Posted on August 9, 2012 by robbinsrealm

After creating substantial buzz as a new sensation in the world of Swedish film with “Show Me Love,” and “Together,” on August 23, 2002, director Lukas Moodysson, premiered his third movie “Lilya 4-Ever” in Sweden. Afterward, the film began making its way around the festival circuit beginning with Italy on August 30, 2002 at the Venice Film Festival; it would go on to be nominated in ten different festivals and took home awards at the Gijon International Film Festival in Spain; the Guldbagge Awards and Stockholm Film Festival, both of which took place in Sweden; and the Rouen Nordic Film Festival in France.

The title character of Lilya is played magnificently by Russian actress, Oksana Akinshina, whose emotionally impactful performance exhibits tremendous range. Her character is a blending of unbending toughness, vulnerability, and school girl innocence whose emotions run the gamut from intermittent moments of ecstasy to disconsolate sadness. As an aside, Akinshina did not speak any English or Swedish and director Moodysson didn’t speak Russian. As a result, in order to communicate with his lead during the making of the film, he had to hire an interpreter. The film’s dialogue is almost entirely in Russian with a few words in both English and Swedish interspersed throughout the movie.

At the start of the film, Lilya is running through the streets both bloody and bruised, the heavy metal song “Mein Herz Brennt” by the German group “Rammstein” is blaring. Where is she running to? Is she escaping some monster the likes of which we would see in a horror movie? Is she running from a human being with monster-like qualities that has caused her injuries? We as viewers don’t yet know the answers to those questions. At the end of her run, she is standing on a bridge overlooking a freeway. Will she jump and end her existence? Is she merely contemplating a way to escape? Again, as with the previous questions, the viewer is left to speculate as to what the outcome will be. Instead, we are taken via flashback to the start of the events that lead the sixteen year old to the moment in time the film opens up with.

We soon come to learn that Lilya was living in utter squalor in her dreary Estonian town, thanks to her mother; a mother who seemed to care more about her own self-preservation than that of her daughter. She has abandoned Lilya by taking off to live in America with a Russian man she met on a dating website. Even though Lilya begs and pleads to join the couple during one of the film’s many heart-wrenching scenes, she is rebuked by her mother (Lyubov Agapova) and forced to travel life’s path devoid of adult guidance, except for her mean Aunt Anna (Liliya Shinkaryova), who removes her from the decent apartment she was residing in with her mother and moves her into a disgusting slum to fend for herself.

Lilya’s only friend is a lonely boy named Volodya (Artyom Bogucharskiy) who has been kicked out of his home by his abusive father, who the viewer only gets a quick glimpse of. Initially, he has a crush on the older teenager and tries to kiss her, an advance she playfully rejects. The boy’s feelings, however, quickly give way to care and concern that transcend adolescent hormones and develop into a genuine friendship. In one of several memorable scenes that stand out, which speaks to the depravity of Lilya’s and Volodya’s situation and the lengths the two will go to in order to escape the reality of their lives, the two resort to sniffing glue, which allows both characters to feel happiness, albeit for a short time frame.

Having no money to purchase food or pay the electric bill, coupled with her aunt’s unwillingness and inability to help, Lilya is forced to use the only commodity she feels she has available to herself, her body. She travels by train to a disco where she knows there will be men all too willing to pay for a sexual encounter with someone her age. While walking home from the disco one evening she meets Andrei (Pavel Ponomaryov). He comes across as one of the world’s nice guys. He lets her know that he’s not looking for sex; he only wants to be her friend. While the attractive Andrei might fool Lilya, he no doubt will raise the radar of most viewers, who will view his actions as those of someone with ulterior motives. Volodya isn’t taken in by Andrei’s actions and comes right out and voices his opinion which falls on deaf ears. Sadly, after just a short courtship, Lilya’s naïveté places her in a position where she is more than willing to follow Andrei to Sweden, where he has promised her not only a job, but his continued love and support. 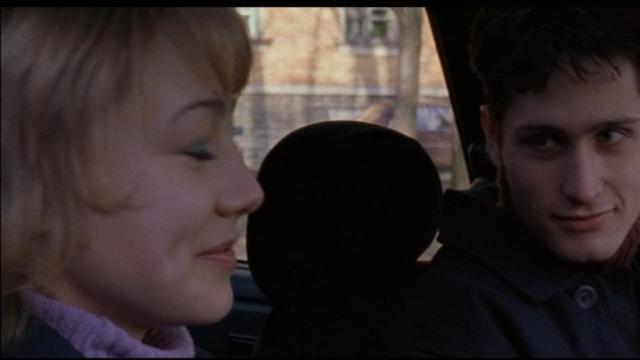 Wasting no time Andrei secures a fake passport for Lilya and sends her on her way. She is, for the first time, a bit taken aback because she was under the impression that they were flying to Sweden together. But, out-of-the-blue, an illness has taken hold of one of his family members and he must join Lilya later. Accepting Andrei’s story, she boards the plane without him and is excited to get to Sweden where she is anticipating a dramatic change for the better in her life. When she arrives in Sweden, you probably guessed it, there is no wonderful job waiting for her. It was all a ruse to lure her there in order to force her into a life of prostitution working for a vile human being named Witek (Tomasz Neuman).

From that moment forward director Moodysson does not hold back, he lets loose a series of clips of men of various ages having their way with the young girl. The viewer is shown things from her perspective. The only solace that is granted to her is when Volodya appears to her in a dream to explain the importance behind the words that she carved into a bench – Lilya 4 Ever – from which the movie got its title. Is he coming to Lilya in her dream state to remind her of the power behind the words she wrote? Does he want to caution her about giving up because she still can reach for higher aspirations if she can break free from the hell on earth that she is currently imprisoned in?

In closing, this film is 109 minutes of masterful cinema that, while certainly not for everyone, should, in this blogger’s opinion, be appreciated by even the most jaded of people and harshest of film critics. I would imagine the film’s detractors would argue that what weakens the movie is that a viewer doesn’t have to put much thought into the inevitability of where Lilya’s life choices will lead her. That is a fair enough criticism to make, but, in this blogger’s opinion, it does not for a minute lessen the burgeoning emotional power with which the film takes hold of viewers from the outset and makes them care about the title character.

In “Lilya 4-Ever,” director Moodysson is able to capture the metaphoric death of innocence by utilizing the harsh reality of the global sex trade whose victims are primarily young women from impoverished backgrounds. These are the women who, like Lilya, will most likely fall victim to anyone who offers them the slightest hope of escaping their economic woes and their seemingly hopeless circumstances. Although I will usually express my own opinions as to how well done or worthwhile I feel something I am reviewing is, I never employ a grading system of any kind in my reviews,  but if I were to give a number grade for a film, this one would garner a 9.5 out of 10.

I was born in Smithtown, New York, and grew up, worked, and lived in various areas of Long Island before moving to Boca Raton, Florida where I now make my home. In addition to being an aspiring writer, I am also an English teacher. I have a Bachelor of Arts in English and a Master’s Degree in Education, both from Adelphi University in Garden City, New York. In my spare time you will find me engrossed in books, watching movies, socializing with friends, or just staying active.
View all posts by robbinsrealm →
This entry was posted in Movies and tagged Artyom Bogucharskiy, Liliya Shinkaryova, Lilya 4-Ever, Lukas Moodysson, Lyubov Agapova, Oksana Akinshina, Pavel Ponomaryov, Tomasz Neuman. Bookmark the permalink.