“Hitchcock’s ‘Vertigo’ The New Number One”

For years now, whenever I would read or watch something that dealt with film critics’ picks for the greatest movies of all time, it seemed that inevitably, the number one choice was always and would always be, the Orson Welles directed, 1941 film “Citizen Kane.” An international poll of critics conducted once a decade since 1952 by “Sight & Sound,” which is a magazine published by the British Film Institute, has finally voted in a new number one, the Alfred Hitchcock directed, seductive thriller “Vertigo.” Thirty-four of the poll’s eight hundred and forty-six votes, the results of which were released August 1st of this year, separated the top two slots and helped to launch the 1958 classic to the pinnacle spot. This latest top ten moved “Citizen Kane” to second place for the first time since the 1962 poll, followed by: director Yasujiro Ozu’s minimalist tour de force, “Tokyo Story” (1953); Renoir’s 1939“La Regle du jeu” (The Rules of the Game); “Sunrise: A Song of Two Humans” (1927), directed by German filmmaker and key impressionist movement figure in the German cinema, F.W. Murnau; world renowned director Stanley Kubrick’s “2001: A Space Odyssey” (1968); the 1956, John Ford directed adventure, western classic “The Searchers,” which starred iconic actor John Wayne; Vertov’s documentary, “Man with a Movie Camera” (1929); Dreyer’s silent film, “The Passion of Joan of Arc” (1928); and Fellini’s drama, fantasy, “8 ½” (1963). This is only the second time in the poll’s long history that Citizen Kane did not garner the number one spot. The other time was the very first poll in 1952 when the top vote-getter was Bicycle Thieves, (originally titled The Bicycle Thief) directed by Vittorio De Sica.

“Vertigo” premiered on May 9, 1958 in San Francisco, California, where the film is set. The 128 minute film was written for the screen by Samuel A. Taylor (Sabrina). Even though Alec Coppel (The Alfred Hitchcock Hour) is credited as a co-screenwriter, he didn’t write a single piece of dialogue in the final script and the only reason his name is listed in the credits is due to contractual reasons. Hitchcock based the film on the 1954 French novel “D’entre les Morts” (From Among the Dead) which was co-authored by Pierre Boileau and Thomas Narcejac and written specifically for Hitchcock after the authors learned that the director had tried to purchase the rights to another one of their novels, “Celle Qui N’etait Plus,” (The Woman Who Was No More) which director Henri-Georges Clouzot turned into the 1955 film “Diabolique.” Interestingly, Taylor didn’t read Coppel’s earlier drafts of the script, nor did he read the novel, only Hitchcock’s original outline of the story. In addition, Maxwell Anderson (Key Largo) contributed to the writing of the screenplay but is not credited in the film. The film’s estimated budget was a little under two and half million dollars and as of January 1998 its worldwide box office take had risen to approximately twenty-five million dollars.

“Vertigo” is director Hitchcock’s haunting story of deception and obsession; a brilliant exploration of anxiety, mind bending fantasy and suspense. A retired San Francisco police detective, John “Scottie” Ferguson, excellently portrayed in an dark and almost neurotic manner by Jimmy Stewart, (Anatomy of a Murder) is traumatized by the psychological affliction of acrophobia (abnormal fear or dread of being at a great height). Sadly, he learns he suffers from the condition during a rooftop pursuit to apprehend a criminal, when he is suddenly frozen by fear, resulting in the death of one of his fellow officers. Even though he is no longer an active member of the force, his work as a detective it not yet over.

Ferguson is contacted by his old college friend, the wealthy and powerful shipping magnate, Gavin Elster, (Tom Helmore) who hires Stewart’s character to keep tabs on his wife, Madeleine, acted hypnotically by Kim Novak (Picnic). WARNING: SPOILER ALERT: As an aside, Novak plays dual roles in the film and is also the character of Judy Barton; with each of her roles Novak demonstrates her acting range by giving a performance that is not only sincere, but also nuanced. Elster explains that Madeleine has become obsessed with her dead ancestor, almost to the point, Elster conveys to Ferguson, where he feels his wife might be possessed by the spirit of the woman; a woman, who committed suicide at age twenty-six, the same age as Madeleine. Reluctantly Ferguson agrees to the task.

At first, to both Ferguson and the viewer, the piece of detective work he is engaging in seems fairly routine; however, it methodically begins to draw him out of his background role of an observer. He shadows her all day as she first visits the grave of Carlotta Valdes, her great-grandmother, who killed herself, only to move onto the Legion of Honor Museum where she sits and stares at a picture titled “Portrait of Carlotta” which features a woman who has the same hairstyle as Madeleine and is wearing the exact same necklace that she wears. These elements, further serve to drive Ferguson into a complex world of intrigue that meshes with his own fantasies and fears. Especially, when Madeleine takes a plunge into the San Francisco Bay and Ferguson has to rescue her from drowning. Thus begins a relationship that divides Ferguson’s sense of morality and loyalty. Does he give into his unyielding desire to be with Madeleine, who he has fallen in love with? Does he opt to remain loyal to Gavin Elster, the man, who put him in the position to meet Madeleine in the first place?

During one particular outing Ferguson and Madeleine visit an old Spanish mission, San Juan Batista, and it is there where Novak’s character’s emotions get the better of her. After a kiss between Ferguson and Madeleine, she gives into her suicidal impulses. She runs up the steps to the top of a bell tower (the real MissionBay has no tower). Ferguson attempts to pursue her, but his fear of heights prevents his reaching the top of the bell tower before she jumps to her death – – or does she? From that moment on Hitchcock takes the viewer on a cinematic ride replete with twists and turns that really have to be seen in order to be appreciated. I’ve watched the film a half dozen times since first viewing it back in the late 1990s and it never once has ceased to keep me at rapt attention and provoke new things for me to think about upon the completion of each viewing.

Deserving credit must also be paid to the stylistic aspects of the film, such as the effective and elegant score composed by Bernard Herrmann (Cape Fear). His music exceptionally enhances the obsessive aspects of the characters in the story; the inspiration for his composition comes from Wagner’s “Tristan und Isolde.” Robert Burk’s cinematography provides a dreamy haze quality to the movie, which combined with the distinctive color schemes utilized by art directors Henry Bumstead (To Kill a Mockingbird) and Hal Pereira (Breakfast at Tiffany’s) are not easily forgettable. In addition, not previously mentioned, actress Barbara Bel Geddes, (Panic in the Streets), has a small supporting role as John Ferguson’s humorous and practical-minded friend Midge.

Trivia buffs take note: Kim Novak was not Alfred Hitchcock’s first choice to play the dual characters of Madeleine and Judy. He wanted actress Vera Miles, (Psycho) but due to her pregnancy, she was unable to commit to the role. Located at 940 Sutter Street in San Francisco, the Empire Hotel, which is featured in the movie, is now called the Hotel Vertigo. It was formerly called the Hotel York. Prior to “Vertigo,” Hitchcock had worked with actor Jimmy Stewart on three other films: “Rope,” (1948), “Rear Window,” (1954) and “The Man Who Knew Too Much,” (1956), but after “Vertigo” they never collaborated again. Hitchcock blamed Stewart’s age on the reason that “Vertigo” was initially a box office and critical flop. The title of the movie is only spoken once during the entire film.

In celebration of Universal’s 100th Anniversary, a DVD and Digital Copy of Vertigo will be released on August 28, 2012. The two disc feature will contain a cinematic treasure trove of special features including, but not limited to: Original and restored theatrical trailers, “Obsessed with Vertigo: New Life for Hitchcock’s Masterpiece,” which is an original documentary; production photos; the ending that was used for foreign theaters; and excerpts from interviews of the master of suspense Hitchcock and influential French filmmaker Francois Truffaut (Jules and Jim). With its multilayered characters acted to perfection by the films leads, excellent use of the city of San Francisco’s locales, captivating color schemes, and classical music score, Hitchcock’s “Vertigo” is must seeing viewing for movie lovers, and especially for those who consider themselves students of film. 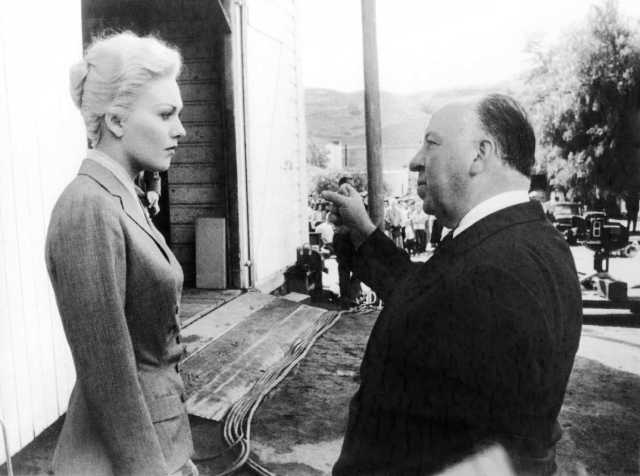 I was born in Smithtown, New York, and grew up, worked, and lived in various areas of Long Island before moving to Boca Raton, Florida where I now make my home. In addition to being an aspiring writer, I am also an English teacher. I have a Bachelor of Arts in English and a Master’s Degree in Education, both from Adelphi University in Garden City, New York. In my spare time you will find me engrossed in books, watching movies, socializing with friends, or just staying active.
View all posts by robbinsrealm →
This entry was posted in Movies and tagged Alec Coppel, Alfred Hitchcock, Barbara Bel Geddes, Bernard Herrmann, D'entre les Morts, Hal Pereira, Henry Bumstead, Jimmy Stewart, Kim Novak, Maxwell Anderson, Pierre Boileau, Robert Burk, Samuel A. Taylor, Thomas Narcejac, Tom Helmore, Vertigo. Bookmark the permalink.

3 Responses to “Hitchcock’s ‘Vertigo’ The New Number One”