The harrowing, tension filled movie “Duel,” was originally a seventy-four minute television film directed by Steven Spielberg (Saving Private Ryan), which first aired on Canadian television on November 10, 1971 and several days later, on November 13th, premiered on American television. I use the word originally, because before the movie was released in Europe as a theatrical film on March 20, 1973 in Norway, Spielberg expanded the film to ninety minutes. Based on a story written by prolific author Richard Matheson (I Am Legend), who also wrote the screenplay, the film would go on to win a 1972 Primetime Emmy for outstanding achievement in “film sound editing,” and the “grand prize” at the 1973 Avoriaz Fantastic Film Festival. 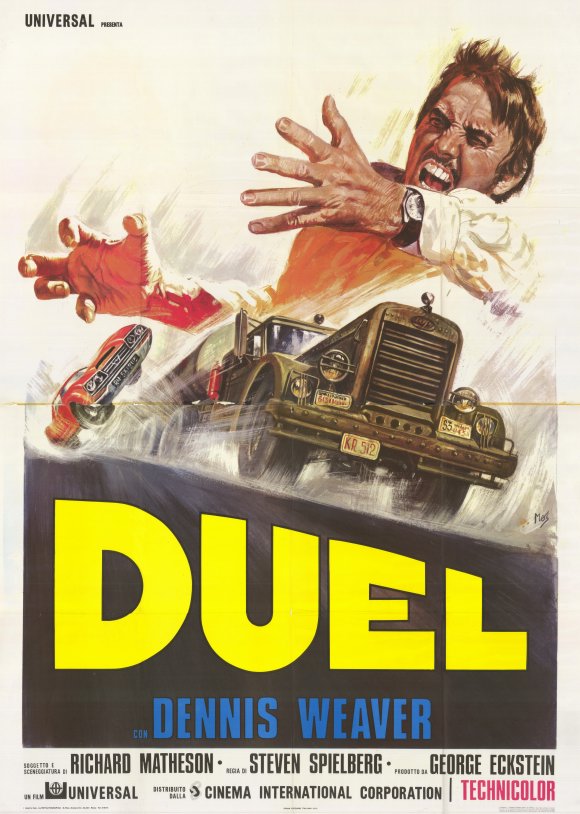 The premise of the movie is rather straight-forward. Actor Dennis Weaver, (McCloud) portrays businessman David Mann, who is attempting to get to a very important appointment before his client leaves for Hawaii; if he fails to do so, then his company might very well lose the client’s account. David’s mode of transportation is a red, 1970 Plymouth Valiant. His route takes him through a long stretch of narrow California roadway which alternates between winding and mountainous – and – flat barren desert. He is only on this road for a short time when he gets stuck behind a slow moving, dirty, diesel-fume spewing, Peterbilt truck. 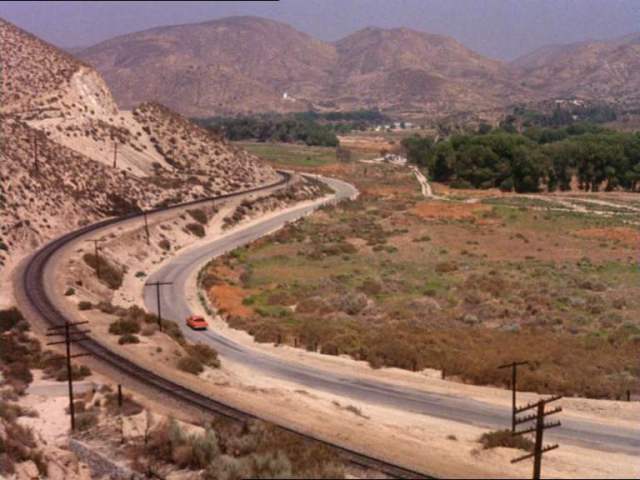 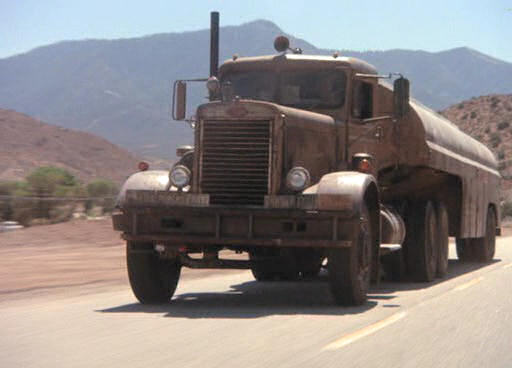 Already under pressure due to the importance of making his meeting time, Mann decides to pass the truck, only to wind up getting passed by the rig, even though just prior to that it had been traveling along at a slow pace. Once the truck passes Mann’s car, it reverts back to the speed it had been traveling at before David had moved in front of it. Not understanding that he is about to make a crucial mistake, David passes the truck for a second time. And once again, the rig driver moves back in front of David – but soon afterwards, extends his arm out the window and waves him to pass. David, thinking it is safe, moves into the lane for oncoming traffic and starts to pass the Peterbilt, only to discover that another car is heading straight for him. That particular moment is the catalyst which begins what will become a deadly game of road rage with only one willing participant.

Much like Spielberg’s blockbuster “Jaws,” (1975) Duel is effective because it invests the proper time in building the gripping suspense, which, in this blogger’s opinion, overtakes a viewer while watching the film. The movie also presents questions that largely go unanswered and are left to the viewer’s imagination. For instance, why is the trucker engaging in a deadly game of cat and mouse with Mann? Was he that offended that David passed him because he was moving slowly? Who is the truck driver? Spielberg never allows the viewer to see the trucker’s face. A hand that waves Mann’s character into a potential head-on collision, cowboy boots that kick at the trucks tires when both David and the trucker stop off at a gas station to re-fuel – that is all we get – or is it? In this blogger’s opinion, in one particularly brilliant scene, after nearly being killed by the truck and having his car slammed into a fence, David leaves his vehicle and enters a nearby roadside eatery named Chuck’s Café. 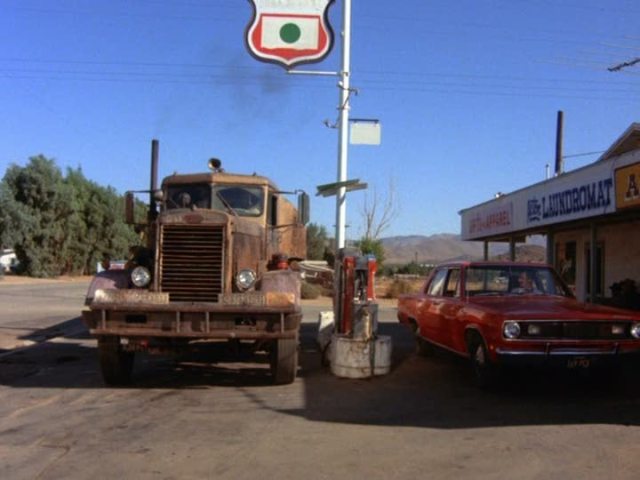 After going into the men’s washroom to wash his face and try to calm down, Mann comes out to order some food. Shortly after sitting down, he looks out the window and discovers, much to his horror, that the trucker has also stopped at the café. He scans the faces and the footwear of the other patrons in the establishment, but unfortunately for him, all the men are wearing cowboy boots and each of them at one point or another looks in his direction to give him a good once over. Before leaving the café, thinking that he has at last discovered the identity of his tormentor, David starts an altercation with a man eating a sandwich, only to soon learn that he has not discovered the identity of the mad trucker, just some guy who stopped off to get a bite to eat.

In addition, a further scene that stands out, due to the breadth of its impact, is when David pulls over at a roadside place dubbed the “Snakearama” in order to phone the police. Mann gets through to the operator, who is about to connect him with the nearest police department. Thinking he is safe and out of harm’s way from the demented trucker, the phone booth proves to be one more potential death trap for Weaver’s character, who narrowly avoids being run over as the Peterbilt plows into the phone booth, not only nearly killing him, but crashing into the glass tanks that are housing the snakes, freeing not only them, but some other creatures as well. 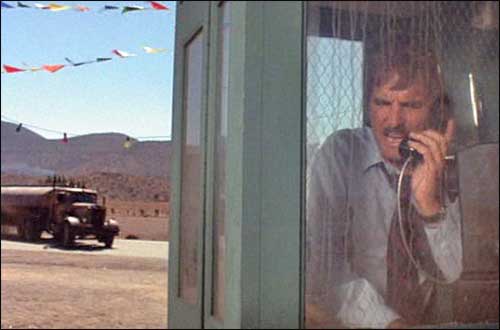 Trivia buffs take note: Three different red, 1970 Plymouth Valiants were used as David Mann’s car during the less than two weeks it took to shoot the movie. Steven Spielberg wanted actor Dennis Weaver for the role of David Mann after watching his performance as the Mirador motel night manager in the 1958 film “Touch of Evil,” which was written and directed by Orson Welles (Citizen Kane). Actor Gregory Peck (To Kill a Mockingbird) was considered for the role of David Mann before it was determined that the film was going to be a television production instead of a theatrical release. Spielberg had his pick of trucks to use for the film, but decided on using the Peterbilt because he felt that the cab of the truck resembled a face.

The majority of the movie is devoid of dialogue, however, it does contain several interior monologues, which allow the viewer to know exactly what David Mann is thinking as he fights for his survival. Some fans of the film opine that it is supernatural in nature, thus the reason why we never see the face of the driver, who is using his truck as a murder weapon. Those same fans feel that perhaps the driver is a demon, who has been replicating the sort of behavior we are watching for a long time now, as evidenced by the collection of license plates of various states that hang on the front of the truck. I don’t think that was what Spielberg was going for, but nonetheless it is an interesting point of view to consider, so I am putting it out there for you to keep in mind and decide for yourself whether you’ve already seen the movie, will be watching it again, or viewing it for the first time. Write me and let me know what you think; as always, I thoroughly enjoy hearing the opinions of any of my readers.

I was born in Smithtown, New York, and grew up, worked, and lived in various areas of Long Island before moving to Boca Raton, Florida where I now make my home. In addition to being an aspiring writer, I am also an English teacher. I have a Bachelor of Arts in English and a Master’s Degree in Education, both from Adelphi University in Garden City, New York. In my spare time you will find me engrossed in books, watching movies, socializing with friends, or just staying active.
View all posts by robbinsrealm →
This entry was posted in Movies and tagged Dennis Weaver, Duel, Richard Matheson, Steven Spielberg. Bookmark the permalink.