Premiering on September 7, 2001 at the Toronto International Film Festival, the movie “Hearts in Atlantis,” primarily concerns itself with a friendship between psychic drifter Ted Brautigan, poignantly portrayed by Anthony Hopkins, (Silence of the Lambs) and a young boy named Bobby Garfield, acted by Anton Yelchin (Like Crazy). The 101 minute film, directed by Scott Hicks (Shine) and written for the screen by William Goldman, (The General’s Daughter) was based on a book by best selling author Stephen King. While the film is taken from King’s work, the story which it presents to the viewer was called “Low Men in Yellow Coats,” and is the first of five stories contained within the novel; however, the film takes its name from the second of the five stories in King’s book.

The movie is shown via flashback from the perspective of an adult Bobby Garfield (David Morse). He is a professional photographer who returns home to attend the funeral of one of his best friends from childhood, John Sullivan (Will Rothhaar). Garfield reflects back to the time of his eleventh birthday, when his greatest desire in the world was to own a bicycle that he has been pinning over, which is on display in the window of a store in his small town. Not having enough funds to purchase the bike, he spends the majority of his time with Sullivan and his other best friend, the tomboyish, Carol Geber (Mika Boorem). In addition to being Bobby’s good friend, Carol also happens to be his first great love. During the film, Hopkins’ character Brautigan tells Bobby, that when he eventually kisses Carol, it will be the kiss by which all others in his life will be judged…and found wanting.

Bobby is being raised by his widowed, working class mother Liz, effectively acted by Hope Davis (The Weather Man). She comes across as selfish; opting to spend money on an array of new dresses instead of buying Bobby a birthday present. The only gift he receives is an adult library card she picked up for him for free. The reason proffered by Liz for his not getting the bicycle – even though she spends money on herself – is that Bobby’s father was never able to pass up an inside straight, so he didn’t leave them any money to speak of; it is a story Bobby has apparently heard on numerous occasions. His attempt to gain further insight into who his father was is in vain because it is a subject which his mother refuses to broach.

Into mother and son’s life comes Ted Brautigan, a mysterious older gentleman, who moves his belongings in paper bags instead of luggage; much to the chagrin of Bobby’s mother. He has come to rent the room in the upstairs portion of the Garfield home. Ted is friendly, attentive, and enjoys spending time with Bobby, but he offers up nothing about who he is and what he has done thus far in his lifetime. Bobby takes an instant liking to him and during the course of one of their earlier conversations, Ted offers Bobby a job, for which he will pay him $1 a week. This was a good deal of money to a child back in 1960, the time in which the film takes place. All Bobby need do to earn the money is read Mr. Brautigan the newspapers, since his eyesight is not what it used to be, and keep watch for any ‘missing’ notices posted by the ‘low men,’ as Ted refers to them, a group of people who are hunting Ted and haunt his thoughts whenever he thinks they are getting too close to capturing him. Bobby doesn’t particularly believe Ted, but when he sees the first strange sign, he rips it down out of fear of losing his new friend who has told him he must leave as soon as the ‘low men’ are near. 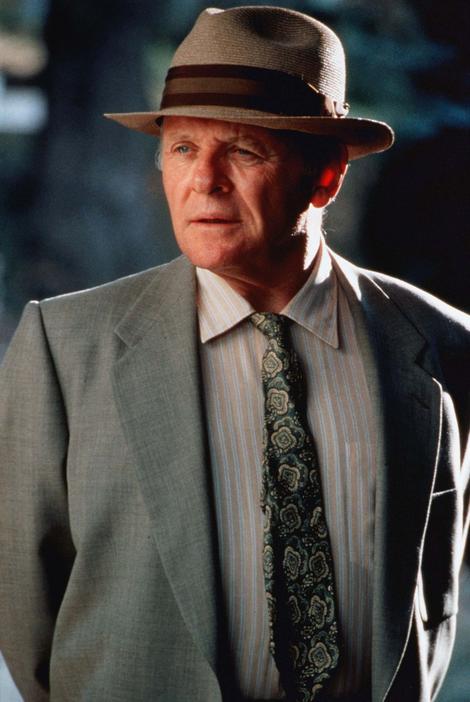 The major problem I had with the movie is that it didn’t go into enough explanation as to who the ‘low men’ were and where they came from. All the viewer does learn, for the most part, is that Ted is being sought by these men, most likely to exploit his psychic abilities, but for what specific purpose? Are these men part of the federal government such as the F.B.I. or C.I.A.? Are they members of organized crime? Is the group a shadowy organization not known to the public at large or something else entirely? I read the book before I saw the movie, but for those who didn’t, and went into the film with no prior knowledge, I would imagine their enjoyment and understanding of the movie was hampered by a lack of explanation.

Scott Hicks does elicit very worthy performances from Hope, Hopkins, and Yelchin, who, as a child, hit all the right notes without overdoing any particular emotion. The cinematography by Piotr Sobocinski (Marvin’s Room) does a more than competent job of showcasing the right look for the character Garfield’s nostalgic journey; it captures the innocence of childhood idealism. In addition, while Hopkins was very believable – I can’t think of a time that I have ever seen him give a disingenuous performance – his character’s extraordinary abilities are not showcased in an exciting manner. He zones out when he goes into what appears to be a hypnotic trance, and yes, he can see things before they happen, as well as having the gift of being able to read minds; but with the exception of one scene where he scares the neighborhood bully (Timothy Reifsnyder) into leaving Bobby and Carol alone, there is not much to keep viewers on the edge of their seats. Considering that the director, according to what he said on the special features section of the DVD, decided not to get into details that were in the book, he could have suggested to Goldman to write some more riveting scenes that would have notched up the energy of the film a little bit.

Trivia buffs take note: King’s character of Ted Brautigan appears in the seventh book of the author’s epic series, “The Dark Tower.” In the novel, Ted’s powers are fully realized as he leads several characters into a closet, which transports them to another land. One of the characters compares the closet in “The Dark Tower” to C.S. Lewis’s magical wardrobe in “The Chronicles of Narnia.” Hope Davis and Anton Yelchin would again play mother and son in the 2007 film “Charlie Bartlett,” directed by Jon Poll. Jeremy Sumpter, who played J.D. McCoy on the NBC football themed drama “Friday Night Lights,” was originally in consideration to play the character of Bobby Garfield.

The turning point of the film “Hearts in Atlantis” happens when Liz goes away on a business trip. She views the trip through the eyes of an idealist, who thinks that being asked to accompany the boss and several of her co-workers is a step toward advancing her career. Little does she know that her employer has designs on her body and is not interested in her brain. Liz wants Bobby to stay at the Sullivan’s house, but they’re going out of town for John’s grandmother’s birthday, so she reluctantly asks Ted if he will watch Bobby. At first Brautigan declines, but when Bobby says that he would like Ted to watch him, he agrees.

While Bobby’s mother is away, Reifsnyder’s character dislocates Carol’s arm. Bobby finds her and takes her to Ted for help. When Liz comes through the door to find the little girl lying on her back with her shirt undone, she immediately thinks the worst, which sets the stage for the remainder of the film. Will Carol be able to persuade Liz Garfield that Ted was helping to mend her arm and not molesting her as she assumes? Will she not listen to Carol and decide to get the police involved, or worse yet the ‘low men’? Will the ‘low men’ catch up with Ted thereby causing Bobby to lose his friend? The film answers those questions and a few more along the way. I really wanted to love this movie, but sadly, I didn’t. I saw it when it was originally in theaters back in 2001, and recently decided to give it another chance to see if my initial feelings about it would change, but they did not. The movie is decent, which is the same feeling I had when I first saw it, so I recommend it to those of you who are fans of Anthony Hopkins, or as I do, want to read and watch anything to do with Stephen King, of whom I am a huge fan.

I was born in Smithtown, New York, and grew up, worked, and lived in various areas of Long Island before moving to Boca Raton, Florida where I now make my home. In addition to being an aspiring writer, I am also an English teacher. I have a Bachelor of Arts in English and a Master’s Degree in Education, both from Adelphi University in Garden City, New York. In my spare time you will find me engrossed in books, watching movies, socializing with friends, or just staying active.
View all posts by robbinsrealm →
This entry was posted in Literature and tagged Anthony Hopkins, Anton Yelchin, David Morse, Hearts in Atlantis, Hope Davis, Mika Boorem, Piotr Sobocinski, Scott Hicks, Stephen King, William Goldman. Bookmark the permalink.

6 Responses to “Hearts in Atlantis”