I remember, when I was growing up, television shows ran new episodes starting shortly after Labor Day in September through about the third week in May. Afterwards, during the summer months, it was all repeats, which I mostly didn’t watch, baseball, which I did, and movies, which I’ve always loved, and fortunately studios release new films year round. These days, numerous cable stations offer new shows on a yearly basis, and have been doing so for quite some time now. None of them, however, whether it be HBO with “The Sopranos,” Showtime with “Dexter,” or “The Walking Dead” on AMC, ever released their entire season of episodes at one time. On February 1st of this year, Netflix did just that, becoming the first by releasing all thirteen episodes of their original program “House of Cards,” all at once. 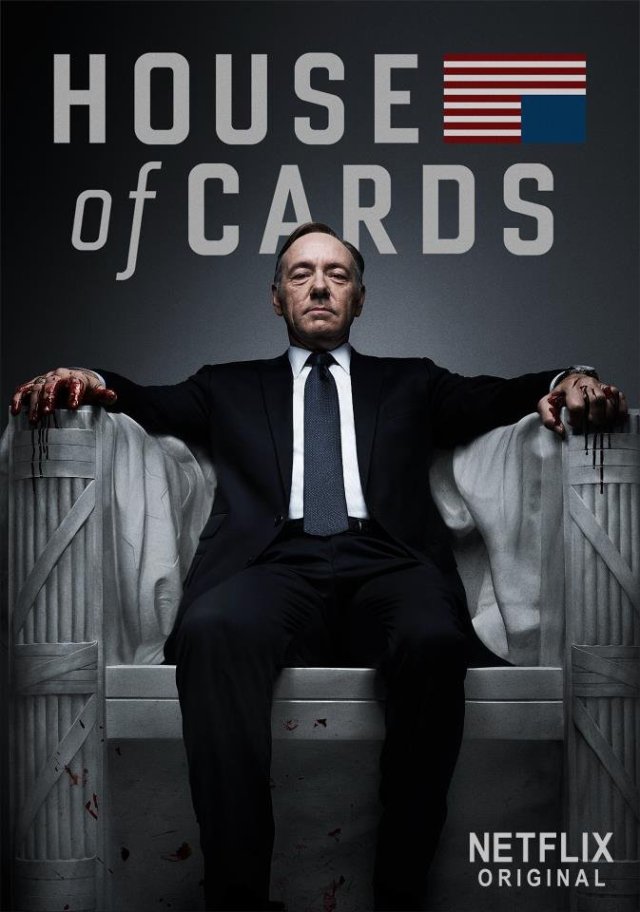 The well written, directed, and engaging series is an adaptation of a British political thriller of the same name that was released as a mini-series back in 1990. I didn’t see that series, based on the novel by Michael Dobbs, who is a British author and politician, so I’ll refrain from commenting on it. The Netflix offering is from a cadre of executive producers which includes David Fincher, (The Girl with the Dragon Tattoo) writer Beau Willimon, Dana Brunetti, Joshua Donen, writer Eric Roth, (Munich) and Kevin Spacey. The show revolves around several key characters involved in the world of Washington D.C. politics. It is not, however, your standard political drama, instead it concerns itself with the characters’ thirst for power, their egos, and addictions.

Kevin Spacey, (American Beauty) gives a consistently commanding performance as House Majority Whip, South Carolina congressman, Francis ‘Frank’ Underwood, who is a master manipulator. Most of the time, I don’t like it when a character breaks the fourth wall by speaking directly to the camera as if they are addressing me personally, but on this show it works perfectly. Underwood, not only reveals what he is truly thinking regarding his emotions, and those who he interacts with, but he also gives information about his past, and allows the viewer access to his schemes. The motives for Underwood’s behavior are made clear during the first episode. He is seeking to exact revenge against the President-elect of the United States, (Michael Gill) a man Frank threw his political clout behind, revenge stemming from a promise to make him the Secretary of State. It is a promise, viewers learn, the newly elected President has gone back on by giving the position to Senator Kern (Kevin Kilner).

In addition to Spacey, the outstanding ensemble cast includes Robin Wright, (Forest Gump), a woman, who according to Frank, he loves more than sharks love blood. She plays Underwood’s intelligent, conniving and ambitious wife Claire, who runs the non-profit organization CWI (Clean Water Initiative). Spacey’s character also enters into a mutually beneficial relationship with Kate Mara’s (American Horror Story) Washington Herald journalist, the amoral, Zoe Barnes. She is seeking to elevate her professional standing, and is able to do so thanks to Underwood feeding her information that he wants out for public consumption. Corey Stoll (The Bourne Legacy) as Peter Russo portrays a young alcohol drinking, drug using congressman. He gets ensnared as part of Underwood’s Mephistophelian plot to get his revenge against the President, when after he is busted for DWI – with a prostitute in the car no less – he is released from jail without any consequences. From that moment on, he will serve at Underwood’s behest. One such task involves Russo traveling to meet a former college radical who worked on the school paper when Senator Kern was in college, in order to find any political dirt on Kern. Russo succeeds in bringing Frank an article which Kern was involved with that has an anti-Israel slant to it. When confronted by the media about the article, Kern goes on the defensive just as Underwood knew he would, and in the process, he not only makes a fool out of himself, but is removed as Secretary of State. Frank also is helping Peter in regard to getting clean and sober before persuading the powers that be to launch Russo as a gubernatorial candidate for the State of Pennsylvania, but Underwood’s motivations are anything, but altruistic. Rounding out the cast are: Christina Gallagher, (Kristen Connolly) Russo’s secretary and girlfriend, who seems to genuinely love and care about him with no ulterior motives; Underwood’s devoted and devious right hand man, Doug Stamper, (Michael Kelly); Chief of Staff, Linda Vasquez (Sakina Jaffrey), no one gets access to the President without her say so; as well as a host of other secondary characters that appear throughout the first season.

I am not going to do an episode by episode break down of the entire series. That would make this particular blog far too long, and ruin the pleasure I hope you will derive from watching the series, if you haven’t already. I found the first season of “House of Cards” to be addictive; at one point I watched five episodes straight, and it seemed as though very little time had passed. Netflix has already committed to 26 episodes of the series, so there will be a second season, which I eagerly look forward to visually devouring.

I was born in Smithtown, New York, and grew up, worked, and lived in various areas of Long Island before moving to Boca Raton, Florida where I now make my home. In addition to being an aspiring writer, I am also an English teacher. I have a Bachelor of Arts in English and a Master’s Degree in Education, both from Adelphi University in Garden City, New York. In my spare time you will find me engrossed in books, watching movies, socializing with friends, or just staying active.
View all posts by robbinsrealm →
This entry was posted in House of Cards and tagged Corey Stoll, David Fincher, House of Cards, Kate Mara, Kevin Spacey, Michael Dobbs, Robin Wright. Bookmark the permalink.

10 Responses to “House of Cards”