“The Day of the Jackal”

Before I begin this week’s blog, I would like to express my gratitude to Marc from http://loveyourmovies.wordpress.com He has afforded me the opportunity of twice being a guest blogger on his site and I greatly appreciate it. If you aren’t already a follower of his blog, and are a film fanatic as yours truly is, check out Marc’s posts and podcasts.

Premiering on May 16, 1973 in New York City, the film “The Day of the Jackal,” is based on best selling author Frederick Forsyth’s (The Dogs of War) 1971 suspense novel of the same name. The 143 minute thriller was directed by two time Academy Award winner Fred Zinnemann, (From Here to Eternity) and written for the screen by Kenneth Ross (The Odessa File). The movie deals with a fictionalized assassination attempt on the life of former French general and President (1959-1969), Charles de Gaulle. 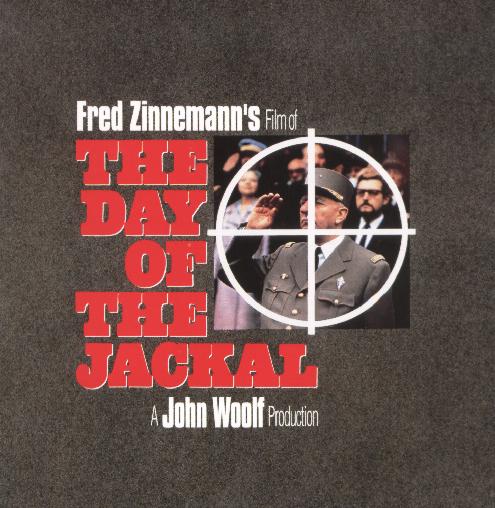 August of 1962: President de Gaulle has given independence to Algeria, something which does not sit well with a paramilitary organization known as the OAS. As an act of revenge, the group is seeking to assassinate the French leader. As depicted in the opening scene of the film, after a failed attempt by members of their own group to kill de Gaulle, (Adrien Cayla-Legrand) a three month search is conducted by the top leaders of the OAS to find a professional contract killer. The reasoning for this is not only because they haven’t been able to get the job done themselves, but the top commanders are fearful that there are intelligence leaks within the organization.

Enter the Jackal – convincingly portrayed by Edward Fox (The Bounty) – a well groomed and properly attired Englishman, a man whose real name the viewer never learns. As a matter of fact there is no back story given for the character, but we do come to find out how intelligent, resourceful, and ruthless he is. There are two things the Jackal requires before taking the job: the sum of $500,000 and absolute secrecy. The leaders of the OAS agree to the Jackal’s terms, but to pay him his asking price, their members must first hold up banks and ambush armored cars to obtain the money. The foot soldiers that are carrying out the orders are never told what the money is for, in the event they are captured. After the OAS deposits $250,000 in the Jackal’s Swiss bank account, he begins his meticulous preparations. As an aside, Michael Caine, (Deathtrap) Jack Nicholson, (A Few Good Men) and Roger Moore, (A View to a Kill) were all considered for the part of the Jackal, but Zinnemann wanted the role to be portrayed by someone that audiences didn’t already have a connection to. 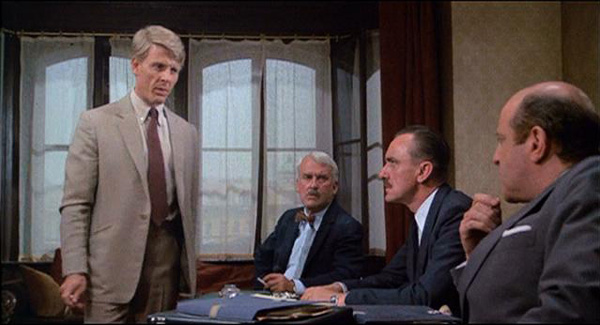 Of course, the OAS plans are learned by the French government. The movie would be a pretty dull film if it was smooth sailing for the Jackal to assassinate de Gaulle without any obstacles. From the moment the OAS plans are discovered, the plot begins to alternate between the Jackal’s painstaking preparations and advancement toward the fateful day when the assassination is to be carried out, and the actions of his polar opposite, the unwaveringly determined Deputy Police Commissioner, Claude Lebel, portrayed by Michael Lonsdale (Munich). 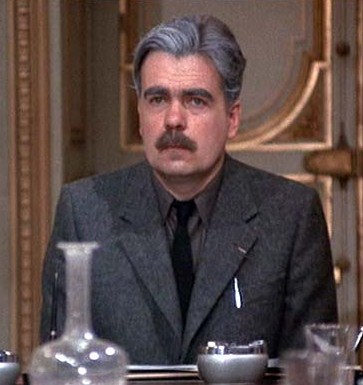 Lebel is appointed the herculean task of hunting down the Jackal before the assassination can take place. At first, his character depicts a prevailing sense of unease and he feels that he is not up to the challenge of capturing the illusive Jackal; but as the search for the assassin gets more involved, his character transforms into an aggressor who projects confidence. Once that happens, it sets up a captivating game of cat and mouse between the two characters, with the Jackal always managing to stay one step ahead of his pursuer.

In addition to Fox and Lonsdale, the supporting players are all uniformly competent. In the event of a leak – which did occur – and as a further safe guard, the OAS assigns a female operative, Denise, (Olga Georges Picot) whose fiancée was killed in Algeria, to get close to a high government cabinet minister, so she can report on what actions the government is taking in order to protect de Gaulle; this in turn aids the Jackal. There is Cyril Cusack (Harold and Maude) as a gun maker who assembles the murder weapon for the Jackal, a most unusual looking gun; Derek Jacobi (My Week with Marilyn) as Caron, Lebel’s dedicated and indispensable right hand man, as well as Scotland Yard investigator Inspector Thomas (Tony Britton) who is assisting with the manhunt. Delphine Seyrig, (The Discreet Charm of the Bourgeoisie) acts the role of Colette, a wealthy woman, whose sexual encounter with the Jackal may lead to her undoing. Those are just several members of the rather large and talented cast that help to advance the narrative throughout the film. Instead of a musical score, there are merely sound effects, which add a greater sense of realism to what is transpiring on screen. Cinematographer Jean Tournier (The Train) does an outstanding job of capturing the European locations and bringing them to life.

Will the OAS get their revenge using the Jackal as their instrument of execution? Does Lebel figure out the true identity of the ghost who is haunting his every waking hour before it is too late? What circumstances lead to the Jackal’s eventual success or Lebel’s thwarting of the assassination of de Gaulle? All of those questions and more will be answered while watching the well paced and compelling film.

I was born in Smithtown, New York, and grew up, worked, and lived in various areas of Long Island before moving to Boca Raton, Florida where I now make my home. In addition to being an aspiring writer, I am also an English teacher. I have a Bachelor of Arts in English and a Master’s Degree in Education, both from Adelphi University in Garden City, New York. In my spare time you will find me engrossed in books, watching movies, socializing with friends, or just staying active.
View all posts by robbinsrealm →
This entry was posted in Movies and tagged Edward Fox, Fred Zinnemann, Frederick Forsyth, Jean Tournier, Kenneth Ross, Michael Lonsdale, The Day of the Jackal. Bookmark the permalink.

10 Responses to “The Day of the Jackal”