The thoroughly engaging, 122 minute film, “Silver Linings Playbook,” which is a skillful mix of comedy, drama, and romance, premiered on September 8, 2012 at the Toronto International Film Festival. Made for a budget of approximately twenty-one million dollars, the movie would go onto gross close to one-hundred and thirty-two million, and win, amongst numerous other awards, the AFI (American Film Institute) Award for movie of the Year, the BAFTA (The British Academy of Film and Television Arts) for best adapted screenplay, and earn Jennifer Lawrence a well deserved Oscar for Best Actress. 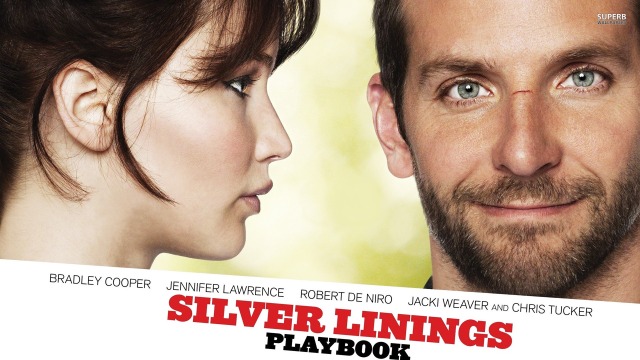 I started watching the movie not knowing much about the film, with the exception of its cast and director. I have seen almost every movie that Academy Award winning actor Robert De Niro (Goodfellas) has appeared in, and count a number of them amongst my favorite films of all time. I enjoyed Jennifer Lawrence’s performance as Mystique in “X-Men: First Class,” and, for that matter, think she does a more than competent job in every role she takes on. Bradley Cooper, I have known about since he portrayed the character of journalist Will Tippin on “Alias,” which ran on ABC television from 2001-2006. I remembered actress Jacki Weaver from the 2010 Australian film “Animal Kingdom,” and Chris Tucker from the “Rush Hour” movies. Director and screenwriter David O. Russell, I knew from his Oscar nominated film “The Fighter.” I had never read the book, “Silver Linings Playbook,” written by Matthew Quick, on which the movie was based, nor had I seen a trailer for the film, so I was basically going in cold. As I waited for the movie to begin, I wondered if I would  like it. It didn’t take long for me to answer that question; and the answer was a resounding ‘yes.’ 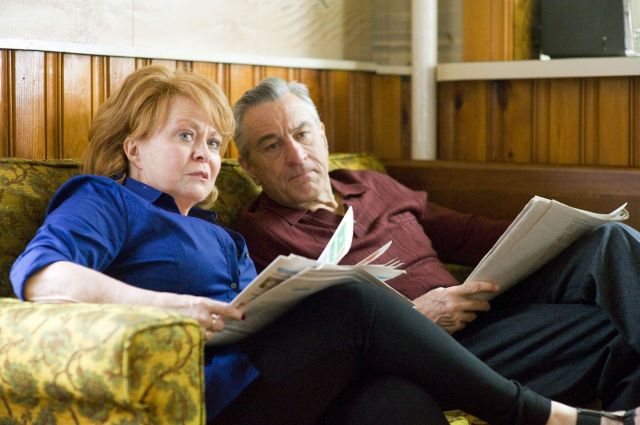 Pat Solitano (Cooper) is a former substitute teacher who has been diagnosed with bipolar disorder. Throughout the film, Pat’s emotions will run the gamut from charming, honest, and naïve, to angry and frustrating. He has just been released, against medical advice, into the care of his mother, Dolores, (Weaver) from an eight month court-ordered stint in a mental institution, in Baltimore, Maryland. She is taking him back to their suburban Philadelphia home to live with her and his father, Pat Sr., (De Niro) who has OCD. Pat Sr. loves his son, but feels the only way they can bond is through his obsessive fandom for the Philadelphia Eagles football team. His OCD makes it so that Pat Sr. truly believes that the Eagles’ winning and losing games hinges on quirky things he does, such as shifting the placement of the remote controls, and upon Pat Jr. watching the games with him.

Cooper’s character being released and allowed to live with his parents is contingent upon several conditions. He has to continue to take his medication, attend therapy sessions with Dr. Patel, (Anupam Kher) and refrain from having any contact with his ex-wife, Nikki (Brea Bee), who has a restraining order against him. Prior to being institutionalized, Pat arrived home early from work one day, and his wedding song, “My Cherie Amour,” sung by Stevie Wonder, was playing on the CD player. His ex-wife, an English teacher, was in the shower having sex with one of her colleagues. Pat proceeded to beat the tar out of the man and, fortunately for him, was able to take a plea deal to avoid prison. And while it is true that Pat wants to get his teaching job back, all he really can think about on his arrival home is winning his ex back. He reads the books Nikki assigns on her syllabus; he exercises, because she had been complaining about his weight; decides that he will be more attentive, especially to her needs, and, just when he thinks he is on the right course to rekindle their relationship, he meets Tiffany (Lawrence).

Pat runs into his friend Ronnie, (John Ortiz) who invites him to attend a dinner party given by his wife Veronica (Julia Stiles). Veronica is friends with Nikki, so Pat reluctantly agrees to go, figuring that perhaps he can demonstrate how much he has changed and word will get back to Nikki. Shortly after arriving at his friend’s home, he meets Tiffany. She is a widow who has had serious issues of her own since the death of her husband, a police officer, who got hit by a car while helping someone. She often comes across as abrasive during the film’s runtime. Lawrence really sells this role, and becomes one with the meticulously developed and vivid character of Tiffany. Pat leaves with Tiffany after they discuss the various medications they have taken to help cope with their respective lives. He walks her home and, right before he is about to leave, she offers to have sex with him provided he keeps the lights off; it is an offer which Pat declines. 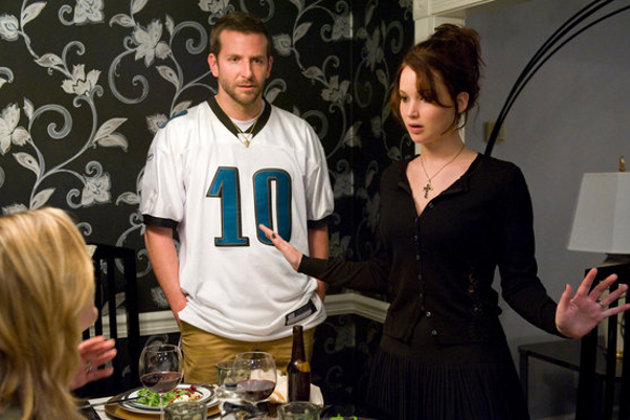 The two keep running into each other, only later on in the film is it revealed how that keeps happening. Eventually, Tiffany makes the offer to Pat to get a letter to Nikki, but she is tired of giving people all of herself and getting nothing in return. She is entered in a ballroom dance competition and needs a partner. If Pat will dance with her, she will get the letter to Nikki; he agrees. The rest of the film, however, is not smooth sailing. 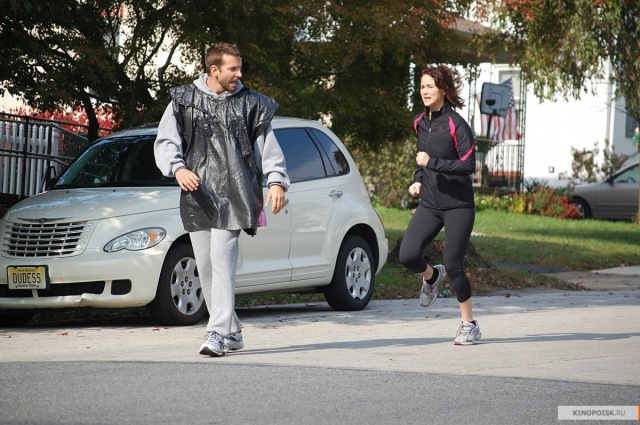 While Pat’s personal motto might be ‘Excelsior,’ which means ‘still higher,’ and is the motto for the State of New York, he is still prone to outbursts as a by product of his bipolar disorder. Two scenes in particular highlight his condition: One where he rips a magazine rack apart at Dr. Patel’s office because his wedding song is playing on the loud speaker in the waiting room, and the other when he flips out while looking through his parents’ house for his wedding VHS tape. In the process, he accidently hits his mother and gets into a fight with his father, resulting in bruises for both men. The pressure really gets turned up a few notches, when Pat Sr. takes a double or nothing parlay bet from his friend Randy (Paul Herman). If Pat Sr.’s Eagles can beat Randy’s Dallas Cowboys, and if Tiffany and Pat can score at least a five out of ten at their ballroom dance competition, Pat. Sr. wins. If either of those things fails to happen, he will be left with nothing, and have all of his dreams regarding opening his own diner shattered. 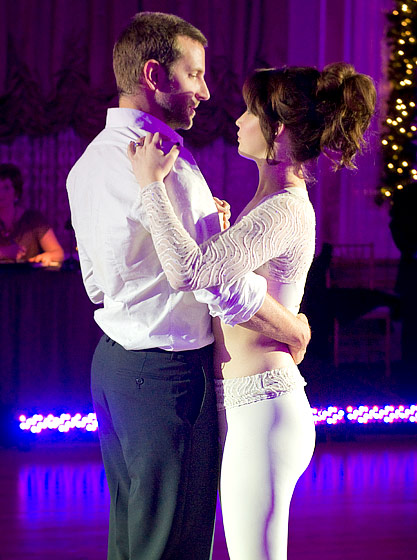 Will Pat be able to let go of his unhealthy negativity and the emotional baggage associated with trying to get back together with Nikki? Does he wind up falling in love with Tiffany? Do the Eagles beat the Cowboys? Do Pat and Tiffany come up short at the dance competition or do they earn their five? If you’ve been reading this blog for a while now, you know there is no chance I am going to reveal that information. What I will say, is that I can’t recommend “Silver Linings Playbook” highly enough. It certainly deserved all of the praise that was heaped on it, and was one of the best movies I saw in 2012. 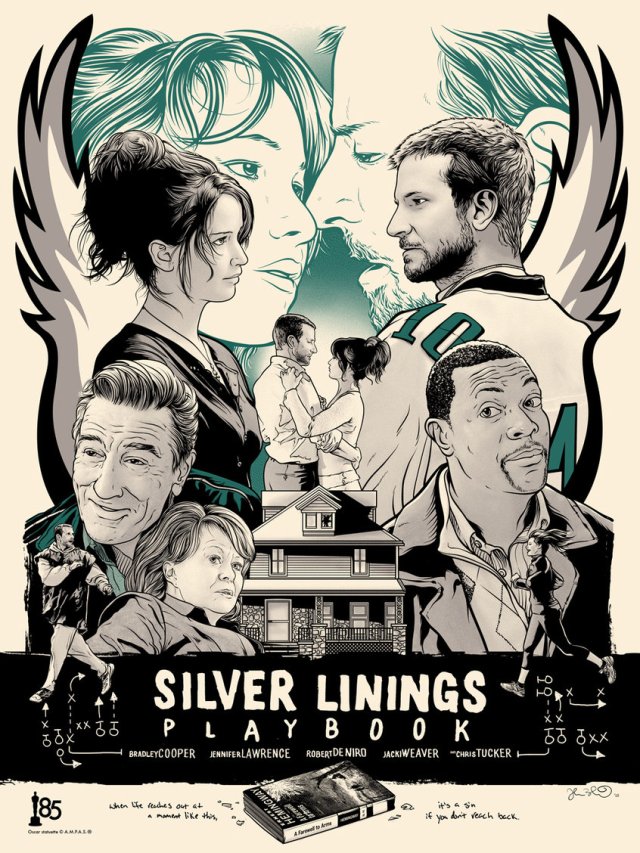 I was born in Smithtown, New York, and grew up, worked, and lived in various areas of Long Island before moving to Boca Raton, Florida where I now make my home. In addition to being an aspiring writer, I am also an English teacher. I have a Bachelor of Arts in English and a Master’s Degree in Education, both from Adelphi University in Garden City, New York. In my spare time you will find me engrossed in books, watching movies, socializing with friends, or just staying active.
View all posts by robbinsrealm →
This entry was posted in Movies and tagged Anupam Kher, Bradley Cooper, Brea Bee, Chris Tucker, David O. Russell, Jacki Weaver, Jennifer Lawrence, John Ortiz, Julia Stiles, Matthew Quick, My Cherie Amour, Paul Herman, Robert De Niro, Silver Linings Playbook, Stevie Wonder. Bookmark the permalink.