Posted on September 10, 2013 by robbinsrealm

Premiering at the San Sebastian Film Festival in Spain in September of 1975, “Dog Day Afternoon” is a mixture of the genres of crime and drama. The critically acclaimed 125 minute movie was helmed by Golden Globe and honorary Oscar winner, Sidney Lumet (Network). Frank Pierson (Presumed Innocent) based the script on a 1972 Life Magazine article about an actual bank robbery, entitled “The Boys in the Bank,” which was co-written by P.F. Kluge and Thomas Moore. Pierson’s script won him the 1976 Academy Award for Best Writing, Original Screenplay. 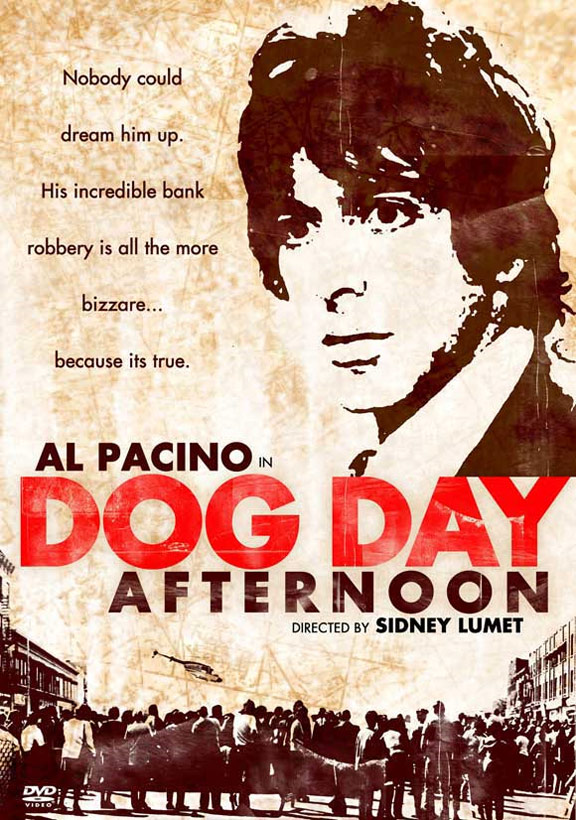 The film centers on two men, who are holding eight people hostage on a sweltering, New York day as the result of a Brooklyn bank robbery gone awry. The reasons for their actions are not made clear initially, leaving one to speculate that the heist is entirely greed based. Al Pacino (The Godfather), who has won the Oscar and Golden Globe, in addition to multiple other accolades, including, the Cecil B. DeMille Award in 2001, portrays Sonny Wortzik, one half of the bank robbing duo. Pacino’s character is multi-layered. He is a man who is flawed. At times he demonstrates his caring and concern for other people; in other instances he garners the viewer’s sympathy; but ultimately, he is delusional when it comes to the reality of the situation. (As an aside, the Cecil B. DeMille Award, named after the legendary director, has been given by the Hollywood Foreign Press Association for lifetime achievement in motion pictures, since 1952.)

The name of the real bank robber who Pacino brilliantly emulates was John Wojtowicz. John Cazale (The Godfather Part II), appears in the role of his partner, the not-so-bright, and increasingly frightened, Sal, who can’t believe everything that is transpiring. Originally, the two were joined by a third accomplice, Stevie (Gary Springer); however, his fear kicked in before things started to go downhill, so Sonny let him leave.

Ironically, even though, the robbery is taking place at day’s end, there is very little money in the bank vault. The bulk of the day’s cash had already been picked up by an armored car service. In order to make the job worthwhile, Sonny steals the bank’s travelers’ checks, but makes a key mistake by attempting to destroy evidence rather than exiting the bank. He stops to burn the registry, instead of taking it with him and getting rid of it later. The smoke coming out of the building, from the fire he has set in the garbage can, attracts the attention of a shop owner across the street, who comes to check on the situation. Sonny allows the bank manager, Mr. Mulvaney, (Sully Boyar) to assure the shop owner that everything is okay. Apparently it doesn’t do the trick, because shortly thereafter, the phone rings. Sonny instructs Mulvaney to answer it; he does, and hands the phone to him. The police have been alerted. They have the building completely surrounded, and more of them seem to arrive in droves by the second; then things really heat up after that.

The first member of law enforcement to make contact with Sonny is Captain Moretti, in a supporting role excellently performed by Charles Durning (Tootsie). He doesn’t mince words when he first speaks to Sonny, instead he informs him of how utterly hopeless his chance for escape is. He asks him to come outside, in order to see the sheer mass of the police presence that has assembled outside the bank. Sonny does so; letting Moretti know that if anything happens to him when he is outside, Sal will start offing hostages. After Sonny steps out and talks to Moretti, there is an iconic scene where he starts yelling at the police to put their guns down and also begins to walk back and forth in a frenetic manner while repeatedly yelling the word “Attica!” This riles the crowd up and they begin to cheer for him.

What Pacino’s character is referring to is what transpired at the Attica Correctional Facility, which is a maximum security prison in New York State. On September 9, 1971, inmates assaulted a guard and began rioting, which eventually led to them taking employees hostage, and also gaining control of certain sections of the prison. Once the prisoners had control of those sections of the prison and while they continued to hold prison employees hostage, negotiations between the inmates and prison officials ensued. During negotiations, the prisoners demanded, among other things, better living conditions, and educational classes, as well as skill training. The negotiations faltered, leading then Governor Nelson Rockefeller to order the prison to be taken back by force. On September 13, tear gas was dropped into Attica, followed by the storming of the prison by state troopers, who opened fire on 1,200 inmates. When the smoke cleared, thirty-nine people in total had been killed; the dead were twenty-nine inmates and ten hostages. Eighty people were also injured, most of them were inmates.

Once Sonny goes back inside the bank, and as the hours go by, the media attention grows, and at one point Sonny is being interviewed via telephone by an anchor from one of the major networks. As more information about Sonny is learned by the press, it is continually being released to the public. This information causes some of the same people who cheered for him hours earlier to begin to boo him. He is also jeered by onlookers when his mother (Judith Malina) comes to see him at the bank to try to talk him out of what he is doing, and he tells the police to take her away. Seeing no other alternative, Sonny asks for a limo to take him, Sal, and the hostages to the airport, and to fly them out of the country. For everything Sonny gets, he is willing to give up one hostage. The rest will be flown back, once he and Sal are safely out of the country.

In addition to the actors I have already mentioned, there are a number of supporting actors in the cast who are worthy of mention. First, there is Chris Sarandon (Fright Night), who was nominated for the Oscar for Best Actor in a Supporting Role for his part as Leon. His is a vital role because his character is directly related to why Sonny wanted to hold up the bank in the first place. I am not revealing the reasoning, as I don’t want to spoil it for those of you who haven’t seen the film yet. Mention must also be made of James Broderick (The Taking of Pelham One Two Three) as the calm, calculating, and direct F.B.I. agent, Sheldon. For those of you who are Sopranos fans, Dominic Chianese, who played the role of Tony Soprano’s uncle Junior is cast in the role of Pacino’s father.  Two other actors of note in the film are: Carol Kane (When a Stranger Calls) as Jenny, one of the hostages; as well as Lance Henriksen (Aliens) as F.B.I. agent Murphy. The film is almost completely devoid of a soundtrack, with two exceptions. At the start of the movie, Elton John’s song “Amoreena” from his 1970 album “The Tumbleweed Connection,” is played during a montage of clips of Brooklyn’s residents engaged in a variety of activities. When the montage comes to its end, the viewer finds out that the would-be bank robbers have been listening to the song on their car radio right before they head into the bank. The song “Easy Livin” by Uriah Heep can also be heard very briefly.

Will any of the hostages be killed? Can either Captain Moretti or F.B.I. agent Broderick persuade Sonny and Sal to give up before anything truly terrible happens? Does Sonny successfully negotiate his and Sal’s way to freedom? This is an absolute must see film for fans of actor Al Pacino, of director Sydney Lumet, and of top notch cinema. 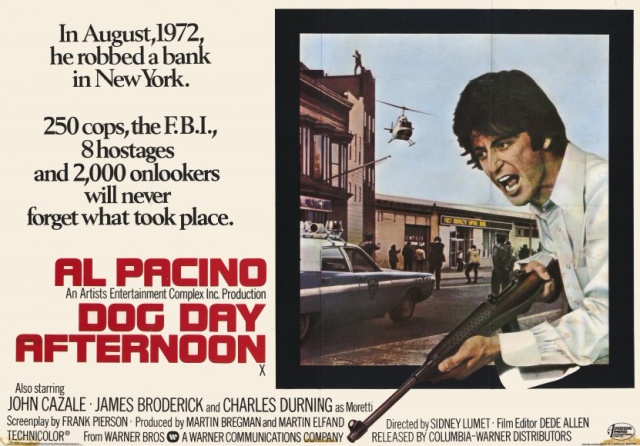 I was born in Smithtown, New York, and grew up, worked, and lived in various areas of Long Island before moving to Boca Raton, Florida where I now make my home. In addition to being an aspiring writer, I am also an English teacher. I have a Bachelor of Arts in English and a Master’s Degree in Education, both from Adelphi University in Garden City, New York. In my spare time you will find me engrossed in books, watching movies, socializing with friends, or just staying active.
View all posts by robbinsrealm →
This entry was posted in Movies and tagged Al Pacino, Attica, Carol Kane, Cecil B. DeMille Award, Charles Durning, Chris Sarandon, Dog Day Afternoon, Dominic Chianese, Frank Pierson, Gary Springer, James Broderick, John Cazale, John Wojtowicz, Judith Malina, Lance Henriksen, P.F. Kluge, San Sebastian Film Festival, Sidney Lumet, Sully Boyar, Thomas Moore. Bookmark the permalink.