Posted on October 8, 2013 by robbinsrealm

The atmospheric, effective, and tension filled “The Conjuring,” directed by James Wan (Saw), premiered at the “Nocturna, Madrid International Fantastic Film Festival” in Spain on June 8, 2013.  Written for the screen by twin brothers, Chad and Carey Hayes, (Whiteout), the film was made for an estimated budget of twenty million dollars, and has so far gone on to gross close to one hundred and forty million dollars. The soundtrack, composed by Joseph Bishara (Repo! The Genetic Opera), is jarring in the appropriate places and helps to elevate the scares.

The 112 minute movie, which is parts horror and thriller, focuses its content on the 1971, purportedly true, haunting of the Perron family. The stay-at-home mother, Carolyn, is convincingly portrayed by Lili Taylor (Hemlock Grove), especially during some of the more intense scenes her character is involved with. Roger, the family’s likable patriarch, is a truck driver, a role acted by Ron Livingston (Office Space). The parents move into their new Rhode Island farm house, along with their five daughters: Andrea (Shanley Caswell), April (Kyla Deaver), Christine (Joey King), Cindy (Mackenzie Foy), and Nancy (Hayley McFarland). The children in the family are well cast, as is everyone involved in the film. Even though there was not a good deal of time devoted to showcasing the individual members, Wan gives the viewer enough insight into the family; a family that seem to genuinely care for one another. I wound up being invested in what happened to their characters, and not wanting to see them fall victim to that which was haunting them. Playing an integral part in the storyline is the husband and wife team of paranormal investigators, Ed and Lorraine Warren, who are attempting to rid the Perron’s house of the evil spirit of a long dead, devil worshiping witch, who puts a punishment curse on anyone who tries to encroach upon the land.

The film opens with a scene about two roommate nurses who are having trouble with a very creepy looking doll named Annabelle. The nurses feel that the doll is possessed by an evil entity. The reason they feel this way is because the doll moves of its own volition when they are at work, and also writes notes to the roommates. In an attempt to get rid of the disturbing presence that they feel is residing inside of their apartment, the nurses throw the doll into a garbage bin. The roommates are horrified to discover, upon arriving home after work, that Annabelle is back inside of their apartment. The Warrens are contacted; they offer explanation as to why the doll is acting the way it is, and remove it from the property to a room in their home that houses all of the evil objects they have collected during their investigations. 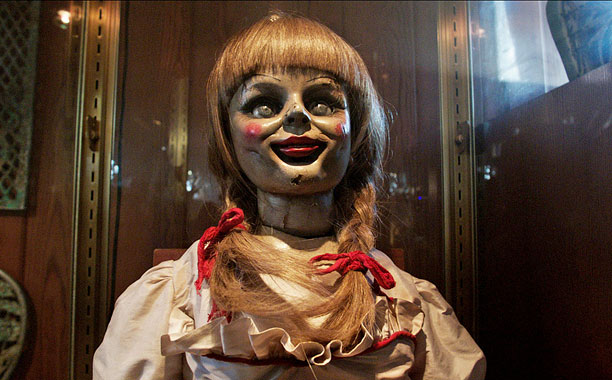 The scene is not merely filler; it delineates the separation between the Warrens and the Perrons. Vera Farmiga (Bates Motel) and Patrick Wilson (Insidious) have an excellent on-screen chemistry. I didn’t for one second doubt the characters love for one another, nor the passion that they bring to their work. Even though the film only concerns itself with the Perron’s haunting, the background information that is established regarding the paranormal investigative couple held my interest. The Warrens, who consider this particular case to be the scariest they ever worked on, explain to the viewer who and what they are all about via speaking in lecture halls, conducting an interview, and interacting with a couple who feel they are being haunted. In that case, it turns out that the age of the couple’s house and old pipes are responsible for the strange noises they are hearing and not the paranormal. The scenes that focus on the Warrens run parallel with what is happening to the Perrons, so that when the characters come together it makes for a smooth transition. 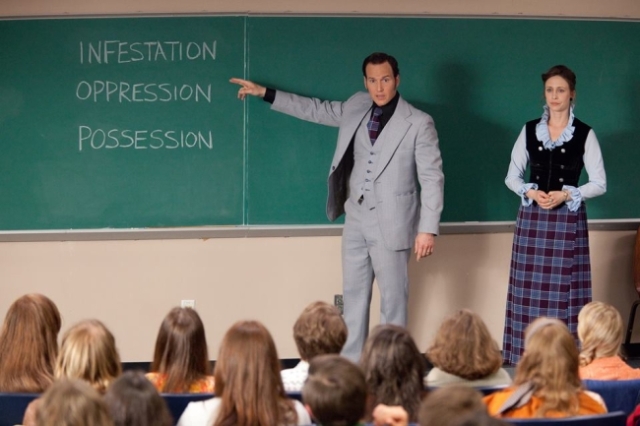 The Perrons purchase a house in an isolated area looking to start anew. No sooner, do they move into their new home, which needs a considerable amount of sprucing up, then odd things begin to happen. The clocks stop working every morning at 3:07 A.M.; strange knocking occurs; and a hidden and unheard shadowy presence, standing behind the door of one of the children’s bedrooms, scares two of the Perron’s children by stating that it wants to kill the entire family; and that’s just some of what transpires – it gets progressively worse from there. To write exactly what those things are would be doing a tremendous disservice to those of you who have not yet seen this modern day horror gem. 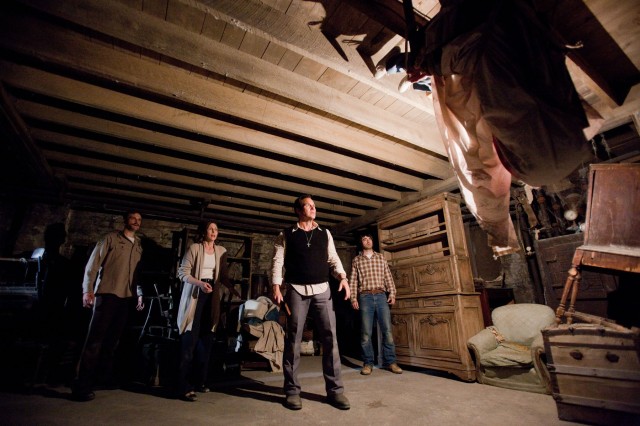 What lengths will the Warrens have to go to in order to help rid the Perrons of the evil that haunts their home and will they be successful? Will either of the Perron parents or any of the children have to pay the ultimate price in order to save the rest of the family? Those questions and more will be answered during the film’s runtime. Discover for yourself why the Warrens consider this particular paranormal investigation the scariest they ever dealt with.

I was born in Smithtown, New York, and grew up, worked, and lived in various areas of Long Island before moving to Boca Raton, Florida where I now make my home. In addition to being an aspiring writer, I am also an English teacher. I have a Bachelor of Arts in English and a Master’s Degree in Education, both from Adelphi University in Garden City, New York. In my spare time you will find me engrossed in books, watching movies, socializing with friends, or just staying active.
View all posts by robbinsrealm →
This entry was posted in Movies and tagged Carey Hayes, Chad Hayes, Ed Warren, Hayley McFarland, James Wan, Joey King, Joseph Bishara, Kyla Deaver, Lili Taylor, Lorraine Warren, Mackenzie Foy, Patrick Wilson, Ron Livingston, Shanley Caswell, The Conjuring, The Perron Family, Vera Farmiga. Bookmark the permalink.

3 Responses to “The Conjuring”