My friends and I had, had our fill of all of the mainstream horror bogeymen. It wasn’t that we didn’t still love seeing Freddy terrorize people’s dreams in the Nightmare on Elm Street series, watch Michael silently stalk his prey in Halloween and its sequels, or anticipate Leatherface revving up his chainsaw, we did, but we had reached a saturation point where we wanted something different. It was the early 90’s and collectively we were all a year or two away from getting our drivers’ licenses. On cold winter nights on Long Island, specifically East Norwich / Oyster Bay where I grew up, when we couldn’t hang outside, and no one was throwing a party thanks to their parents being out of town, movie rentals and pizza usually provided the entertainment.

One Friday evening, my father drove me to the local video store. I am not sure if Blockbuster was in business yet, but even if it was, it would be almost a decade before they put a branch in my town. As I made my way into the store, I immediately headed for the horror section. Not finding what I wanted, I asked the clerk if he could recommend something. He asked me what I was into – gore? slasher? monsters? I told him the sort of things my friends and I had been watching and that we wanted something very different. It didn’t take him long to hand me a VHS copy of a movie called “The Brood.” 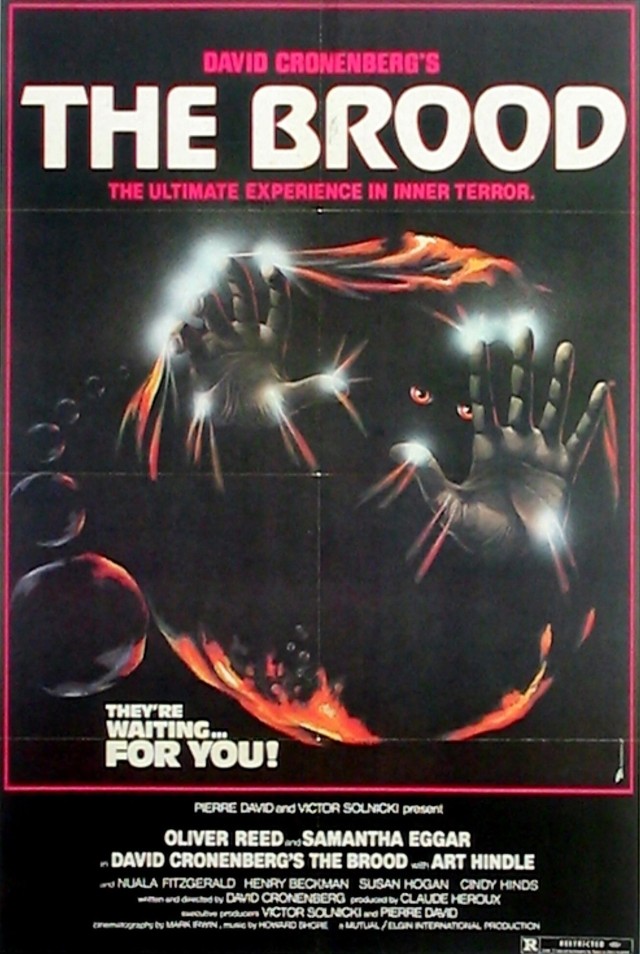 Prior to that evening I had never seen any of director David Cronenberg’s (Eastern Promises) films; after that night I actively sought his movies out. “The Brood,” which was written and directed by Cronenberg, premiered on May 25, 1979. The film’s 92 minute runtime is a mixture of the horror and Sci-Fi genres. (As an aside, Cronenberg considers “The Brood” his most autobiographical movie.  He wrote and directed it at a time when he was going through a bitter divorce and custody battle with his wife. The director has joked that “The Brood” was his version of Oscar winning director Robert Benton’s film “Kramer vs. Kramer,” which came out the same year and starred Academy Award winners Dustin Hoffman (Tootsie) and Meryl Streep (The Iron Lady), portraying a couple going through a contentious divorce. Cronenberg has also made mention in the past that, unlike his other films, there is not one line of humor to be found in the movie.)

The film opens at the Somafree Institute in Canada, which is run by Oliver Reed’s (Gladiator) character, psychologist, Dr. Hal Raglan. In addition to role playing, which sometimes becomes quite intense, Raglan has created a method for treating the mentally disturbed which he calls psychoplasmics. What the treatment attempts to do is have the patients turn their mental anguish into physical manifestations that can than be healed.

At the start of the movie it appears as if two actors are performing a play on a stage, but that is not the case. What is taking place, in front of an audience, is Dr. Raglan demonstrating the power of psychoplasmics. During a role playing session with a man named Mike (Gary McKeehan), who has serious father issues, Raglan is able to help the man work through his issues of low self-esteem and fear of making eye contact. The end result is that not only is Mike able to speak aloud and say what is bothering him while looking Raglan in the eyes, but his psychological pain takes shape on his body in the form of welts. 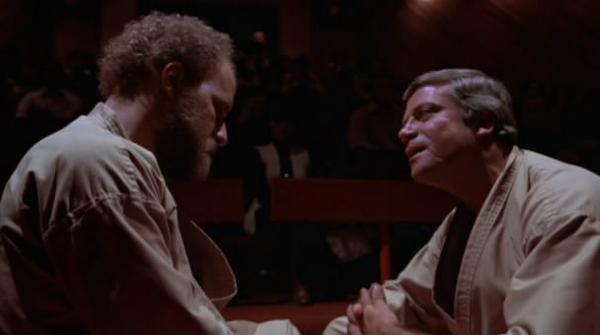 It is that sort of treatment which causes Frank Carveth (Art Hindle) to become deeply concerned when his daughter Candice (Cindy Hinds) returns with bruises on her body after visiting her mother at the institute. Nola, Frank’s estranged wife, one of the patients at Somafree is portrayed by Golden Globe winner and Oscar nominated actress, Samantha Eggar (The Collector). Nola’s reason for being there is never fully explained, but is hinted at through the characters of her parents: Her mother, Juliana, (Nuala Fitzgerald) suffered from psychological issues when she was younger. Making matters worse was that her father, Barton (Henry Beckman), a seemingly good natured person, divorced Nola’s mother because of her problems, and due to his alcohol addiction, was not a good role model for Nola when she was growing up. Barton leaving Nola also leads to her developing fear of abandonment issues. 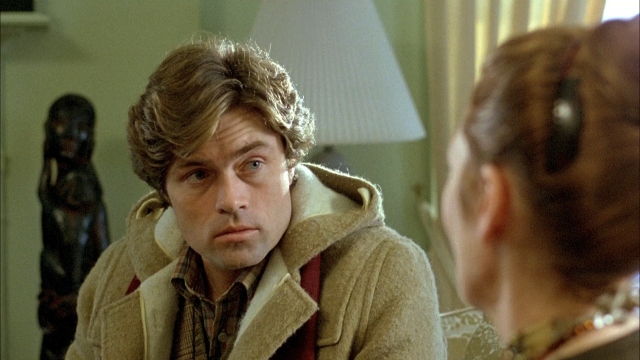 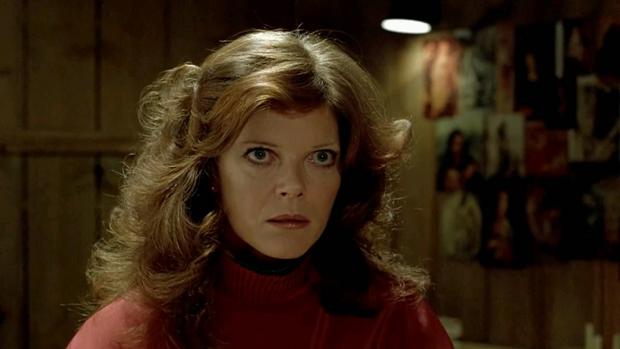 After discovering the bruising on his daughter’s body, Frank has a confrontation with Dr. Raglan, where he insists on seeing Nola, as well as demanding answers as to why his daughter has been harmed. He is rebuffed by the doctor in a cold and clinical manner. Raglan feels that Nola’s therapy is at a critical stage, and should not be disturbed by an aggravating presence such as Frank, because it would do more harm than good. Frank could care less and refuses to allow Nola to see Candice anymore. In addition, if he is not granted access to speak with his wife, he is going to do whatever it takes to expose Raglan and, what Frank feels are his questionable methods.

When Nola grows angry, death is visited upon those who have enraged her by facially deformed childlike creatures who will come to be known as ‘the brood.’ It is unknown where the creatures come from and who sends them to carry out their murderous tasks. The first killing the brood commits is of Nola’s mother, who is baby-sitting Candice while Frank tries to gather incriminating information on Raglan. Upon investigating some strange noises, Juliana finds her kitchen destroyed, and is then attacked by one of the creatures. She will be one of several people that are directly involved in the Carveth’s lives that the mysterious brood will murder. The more Frank digs into Raglan’s life and the goings on at the Somafree Institute, in order to keep his daughter safe and away from Nola, the more the brood appear to carry out rage filled killings. 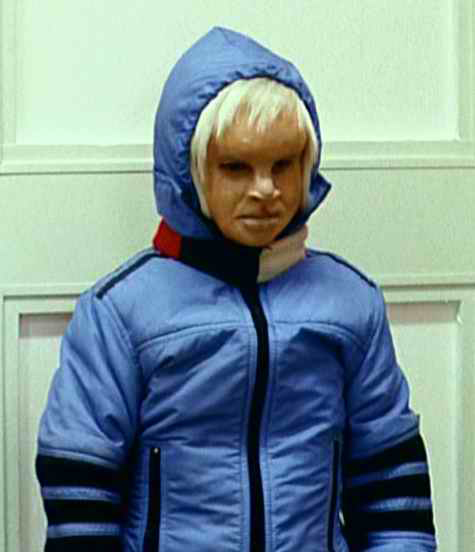 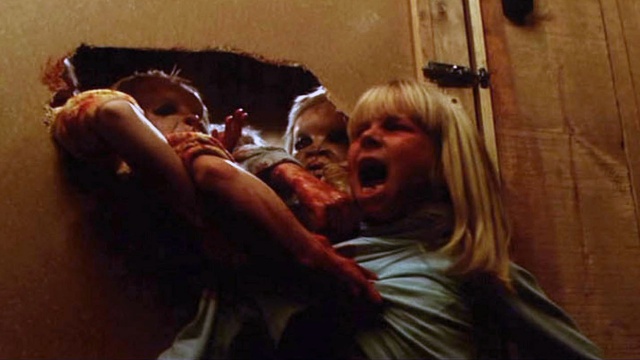 A word of caution for the squeamish, most of the film is devoid of gore, but there are a few scenes involving the brood, as well as something that Nola does toward the end of the movie, that are gory. Who are the brood? Where do they come from? Who is sending them out on their murderous missions? Does Frank Carveth succeed in shutting the Somafree Institute down and exposing Dr. Raglan for treating his patients through dangerous methods? Does Nola get the help she needs to overcome her psychological fears before she hurts her daughter again – or worse? What kind of lasting psychological impact will all of this have on Candice? 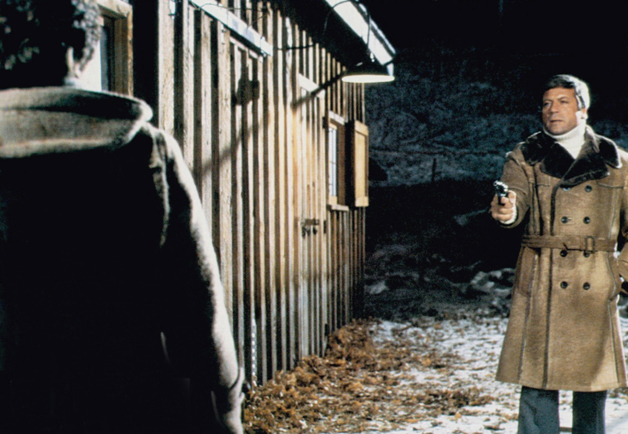 If you are  looking for a film in the horror genre with more of a psychological bent, which is as equally disturbing as it is thought provoking, “The Brood” delivers. The movie serves as a good introduction for those who are unfamiliar with Cronenberg’s films, and is a must for those fans of the director, who have not viewed some of his earlier works. 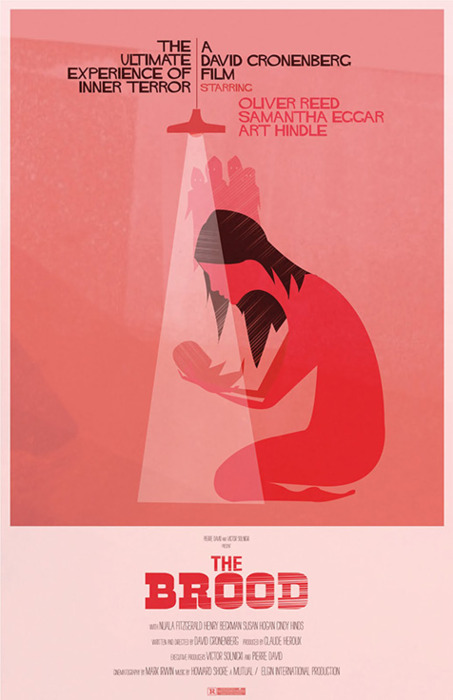 I was born in Smithtown, New York, and grew up, worked, and lived in various areas of Long Island before moving to Boca Raton, Florida where I now make my home. In addition to being an aspiring writer, I am also an English teacher. I have a Bachelor of Arts in English and a Master’s Degree in Education, both from Adelphi University in Garden City, New York. In my spare time you will find me engrossed in books, watching movies, socializing with friends, or just staying active.
View all posts by robbinsrealm →
This entry was posted in Movies and tagged Art Hindle, Cindy Hinds, David Cronenberg, Gary McKeehan, Henry Beckman, Nuala Fitzgerald, Oliver Reed, Samantha Eggar, The Brood. Bookmark the permalink.

16 Responses to “The Brood”