“Insidious: Chapter 2,” the follow up to the smash hit from 2010, simultaneously premiered on September 13, 2013, in four separate places around the globe: America, Canada, Ireland and the United Kingdom. Director James Wan (The Conjuring) returns to helm the second chapter in the story of the haunted Lambert family. Wan re-teams once again with Leigh Whannell (Saw), who co-wrote the first “Insidious” film with him, as well as created characters for “Insidious: Chapter 2” and co-wrote the story. The one-hundred and six minute film, which is a mixture of the horror and thriller genres, was made for an estimated budget of five million dollars, and as of the writing of this blog has gone on to gross a little over seventy-nine million dollars.

Beginning where the first film ended, the Lamberts have moved from their own home into the house of Josh’s mother Lorraine, Oscar nominated and Golden Globe winning actress, Barbara Hershey (A Killing in a Small Town). Things, however, are far from idyllic. The body of the patriarch, Josh Lambert, acquitted excellently by Patrick Wilson (Hard Candy), is possessed by the ghoulish ‘bride in black,’ who haunted his son in the first film. Making matters worse, the police suspect Josh for the murder of Elise (Lin Shaye), who unfortunately died at the end of the first movie while trying to help the Lamberts get their son Dalton (Ty Simpkins) back from a dark, haunted place known as ‘the further,’ where restless spirits wander. Although his wife Renai, portrayed by the convincing, Rose Byrne (X-Men: First Class), is putting on a united front with her husband in the presence of the authorities, it is clear that she is not entirely convinced of his innocence regarding the murder, and is anxiously awaiting the DNA results from cuts that were left on Elise’s neck.

Leaving Josh’s guilt or innocence aside, it doesn’t take long for the paranormal to start making its presence known in Lorraine’s home: Household items begin moving on their own; the piano starts playing minus a player; the radio turns on by itself; and a creepy woman, who has no business being seen by those who are still among the living, appears and acts out in a violent manner.

Unlike the first film, Josh’s behavior toward his family is much calmer. He is almost dismissive of what is taking place. When Josh’s family questions his well being, and when Rose points out that the entities from ‘the further’ are still bothering their family, Josh’s response is to tell her to merely ignore the ghosts and they will eventually go away. In private, things are another matter, as Josh struggles with the evil entity of a heinous individual by the name of Parker Crane, who is trying to take over Josh’s body for his own so he may live on. In order to do so, he must first kill all the remaining members of the Lambert family.

Paranormal investigators Specs, played by screenwriter Whannell and Tucker (Angus Sampson), both of whom appeared in the first film, return to help the Lamberts once more. This time, however, they utilize the help of a psychic named Carl (Steve Coulter). At the start of the film there is a prologue showing that in 1986, Carl was a friend and colleague of their boss, Elise. He was truly scared by what he had encountered while dealing with a then young Josh Lambert, so he called upon Elise to help him get rid of the evil entity that was haunting the boy. Later on in the film, Specs and Tucker will call on Carl to help them get to the bottom of the mystery as to why an evil entity of ‘the further’ simply will not let the poor Lambert family live in peace.

Will Parker Crane take full possession of Josh Lambert’s body and do the unthinkable by killing the family? Who exactly is Parker Crane? Where did he come from and why is he so evil? Will Carl be able to provide the Lambert’s with the closure they so desperately are seeking or will he fall victim to ‘the further’? Is Elise really gone or is she able to walk between two worlds just like the entities she investigated?

The film features a good cast, who don’t merely phone in their performances. This is coupled with interesting connections that tie aspects of the first film together with Chapter 2 in a satisfyingly coherent manner. The pacing helped hold my interest during the almost two hour runtime of the film. This far from subpar sequel has a good many things I haven’t even written about, as I don’t want to spoil the viewing pleasure of those of you who have not yet seen the follow up to the first Insidious. If you enjoyed the first movie, members of the cast, or Wan’s directing style, this sequel is definitely worth checking out. 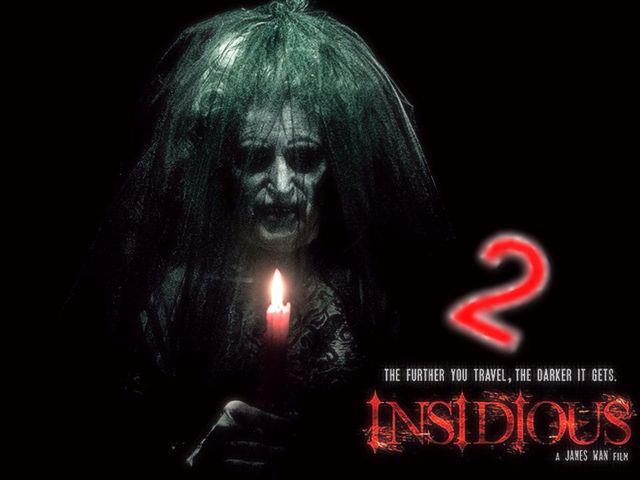 I was born in Smithtown, New York, and grew up, worked, and lived in various areas of Long Island before moving to Boca Raton, Florida where I now make my home. In addition to being an aspiring writer, I am also an English teacher. I have a Bachelor of Arts in English and a Master’s Degree in Education, both from Adelphi University in Garden City, New York. In my spare time you will find me engrossed in books, watching movies, socializing with friends, or just staying active.
View all posts by robbinsrealm →
This entry was posted in Movies and tagged Angus Sampson, Barbara Hershey, Insidious: Chapter 2, James Wan, Leigh Whannell, Lin Shaye, Patrick Wilson, Rose Byrne, Steve Coulter, Ty Simpkins. Bookmark the permalink.