“The Crate Segment of Romero and King’s Creepshow”

Several months ago, I had the pleasure of catching up with a good friend from my childhood – – someone with whom I grew up in Long Island, New York. He was in South Florida, in a neighboring town, visiting his grandmother. While his days were occupied spending time with her, which was the reason for his visit, his nights were free. His grandmother, he informed me, always had been, even when she was younger, the type of person who went to bed no later than 11:00 P.M. and got up no later than 5:00AM every day. After a couple of evenings of going out, on the Sunday evening, the second to last night he was going to be in Florida, my friend and I decided to stay in to watch a movie, order some pizza, and drink a few beers.

Thanks to today’s technological advances, we had a wide variety of films to choose from, even current movies, playing in the theater, which we could have ordered from on-demand. We opted, however, to take a nostalgic trip back to our childhood, and watch two films from that time period, the second of which was the George A. Romero (Dawn of the Dead), directed, “Creepshow.”

“Creepshow” was first screened at the Cannes Film Festival in France in May of 1982. The screenplay, written by prolific bestselling author, Stephen King (Doctor Sleep), is comprised of five diverse comic book stories, that are cinematically brought to life. King, actually stars in the second of the stories titled “The Lonesome Death of Jordy Verrill” The film is a genre mixing of comedy and horror. If you’ve watched the movie, you know what I am referring to. (As an aside, Stephen King’s son, who followed in his father’s footsteps, and writes under the name Joe Hill, has a small role in the prologue and epilogue of the film. He plays Billy, a child who is very much into horror, but whose father vastly disapproves of his reading of a comic book such as Creepshow).

I am only going to be writing specifically about one of the five vignettes, the fourth in the film titled “The Crate.” To begin with, I felt the music performed by John Harrison, for that particular segment, as well as the rest of the stories, for that matter, played a strong role in setting a good atmosphere. I also very much enjoyed how certain moments of action involving a character or creature were framed, as if Romero were filming the pages of an actual comic book. The cast, as a whole, features well known actors, including: Leslie Nielsen (The Naked Gun Films), E.G. Marshall (12 Angry Men), Ed Harris (Game Change), and Ted Danson (Cheers). “The Crate” segment stars Emmy winner and Oscar nominated actor, Hal Holbrook (Into the Wild), Adrienne Barbeau (Maude), and Fritz Weaver (The X-Files).

The opening of “The Crate” begins with a janitor, named Mike (Don Keefer), who is flipping a quarter up in the air. The act is fairly commonplace. I would imagine most, if not all of us, have done it at some point in our lives; even if it were to merely decide who goes first at something. The quarter rolls under a stairwell storage area, a place from the looks of it, that hasn’t been paid much attention to over the years. More importantly, however, is what Mike spots with his flashlight, while searching for his quarter. He shines the light upon a crate that has writing stamped on it. The writing consists of a date which reads June 1834, and that its contents were packaged and shipped to America, from an Arctic expedition.

Mike, completely surprised by his discovery, calls Weaver’s character, Professor Dexter Stanley of the Zoology department, who is attending an afternoon party. At first, the professor is seemingly unimpressed, telling Mike that it’s probably old issues of National Geographic or Reader’s Digest. It’s only when Mike informs Professor Stanley of the date on the crate, that he becomes intrigued enough to leave the party. He drives to Amberson Hall at the college where he teaches, to find out what is inside the crate. Also in attendance at the party are Holbrook and Barbeau’s characters of Henry and Wilma Northrup. Henry is a colleague and very close friend of Dexter. He also teaches at the college, in the English Department. Wilma has no job, except, it seems, to drink like a fish, talk crassly in a loud tone of voice, and belittle Henry at every opportunity. 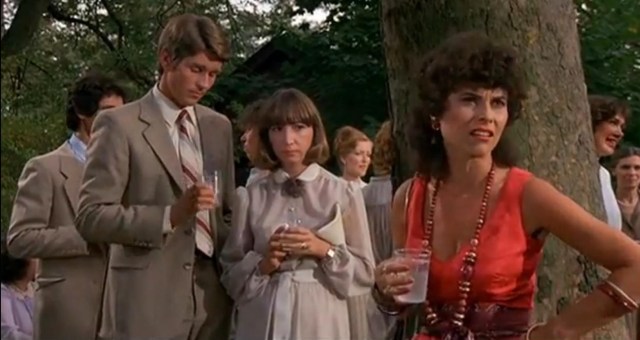 Arriving at the college, Mike and Professor Stanley move the crate into a nearby classroom, and with eager anticipation, begin to open it. No sooner does the lock get removed and enough nails get pulled out of the top of its cover, than Mike is attacked by a deadly creature. Dexter attempts to intervene and save Mike, but it is to no avail, whatever has been locked up for close to 150 years is simply too strong and too hungry. The creature winds up not only killing Mike, but dragging his body into its domain. (As an aside the creature used in the segment was designed by makeup master, Tom Savini, who did all of the makeup work throughout the entire film. He also has a cameo appearance, as a garbage man, toward the end of the movie. Romero called the creature ‘fluffy,’ while filming was in progress.) 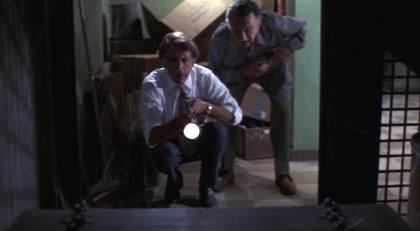 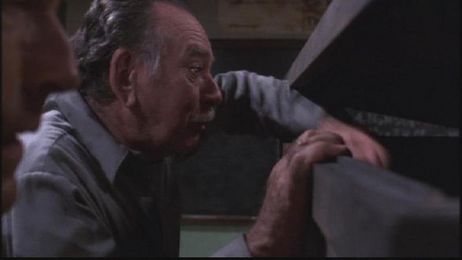 In a state of sheer panic, Dexter flees the classroom. Running up the stairs and into the hallway. Walking toward him, is the only other person on campus, a student, Charlie Gereson (Robert Harper), who he tries to stop from going downstairs. Dexter relays his tale of terror to Charlie, who foolishly doesn’t believe him, and sets out to investigate. He receives the same treatment as Mike the janitor, although to his credit, he helps Dexter escape the creature’s grasp.

Dexter, sweating profusely and appearing as if he is on the verge of a nervous breakdown, arrives at Henry’s home; fortunately, Wilma is not there. He explains what has transpired to his friend, while they consume some alcoholic beverages, the last of which, Henry drugs with sleeping pills. While they were talking, Henry has been formulating a plan, one that is shared with the viewer a short time later. The plan if successful, will get rid of not only the creature in the crate, but his awful wife as well. Does Henry’s plan succeed or does he become another victim of the monster in the crate? 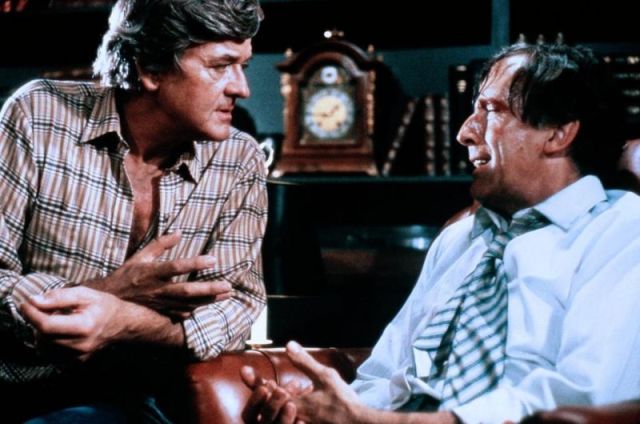 Why did I choose this particular segment to discuss, as opposed to the other four – – simple – – it is my favorite of the film. I actually would have preferred if Romero had decided to end the film after the segment, instead of including the fifth and final tale “They’re Creeping Up On You,” which I’ve truly never liked because I am no fan of the insect world, especially the kind of bug that, that story features. The original plan was that if “They’re Creeping Up On You,” became too difficult to film, it would be replaced with the Stephen King story “The Hitch-Hiker,” which wound up being used in the sequel to “Creepshow.” The other reason I chose that particular one, is that even after all these years, “The Crate” segment still has the ability to give me a bit of a haunting jolt.

I was born in Smithtown, New York, and grew up, worked, and lived in various areas of Long Island before moving to Boca Raton, Florida where I now make my home. In addition to being an aspiring writer, I am also an English teacher. I have a Bachelor of Arts in English and a Master’s Degree in Education, both from Adelphi University in Garden City, New York. In my spare time you will find me engrossed in books, watching movies, socializing with friends, or just staying active.
View all posts by robbinsrealm →
This entry was posted in Movies and tagged Adrienne Barbeau, Creepshow, Don Keefer, E.G. Marshall, Fritz Weaver, George A. Romero, Hal Holbrook, Joe Hill, Leslie Nielsen, Robert Harper, Stephen King, Ted Danson, The Crate, The Hitch-Hiker, The Lonesome Death of Jordy Verrill, They're Creeping Up On You, Tom Savini. Bookmark the permalink.