“Professor Ellis Fowler, a gentle, bookish guide to the young, who is about to discover that life still has certain surprises, and that the campus of the Rock Springs School for Boys lies on a direct path to another institution, commonly referred to as the Twilight Zone.”

Those words spoken by “Twilight Zone” creator, Rod Serling, who also wrote this season three episode, titled “The Changing of the Guard,” offers the viewer a bit of insight as to what is to come. I had initially planned for this blog to be in the same posting with the episode, “The Trade-Ins,” but felt that the blog would have been way too long for one posting if it contained both episodes. Directed by Robert Ellis Miller (Reuben, Reuben), the episode originally aired on June 1, 1962. As with many episodes of the “Twilight Zone” there is an essential question being asked at its core. In this instance that question is – what would someone who loved their profession, if not more than, than equal to anything else in their life, do if suddenly they were forced out of their line of work?

Facing what he feels is an incomprehensible dilemma, is Professor Ellis Fowler, portrayed in a very effective manner by Emmy nominated and BAFTA winner, Donald Pleasence (The Great Escape). The viewer learns that Professor Fowler has been teaching literature at the Rock Spring School For Boys in Vermont for the past fifty-one years. The episode begins on the last afternoon of the semester, three days before Christmas. After Pleasence’s character is finished teaching class, he gives his student’s a holiday present by informing them that they have all passed. 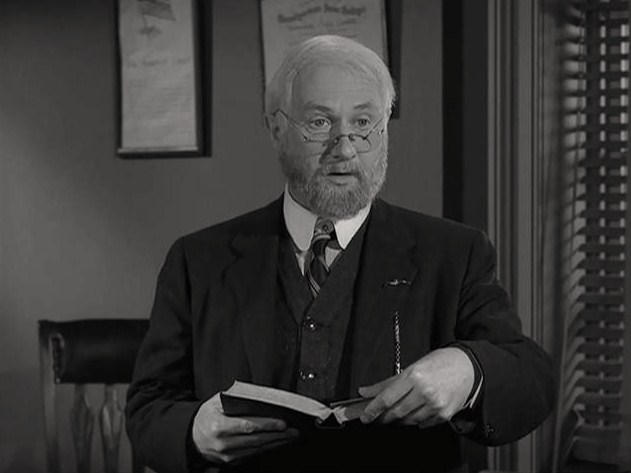 In route to exiting the building, the professor is stopped by the Headmaster of the school (Liam Sullivan), and asked to step into his office. He is wondering why Professor Fowler has not responded to the letter sent to him by the Board of Trustees of the school. Fowler admits to being behind on his mail, but that his answer is yes. The yes, he believes he is giving to the Headmaster, is that he will return to teach the following year. The school, apparently, only has their educators sign contracts for one year of teaching at a time. What the professor fails to realize, until he truly listens to what the Headmaster has to say, is that he has not received a letter asking him if he is going to return, but a termination letter. According to the Headmaster, new, younger men, with fresh ideas, need to be brought in to replace someone like Professor Fowler. The fact that the Headmaster informs the Professor that he will still make half salary for the remainder of his life, does nothing to quell the gut wrenching news he has just received.

Upon his arrival home, he sits and listens to Handel’s Messiah, on the radio. His housekeeper, Mrs. Landers (Philippa Bevans), comes in to inform the professor that dinner is ready. He tells her he’s not hungry; afterward, he proceeds to do a critique of himself that is rife with self-loathing and conjecture that his life as a teacher has been a failure. Fowler specifically feels that in all his years of teaching, he never once moved or motivated any of his students, and that particular poems, sayings and quotations, that he held in high regard, were forgotten as soon as his students left his classroom. Mrs. Landers, is moved to tears. In an attempt to assuage her, he tells her that he thinks he will go take a nap, but instead of heading to bed, he leaves the house, with a gun that he pulled out from his desk drawer. As Mrs. Landers looks out the wide open front door to Fowler’s home, she sees only the snow and darkness of the night.

Trivia buffs take note: This was the last episode of “The Twilight Zone” where the ending shot rose upward to reveal a starlit sky. The presence of the Horace Mann statue in the episode was important to Rod Serling. Mann was the first president of his alma matter, Antioch college, and the quote on the statue was Antioch’s motto. The episode marked the first American television appearance that actor Donald Pleasance ever made.

He makes his way to a statue of educator, Horace Mann. The professor reads the quote on the statue “Be ashamed to die until you have won some victory for humanity.” Lifting the gun up to his head, about to go through with his suicidal plans, he is granted a last minute reprieve. The ringing of the school bells, indicating class is in session, is what keeps him from pulling the trigger. Making his way to his classroom, he encounters a room full of students, however, these aren’t the same group of boys from the beginning of the episode. The room is populated with ghosts from the professor’s past, reaching all the way back to his first days as an educator. Can their presence, and what they convey to him, make enough of an impact, or will Professor Fowler wind up taking his life, because nothing can compensate for no longer being able to do what he loves most in the world?

I was born in Smithtown, New York, and grew up, worked, and lived in various areas of Long Island before moving to Boca Raton, Florida where I now make my home. In addition to being an aspiring writer, I am also an English teacher. I have a Bachelor of Arts in English and a Master’s Degree in Education, both from Adelphi University in Garden City, New York. In my spare time you will find me engrossed in books, watching movies, socializing with friends, or just staying active.
View all posts by robbinsrealm →
This entry was posted in The Twilight Zone, TV Series and tagged Donald Pleasence, Horace Mann, Liam Sullivan, Philippa Bevans, Robert Ellis Miller, Rod Serling, The Changing of the Guard, The Twilight Zone. Bookmark the permalink.