“Twilight Zone’s – ‘The Masks’ – What Is Inside Comes Out”

Posted on October 3, 2014 by robbinsrealm

“Mr. Jason Foster, a tired ancient who on this particular Mardi Gras evening will leave the Earth. But before departing, he has some things to do, some services to perform, some debts to pay – and some justice to mete out. This is New Orleans, Mardi Gras time. It is also the Twilight Zone.”

The opening narration is spoken by “Twilight Zone” creator and Emmy and Golden Globe winner, Rod Serling, who also wrote the season five episode titled “The Masks.” Originally airing on March 20, 1964, the information Serling gives hints at what the show entails without giving anything away to the viewer. The very well written and competently acted episode was directed by Emmy nominee, Ida Lupino (Mr. Adams and Eve). (As an aside, “The Masks” was the only episode of the “Twilight Zone” to be directed by a woman).

Jason Foster (Robert Keith) is a man who has accumulated a great deal of wealth during his lifetime, but no amount of money can keep death from claiming him. Informed by Dr. Thorne (Willis Bouchey) that he can go at anytime, Foster needs just a few more hours of life to conduct one final deal. The transaction involves his heirs, the Harper family: daughter, Emily (Virginia Gregg); son-in-law, Wilfred (Milton Selzer); and grandchildren, Paula (Brooke Hayward) and Wilfred Jr. (Alan Sues).

The family, which the viewer will soon learn is comprised of four deplorable people, is invited to a Mardi Gras party Foster is throwing just for them. He lets them know, at the time, that his death is imminent. Foster is aware that they could not care less about him, and that as soon as he is dead, they will begin grabbing things of value off his shelves. What the old man is saying is met with several disingenuous protestations that he is wrong regarding how they feel about him. However, their collective interest is genuine, when he lets the family know that his will has been written, and that everything he owns has been left to the four of them, on one condition. The condition is that each family member wear a special mask that he has personally picked out for them, until midnight that evening.

Not one of the Harper family members is keen on the idea, but anyone who doesn’t wear their mask, Foster lets it be known, will only receive train fare home to Boston. Upon hearing the consequences of failing to agree to the stipulation, Wilfred immediately changes his tune, talking about how, after all, they are just masks and it is only for a few hours.

These aren’t ordinary masks, however, that Foster has ordered from a costume shop. The masks have been created, to hear Foster put it, by an old Cajun. Each one represents character traits that Foster informs his family are the antithesis of each of their true natures. Furthermore, the masks are only worn during Mardi Gras time. As he hands the individual masks to each member of the family, he explains what the mask represents, and sarcastically points out how their negative meanings are the opposite of each of the Harpers. 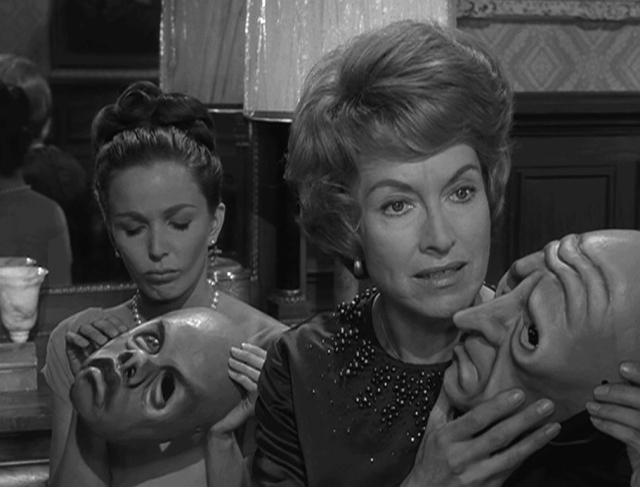 After each of the Harpers are given their masks, Wilfred asks Jason what mask he has chosen for himself. Picking up a mask of a skeletal face, Foster replies

“Oh, this is mine. The face of death, because I am alive, understand? I shall wear the thing that stalks me at this moment.”

As the evening wears on, the Harpers grow increasingly uncomfortable wearing their masks, to the point where they are begging the old man to let them remove them. In a despondent tone of voice, Foster asks the collective family if they have anything else to say to him before he dies? None of them respond, so with the last bit of life left in Foster’s body, he goes off on a verbal tirade that lets each of the Harpers know exactly how he feels about them.

Do the dying man’s final words invoke any kind of genuine emotional response? What will happen at midnight? Are the masks actually doing something to the members of the Harper family? Did Foster merely have them wear them because he knew it would cause them to be unhappy? All of those questions will be answered at the conclusion of the twenty-five minute runtime of one of the most iconic episodes of the series; featuring a jarring ending, that for those who see it for the first time, will not soon forget.

I was born in Smithtown, New York, and grew up, worked, and lived in various areas of Long Island before moving to Boca Raton, Florida where I now make my home. In addition to being an aspiring writer, I am also an English teacher. I have a Bachelor of Arts in English and a Master’s Degree in Education, both from Adelphi University in Garden City, New York. In my spare time you will find me engrossed in books, watching movies, socializing with friends, or just staying active.
View all posts by robbinsrealm →
This entry was posted in The Twilight Zone, TV Series and tagged ALan Sues, Brooke Hayward, Ida Lupino, Milton Selzer, Robert Keith, Rod Serling, The Masks, The Twilight Zone, Virginia Gregg, Willis Bouchey. Bookmark the permalink.