Dressed in a traditional black chador, an alluring female vampire walks and skateboards the streets of the fictional Iranian town called ‘Bad City’. A great number of its unsavory residents have already met an unpleasant end, as evidenced by the ravine full of bodies that is shown at the start of the movie. “A Girl Walks Home Alone At Night,” is the well executed, debut film from director and writer, Ana Lily Amirpour. The visually striking movie, which is spoken in Farsi with English subtitles, was shot in black and white. The most refreshing aspect of its 101 minute runtime, is that it offers the viewer a twist on the traditional vampire lore. (As an aside: The filming for the fictional Bad City was shot in Taft, California).

The vampire, portrayed by Sheila Vand (Argo), speaks little throughout the film, and is listed only as ‘The Girl’ in the credits. Her actions in the movie, which is part horror, romance and thriller, can be likened to that of the character of Dexter Morgan in “Dexter.” Like all vampires, her need to feed is necessary, but she only feeds off men who are truly bad. In one scene, involving a male child (Milad Eghbali), she demonstrates restraint. Instead of killing an easy prey, she warns the adolescent boy, that if he is not good from that day forward, she will do something terrible to him as punishment. 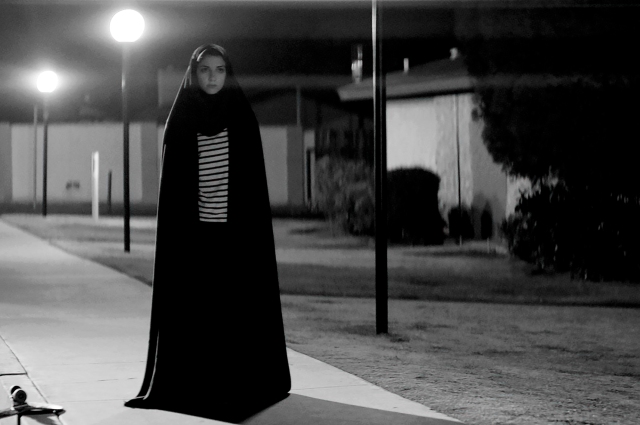 Her world, at least at the start of the film, is a lonely one. Her only companion seems to be the music she listens to. Throughout the course of the film, unlike, for example, the HBO series “True Blood,” there is no background information imparted to the viewer about ‘The Girl,’ explaining how she came to be a vampire, or for that matter, how long she has lived as one. ‘The Girl’ also doesn’t seek the refuge of a coffin, opting instead to sleep during the daylight hours in her bed inside her house; the walls of which are covered with posters. (As an aside: Not only is the the word vampire never spoken once during the film, but upon its release, the movie made cinematic history by becoming the first vampire themed film to be set in the Middle East).

At the beginning of the movie, the viewer is introduced to Arash (Arash Marandi). The character is dealing with problems of both a financial and personal nature. He wants more out of life; not only to leave where he lives, but to improve his current station, that of working as a gardener. His pride and joy is a vintage automobile. A car that has been taken from him by the sleazy, misogynistic, drug dealing, pimp, Saeed (Dominic Rains). Even though Arash doesn’t owe him any money, the car is used toward the mounting payments owed by his widower father, Hossein (Marshall Manesh), a heroin addict. The only time the father leaves the house, is when he has enough money to pay to spend some time with Atti, who is a prostitute (Mozhan Marno). Atti is someone who ‘The Girl’ looks out for, which is demonstrated during several scenes in the film.

One evening, while coming home from a costume party that he went to dressed as Dracula, Arash encounters ‘The Girl’. High on ecstasy, he doesn’t get any sense that she could be dangerous. He begins to make small talk with her. After letting her know he is lost, and asking her where he is, it turns out, he finds, much to his disbelief, that he is still in ‘Bad City’. He tells her he is Dracula, but that she shouldn’t worry because he won’t hurt her. When he touches her hand, he remarks how cold she is, but again taking no fear in that, as others might, he wraps his cape around her. The lack of dread in his actions toward her, and his attempt at conversation, disarms her. Not only does Arash come back to her place, (she helps him by wheeling him on her skateboard) but he lives to tell about it. ‘The Girl’ has taken a liking to him, and the two alienated, lonely individuals, begin a subtle romance. In the scene where she takes Arash back to her place, it ends with her tilting his head up, exposing his neck. Instead of biting him, however, she rests her head on his chest, as she listens to the sound of his heartbeat, while music plays in the background.

To write more about what transpires during the film, would be a disservice to those of you who have not seen it. This is the sort of movie, where the less that is known the better. The film is shaped and added to by its eclectic soundtrack, which helps to move the story along. The cast is very effective and the imagery captured by cinematographer Lyle Vincent stays with the viewer long after the film’s conclusion. Let me state that this film is definitely not going to be for everyone. The movie is slow moving, and those seeking a visceral visual experience, for the most part, are going to be disappointed. The vampire nature of ‘The Girl’ is used sparingly. There is only one instance where things get graphic. As of the writing of this blog, the film is currently available for instant streaming on Netflix. 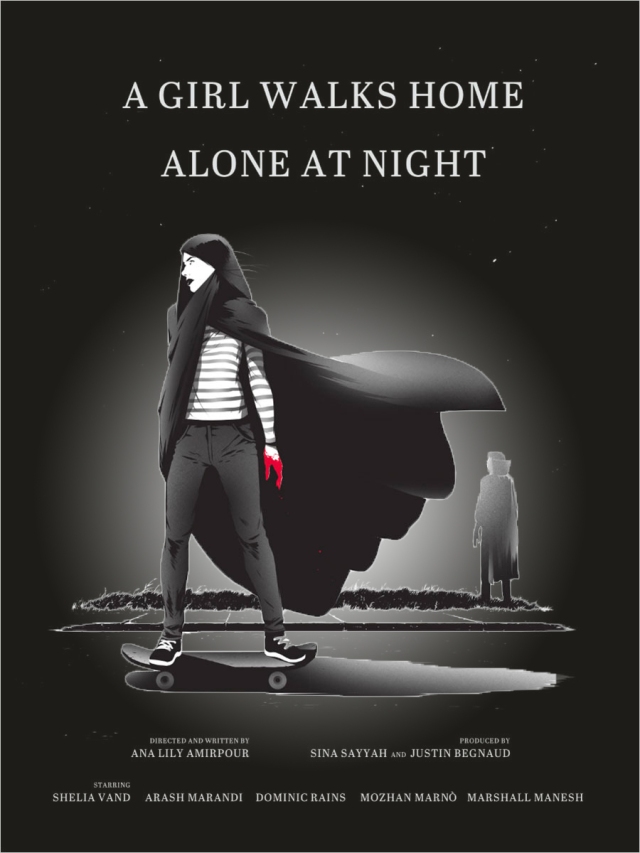 I was born in Smithtown, New York, and grew up, worked, and lived in various areas of Long Island before moving to Boca Raton, Florida where I now make my home. In addition to being an aspiring writer, I am also an English teacher. I have a Bachelor of Arts in English and a Master’s Degree in Education, both from Adelphi University in Garden City, New York. In my spare time you will find me engrossed in books, watching movies, socializing with friends, or just staying active.
View all posts by robbinsrealm →
This entry was posted in Movies and tagged A Girl Walks Home Alone At Night, Ana Lily Amirpour, Arash Marandi, Bad City, Dominic Rains, Lyle Vincent, Marshall Manesh, Milad Eghbali, Mozhan Marno, Sheila Vand. Bookmark the permalink.

23 Responses to “A Girl Walks Home Alone At Night”