“A Most Violent Year”

1981 is a year in which, statistically, the crime in New York City, was at its apex in regard to murder, rape, and other violent felonies. Abel Morales is an engrossing character portrayed by Golden Globe nominee, Oscar Isaac (Ex-Machina). He is a first generation immigrant and upwardly mobile businessman, who owns and operates the Standard Heating Oil company, a business which he took over from his father-in-law. Abel is not interested in taking criminal shortcuts to achieve his piece of the American dream. He is attempting to do everything by the book; that combined with his work ethic, ingenuity, and excellent business acumen, should be enough to reach his goals, but they are not. While Abel wants to play by the rules, numerous individuals around him are looking to thwart his efforts, and doing what they can in order to put him out of business. 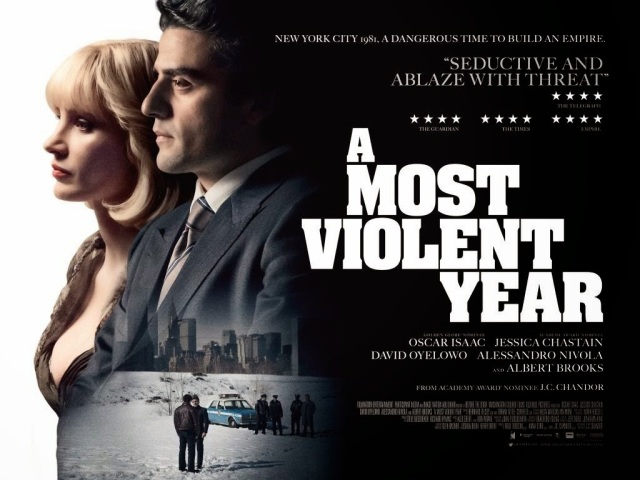 “A Most Violent Year,” written and directed by Oscar nominee J.C. Chandor (Margin Call), is a compelling, well acted, suspenseful, character driven film. Helping to enhance the movie throughout is the cinematography of Bradford Young (Selma) and the score from Golden Globe winning composer, Alex Ebert (All Is Lost).

At the start of the film, Abel and his attorney, Andrew Walsh played by Oscar nominee Albret Brooks (Drive) are meeting with a group of Hasidic Jewish business men, led by Joseph Mendelsohn (Jerry Adler), whose property Abel is interested in purchasing. If he can acquire the land by the waterfront, a piece of property that both he and his competitors desire, it could help to expand Abel’s business to a whole other level. The catch is, that even though a sizable down payment has been made, the owners of the land inform Abel that if he can’t come up with the rest of the money in one month’s time, the deal is off. Abel will not only lose the rights to buy the land, but he will forfeit the down payment as well. The major gamble Abel has undertaken sets the stage for the remainder of the movie, which originally premiered on November 6, 2014 at the AFI Festival.

During the film’s 125 minute runtime, Abel navigates through one conflict after another, in order to attempt to meet the deadline. His drivers, who, per Abel’s orders, are unarmed, leave themselves vulnerable to thieves. A number of Abel’s trucks, which each contain $6,000 worth of oil, have been high jacked and siphoned. The latest incident involves one of his young drivers, Julian (Elyes Gabel), who looks up to Abel, and wants to advance himself in the business by leaving driving and moving into sales. Julian, who thinks he is stopping the truck because a car in front of him has stalled, is a victim of a high jacking that is shown on screen; not only is the truck taken by two criminals, but they also beat him up. This latest incident prompts a visit from the truckers’ union representative, Bill O’Leary (Peter Gerety), who tries to get across to Abel the necessity of his men being armed. Abel is hesitant to do anything of the sort because he needs to secure the necessary bank loan in order to meet his obligation on the property by month’s end. It might not matter what Abel wants. Julian, who is allowed time to recuperate from his injuries, has been traumatized by the event, and ignores Abel’s edict about no guns. When he returns to work, he is armed and ready to defend himself if the same scenario should occur.

In addition, to the stealing of his trucks, another source of contention for Abel, is the yearlong investigation of his company that is culminating in indictments. The probe into his business was launched by the reputation-conscious and politically ambitious, District Attorney, Lawrence played by Golden Globe nominee David Oyelowo (Selma). Oyelowo’s character is investigating Abel’s business, as well as the entire city’s oil heating industry, for improprieties when it comes to business practices that are both corrupt and fraudulent.

In the role of Abel’s wife, the obstinate, Brooklyn born Anna, who is the daughter of a gangster, is Golden Globe winner Jessica Chastain (Zero Dark Thirty). While She loves Abel, she doesn’t hold to his above board way of doing business. The following are two examples, which differentiate how she and Abel conduct themselves: In one instance, Anna keeps the books for Standard Heating Oil, but what Abel doesn’t know, until long after the fact, is that she keeps two sets of books. In the second illustration, while driving home from a business dinner, Abel accidentally hits a deer with his car. After removing a tire iron from the trunk of the car, he struggles with the thought of killing the deer, even though it will put it out of its misery. After allowing Abel the opportunity to kill the animal, Anna takes a gun from her purse and fires several bullets into the deer without a second’s hesitation.

Anna is also not beneath getting on Abel’s case, when she feels he is not being tough enough when it comes to doing what is right not only for his business, but for their family. Her concerns are not without some merit. Soon after the couple move into their new home, their dog alerts them that something is not right. Abel gets up to investigate, and when he steps outside, he is attacked by a man. Abel, who is barefoot, does his best to chase the would-be-trespasser through the snow, but it is to no avail. After informing Anna of what happened, and that he is sure it was nothing more than a thief who figured their new house was an easy mark, he thinks that is the end of it. The next day, however, one of their young daughters is standing in front of the house holding a loaded gun she found in the snow. If not for Anna arriving home and taking the weapon away from the child, something terrible might have happened. Once Abel is told, his thinking switches from that of someone who feels his house was the target of a thief, to the mindset that one of his rivals is trying to get him to back down by threatening his family, or worse.

Will Abel abandon his principles and start fighting back on the same level as those who wish to ruin his business? Do the actions of his competitors keep him from meeting his deadline to the owners of the property, thereby costing him everything? Will Abel learn which one of his competitors is stealing from his company? Will it not matter what his business rivals do to him, thanks to the actions of the district attorney’s office? Does Anna’s fixing the books at the company lead to the downfall of the business? The answers to those questions and more will be seen through to their conclusion by the end of the film, which is parts action, crime, drama and thriller.

For those looking for a movie along the lines of “Goodfellas,” this is not the film for you. There is actually very little in the way of violence in a movie, the title of which contains the word violent. Chandor took the plot for the type of organized crime movie that has been filmed many times before. A movie in which the central figure is shown dealing with their loved ones, as well as their enemies, as they go about rising to the top of whatever underworld they are a part of. In “A Most Violent Year,” however, the main character isn’t trying to advance by criminal means, but instead by taking the opposite path. For those seeking a fresh approach to the genre this should be an enjoyable watch.

I was born in Smithtown, New York, and grew up, worked, and lived in various areas of Long Island before moving to Boca Raton, Florida where I now make my home. In addition to being an aspiring writer, I am also an English teacher. I have a Bachelor of Arts in English and a Master’s Degree in Education, both from Adelphi University in Garden City, New York. In my spare time you will find me engrossed in books, watching movies, socializing with friends, or just staying active.
View all posts by robbinsrealm →
This entry was posted in Movies and tagged A Most Violent Year, Albret Brooks, Alex Ebert, Bradford Young, David Oyelowo, Elyes Gabel, J.C. Chandor, Jerry Adler, Jessica Chastain, Oscar Isaac, Peter Gerety. Bookmark the permalink.

23 Responses to “A Most Violent Year”