Posted on October 7, 2015 by robbinsrealm

Kirk: “If we weren’t missing two officers and the third one dead, I’d say someone was playing an elaborate trick or treat on us.”

“Catspaw,” the seventh episode of the second season of the original “Star Trek,” was the first one produced for the season, but was not aired until October 27, 1967, so that it would air closer to Halloween. Directed by Joseph Pevney, who in addition to directing episodes for other popular television shows such as “The Alfred Hitchcock Hour,” “Bonanza,” and “The Hardy Boys/Nancy Drew Mysteries,” directed fourteen of the original “Star Trek” series episodes. “Catspaw” was written by Robert Bloch, who is most famous for being the author of the novel “Psycho.” (As an aside: Bloch wrote two other episodes for the original series: “Wolf in the Fold” and “What Are Little Girls Made Of.” In addition, in an early version of the script for “Catspaw” Bloch killed off the character of Mr. Sulu.)

The following are Bloch’s own words regarding the episode:

“I do have some quibbles about the way in which things were done. It wasn’t their fault, but they just didn’t have the budget. Catspaw cried out for the use of opticals in post-production effects. Shooting a cat’s face in tight close-up is not exactly any substitute for having a giant cat. Running down a few feet of cardboard corridors isn’t the same thing as having your characters trapped in a labyrinth of frightening proportions.”

Captain Kirk (William Shatner) is concerned because Mr. Sulu (George Takei) and Mr. Scott (James Doohan) are thirty minutes late in checking in with ‘The Enterprise.’ Mr. Spock (Leonard Nimoy) has informed Kirk there were no life form readings on the planet prior to the landing crew’s arrival. Kirk is dismissive of the fact, even if Sulu and Scott have nothing of interest to report, they’re both familiar with landing party procedures, and should have already contacted the ship. Crewman Jackson (Jay D. Jones) contacts ‘The Enterprise’ and asks to  beam up. When his body materializes in the transporter room, he collapses. Doctor McCoy (DeForest Kelley) pronounces him dead. A disembodied voice begins emanating from Jackson, with a warning to Captain Kirk that a curse has been put on the ship; if it doesn’t leave everyone on board will die.

Kirk, Spock, and McCoy beam down to the planet, Pyris VII, to the exact location Jackson beamed up from. The surface of the planet is foggy, a condition which ‘The Enterprise’s’ probe data didn’t indicate. Spock takes tricorder readings which inform him that there are no cloud formations, nor has there been a change in temperature, and there are no bodies of water on the planet’s surface. He states to the captain, that his readings make the atmosphere of fog highly unlikely. With phasers drawn, the three proceed to search for Sulu and Scott. Within seconds, Spock picks up life form readings. Kirk contacts ‘The Enterprise’ to find out what the ship’s instruments are reading; as far as Ensign Chekov (Walter Koenig) can discern, he is only registering the life forms of the new landing party. Afterward, the ship and landing party lose contact with one another. (As an aside: This was the first episode filmed with Chekov, even though he had already appeared in the iconic Trek episode “Amok Time” which was aired on September 15, 1967).

Kirk, Spock, and McCoy, soon come upon three witches who again warn Kirk to leave. This is followed by gusting, howling winds, and McCoy spotting a castle in the nearby distance. When the landing party enter the castle, they encounter a black cat that has a crystal around its collar; the cat seems none too pleased that they are there, and runs off. Kirk mentions the term ‘Trick or Treat’ and McCoy uses the word ‘Halloween.’ The door to the dust and cobweb covered castle closes. In the interim, ‘The Enterprise’ has been left in command of Assistant Chief Engineer, DeSalle (Michael Barrier). He is trying to have communications officer, Lieutenant Uhura (Nichelle Nichols), re-establish contact with the landing party. 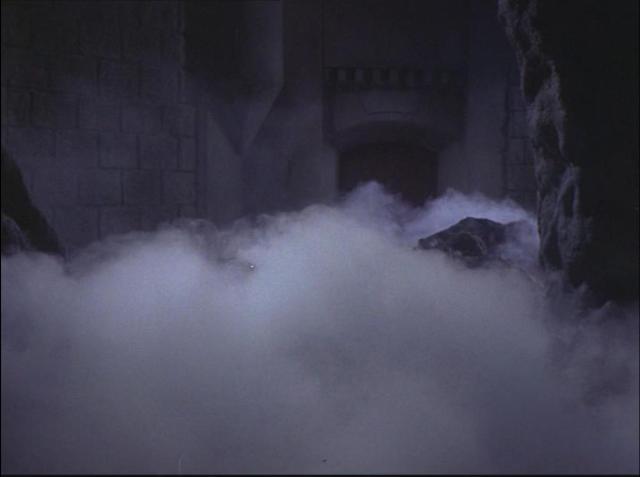 After only a few moments of Kirk, Spock, and McCoy walking down a corridor, the floor gives way underneath them. When they wake up, the three are chained to the walls of a dungeon, a skeleton hangs next to McCoy. Kirk thinks they are rescued, when Sulu and Scott arrive; Scott is holding a phaser and Sulu has a ring of keys. He is mistaken, because the two men remain mute, and act as if they are being controlled by someone or something.

While being led out of the room, Kirk begins an attack, but no sooner does the skirmish start, than all five men are gone. Taken from the dungeon, they reappear in a throne room, where they are told to stop fighting by Korob (Theodore Marcuse). He is dressed in a manner befitting a wizard. He holds something in his hand which appears to be, and acts like, a wand, and speaks to the black cat from earlier in the episode. The captain inquires, among other things, as to why they brought him and his crew to the planet. Korob replies that his questions are not important, and that they were warned to stay away. He does, however, let the landing party know, that he is not native to the planet. Korob offers them food, and with a wave of his wand can produce anything the landing party might desire, for example, jewels. He shows them this power in an attempt to bribe them to leave the planet. Kirk dismisses the grandiose gesture, letting Korob know he could have the same jewelry produced by the replicator on ‘The Enterprise.’ Korob is pleased with Kirk’s answers and refusal to stay away, because everything the landing party had gone through, up until that point, according to Korob, has been a test.

Korob is not alone. After the cat leaves the room, a dark haired, woman named Sylvia (Antoinette Bower) appears; she is wearing the same crystal that was shown hanging from the cat’s collar. She reveals to Kirk, that her powers include not only knowing what a man is thinking, but also being able to control his actions. A short lived scuffle ensues, during which Kirk is able to take the phaser from Mr. Scott. With Kirk refusing to relinquish the weapon, Sylvia reveals another of her powers. She holds on a chain, a model of ‘The Enterprise’, which she places over the flame of a candle. When Kirk is allowed to contact the ship, he learns that ‘The Enterprise’ is growing hot. Having no apparent recourse left to him, other than to risk his ship and crew, Kirk lets go of the phaser, and reluctantly agrees to go along with Korob and Sylvia’s plans. (As an aside: The model of ‘The Enterprise’ used in the episode was donated by “Star Trek” creator, Gene Roddenberry, to the Smithsonian National Air and Space Museum).

Where have Korob and Sylvia come from? What is their purpose for being on the planet? How do members of ‘The Enterprise’ crew fit into their agenda? How do Kirk, Spock, and McCoy attempt to escape from Korob and Sylvia? Suffice it to say, that while most of those questions and more will be answered by the end of the episode, not everything is fully explained in a satisfactory way.

This change of pace episode of the original “Star Trek” series was written and aired in time for Halloween. I can’t blame the producers for taking a chance on this sort of themed show. Unlike the beloved and financially successful franchise it is today, back then, “Star Trek” was struggling to find an audience, so sometimes decisions were made in the interest of bringing in more viewers. The effects, due to budgetary constraints, were done on the cheap, and it would be unfair to compare them to anything that can be done with today’s technology. Overall, with the exception of Jackson’s death, which adds a bit of a somber tone to “Catspaw,” for the most part, especially the Halloween aspects of the episode, are just plain cheesy fun; nothing to take seriously.

I was born in Smithtown, New York, and grew up, worked, and lived in various areas of Long Island before moving to Boca Raton, Florida where I now make my home. In addition to being an aspiring writer, I am also an English teacher. I have a Bachelor of Arts in English and a Master’s Degree in Education, both from Adelphi University in Garden City, New York. In my spare time you will find me engrossed in books, watching movies, socializing with friends, or just staying active.
View all posts by robbinsrealm →
This entry was posted in TV Series and tagged Antoinette Bower, Catspaw, DeForest Kelley, George Takei, James Doohan, Jay D. Jones, Joseph Pevney, Michael Barrier, Nichelle Nichols, Robert Bloch, Star Trek, The Enterprise, Theodore Marcuse, Walter Koenig, William Shatner. Bookmark the permalink.