“Tales from the Crypt: From Comic Books to Television”

On April 22, 1954, in New York City, William M. Gaines, publisher of Entertaining Comics, testified before the U.S. Senate Subcommittee on juvenile delinquency, which was chaired by Tennessee Senator, Estes Kefauver. Gaines asked for, and was granted, permission to testify in front of the committee. The following words contain the statement he gave:

“I was the first publisher in these United States to publish horror comics. I am responsible. I started them. Some may not like them, that is a matter of personal taste. It would be just as difficult to explain the harmless thrill of a horror story to a Dr. Wertham, as it would be to explain the sublimity of love to a frigid old maid. What are we afraid of? Are we afraid of our own children? Do we forget that they are citizens too, and entitled to the essential freedom to read. Or do we think our children so evil, so vicious, so simple minded, that it takes but a comic magazine story of murder to set them to murder of robbery; to set them to robbery?”

The Dr. Wertham, who Gaines mentions in his statement, was a German-American psychiatrist. He was the catalyst behind bringing about the formation of the Senate, sub-committee. The book “Seduction of the Innocent,” which he co-authored with Max Allan Collins, was published in 1954. The book was a scathing indictment on what they perceived to be the destructive influence comic books had on children; Wertham had been waging his anti-comic book propaganda campaign since 1948.

The story of how “Tales From The Crypt” and EC’s other comic book lines came into existence, however, starts in 1934. A one-shot called “Famous Funnies: A Carnival of Comics,” was a thirty-six page comic book, put out by Dell Publishing. William’s father, Max, and Harry I. Wildenberg, who was a sales manager, collaborated with Dell on the venture. That comic book is considered by pop-culture historians to be the first true American comic book. In 1938, after a successful working relationship with Dell, Max Gaines left and teamed up with “Superman” publisher, Harry Donenfeld; together they launched a new publication called “All-American Comics.” The comic line featured superheroes, such as, The Green Lantern, as well as the first popular female superhero, Wonder Woman. By 1945, Gaines sold his share in the company for half a million dollars, which would equate to over six and half million dollars in today’s economy.

When Gaines left “All-American Comics,” he formed “Educational Comics,” which released titles such as “Picture Stories From The Bible.” The success he had known from his previous endeavors eluded him, thanks to poor sales. Sensing he needed to do something, before he was in financial ruin, he changed the name from “Educational Comics” to “Entertaining Comics” or as most people who are familiar with it refer to it as “EC” The name change, however, didn’t help to elevate sales. Unfortunately, Max Gaines, didn’t have the requisite time to turn the fledgling company around. He died in a boating accident in 1947.

Max’s son William, who was twenty-five years of age at the time of his father’s passing, wanted nothing to do with comics. From all accounts, William’s relationship with his father was a contentious one. Max would often make remarks to the effect, that he felt William would never amount to anything. William’s mother, Jessie, eventually convinced him to take over the business. After agreeing to do so, William, over time, changed the sort of content that EC published, and began to move toward publishing things he was interested in.

1947 marked the beginning of a working relationship between William Gaines and Al Feldstein, who was initially hired by Gaines to be a freelance artist, but would, after a short duration of time, become an editor. Part of the reason, was his involvement with the work he did on “The Crypt of Terror,” and “The Vault of Horror,” the publications of which immediately improved sales, and also prompted Gaines to stop publishing the rest of the titles his company owned, which hadn’t been selling. (As an aside: “The Crypt of Terror” only published three issues before the name was changed to “Tales from the Crypt.”) 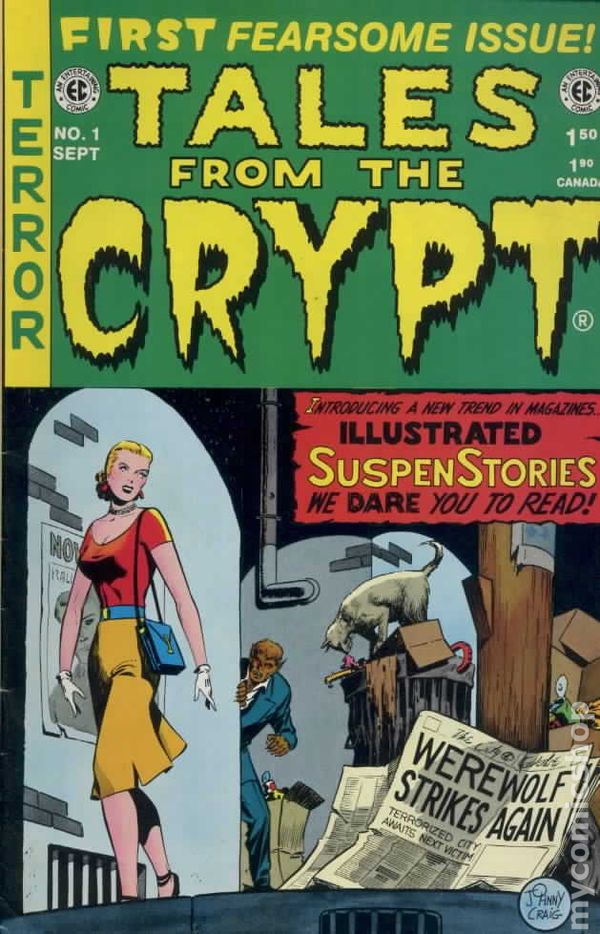 The early stories from all of the comic offerings featured standard scares, such as haunted houses, witches, and vampires, and would contain four stories each. As the work progressed, the stories began pitting good versus evil, which would always end on an ironic twist, that more often than not, resulted in death. In order to make it less scary for their younger readers, the comics had three hosts, The Crypt Keeper, The Vault Keeper, and The Old Witch, who would introduce the stories and comment in a humorous way. In January of 1950, EC began publishing two other comics: “The Haunt of Fear” and “Crime Suspense Stories.” 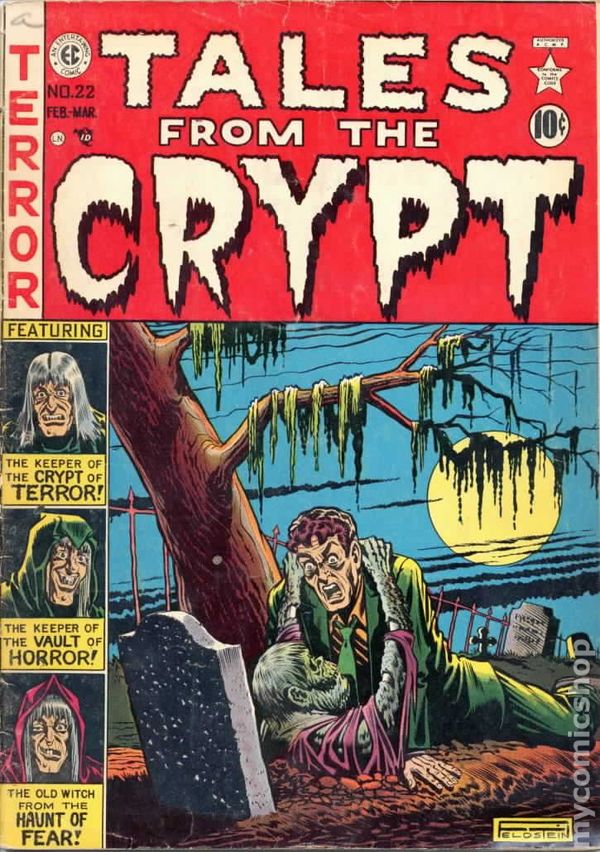 In order to produce such a large amount of work, Gaines garnered inspiration from everything he read and watched, which led to the writing of two stories that raised the ire of famed author, Ray Bradbury (Fahrenheit 451). Bradbury, wrote a letter to EC comics asking for his royalties; instead of accusing EC of plagiarism, he states in the letter that they forgot to pay him for his work. The incident led to a mutually beneficial relationship, and EC would wind up adapting twenty-six of Bradbury’s short stories into comics.

In addition to horror, Gaines published comics that dealt with his other interests, science-fiction and fantasy, with the release of the comic books “Weird Science” and “Weird Fantasy.” While those titles would never reach the level of sales of the horror themed comics, they are considered by a great number of comic book historians to be classics. I would be remiss, if I didn’t mention that in August of 1952, Gaines along with editor, Harvey Kurtzman, published the first issue of the immensely popular, satirical, “Mad Magazine.” Gaines would remain its publisher until he passed away in 1992. (As an aside: Wanting to cash in on the profits EC was generating from their sales, other publishers began putting out their own horror comic books, such as: “Chamber of Chills,” “Out of the Shadows,” and “Startling Terror.” The stories those comics offered focused more on gore and lacked the level of moralistic story telling EC offered its readers. By 1953, almost a quarter of all comic books sold dealt with horror).

In 1954, the Comics Magazine Association of America was formed as a result of the findings by the U.S. Senate Subcommittee on juvenile delinquency. The CMAA was run by Judge Charles Murphy; his official title was Code Administrator. In the code for editorial matter, words such as crime, horror, terror, and weird were banned from being used. The code also didn’t allow any stories which contained excessive bloodshed, gore or gruesome crimes being depicted, or any type of horror stories. In order to publish a comic book, a company would have to receive the association’s seal of approval. Governed by those stipulations, a dozen publishers were immediately put out of business. Gaines tried to publish EC without becoming a member of the CMAA, but eventually joined for the sake of his company and employees. On September 14, 1954, Gaines made the announcement that he was discontinuing his line of horror and crime comics. The last story in the last comic book EC ever published, was in “Incredible Science Fiction” and was called “Judgment Day.” The story was an allegory about racial tension, where a space investigator arrives on a planet that is run by orange and blue robots, in order to see if the planet can join the galactic empire. The investigator soon learns that one group of robots discriminates against the other because of their color. In the end, the investigator determines that the planet is not worthy to join the empire. Alone on his ship, the investigator removes his space helmet, and he turns out to be a black man.

The 50 minute documentary, “Tales from the Crypt: From Comic Books to Screen” was directed by Chip Selby (Reasonable Doubt). Selby credits his grandmother with his discovering his love for EC. In 1971, when he was nine years old, Selby’s grandmother took him with her to the library. While he was looking for something to read, he came across the book “Horror Comics of the 1950’s,” which was published by Nostalgia Press. Selby was intrigued by the cover, which showed a man locked inside a mausoleum, with a reanimated corpse rising out of a coffin. He opened the book, and has been a fan of the comics ever since.

The version of the documentary I saw was included with my “Tales from the Crypt” complete first season DVD set. Although, I haven’t seen it, there is a version of the documentary, which was released as its own two disc set that includes a director’s cut, that is six minutes longer, and numerous special features as well. Comic book historians, Mark Evanier and Jerry Weist; “Goosebumps” author R.L. Stine, who states that the comics had a profound effect on him pursuing the career that he did; directors John Carpenter (Halloween) and George Romero (Dawn of the Dead); William Gaines daughter, Wendy Gaines Bucci, EC Editor and artist; Al Feldstein, as well as others, provide commentary throughout. In the interest of full disclosure, the documentary only discusses the HBO anthology television series, which took its plots directly from the comic books for a few minutes. The commentary is mainly by executive producer, Joel Silver. Debuting on June 10, 1989, the series lasted seven seasons for a total of 93 episode before ending in July of 1996. I found this to be a very interesting and informative documentary.

I was born in Smithtown, New York, and grew up, worked, and lived in various areas of Long Island before moving to Boca Raton, Florida where I now make my home. In addition to being an aspiring writer, I am also an English teacher. I have a Bachelor of Arts in English and a Master’s Degree in Education, both from Adelphi University in Garden City, New York. In my spare time you will find me engrossed in books, watching movies, socializing with friends, or just staying active.
View all posts by robbinsrealm →
This entry was posted in TV Series and tagged Al Feldstein, Chip Selby, Crime Suspense Stories, Dr. Wertham, EC, Entertaining Comics, George Romero, Harry Donenfeld, Harry I. Wildenberg, Harvey Kurtzman, Horror Comics of the 1950's, Incredible Science Fiction, Jerry Weist, Joel Silver, John Carpenter, Judge Charles Murphy, Mad Magazine, Mark Evanier, Max Gaines, R.L. Stine, Ray Bradbury, Tales From The Crypt, Tales from the Crypt: From Comic Books to Television, The Crypt Keeper, The Crypt of Terror, The Haunt of Fear, The Old Witch, The Vault Keeper, The Vault of Horror, Weird Fantasy, Weird Science, Wendy Gaines Bucci, William M. Gaines. Bookmark the permalink.

9 Responses to “Tales from the Crypt: From Comic Books to Television”