The tales begin with writer and director, David Parker’s (Master’s Of Horror) “Sweet Tooth.” During the opener, the viewer is treated to an urban legend, that has been passed down to children on Halloween night, after they’ve returned home from trick-or-treating. While Lizzie (Madison Iseman) is babysitting Mikey (Daniel DiMaggio), her boyfriend (Austin Falk) takes it upon himself to scare the young child. As Austin watches Mikey gorging himself on every piece of candy he’s collected that evening, he warns the boy that he better save some for ‘Sweet Tooth.’ The puzzled Mikey asks who that is, and that is when Austin relates the story, as the scene dissolves into a flashback. 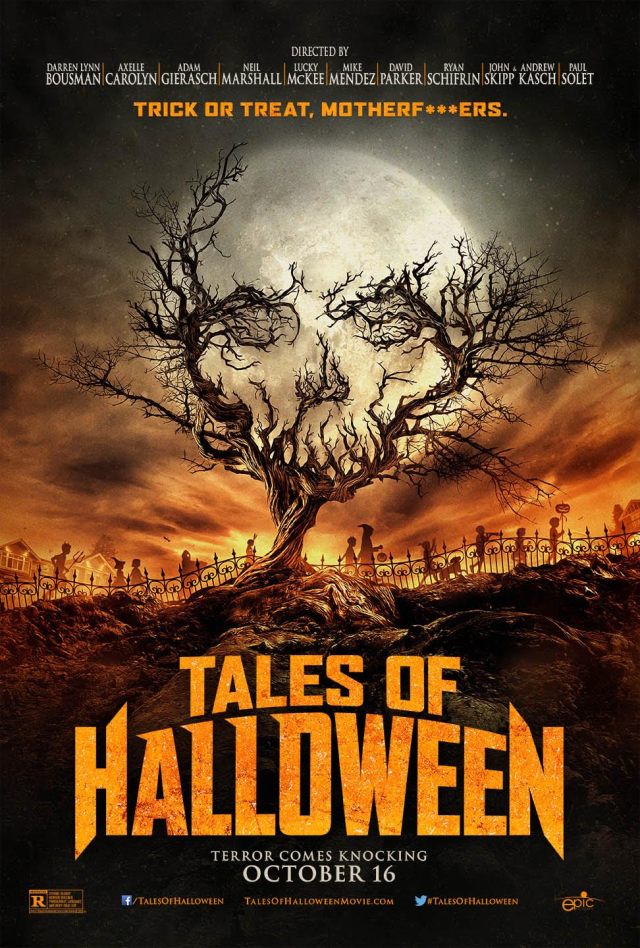 Fifty years earlier, a child named Timmy Blake (Cameron Easton) loved every aspect of Halloween. He loved to get dressed up in a costume and go out trick-or-treating. The one thing he disliked was returning home. At this point, Mikey interrupts Austin to ask why, stating that, that is the best part. Not for Timmy, as it turned out. Austin explains to Mikey, that Timmy’s parents would take his candy haul from him and send him to bed, without another word. One night, curious to know what happened with all the candy, Timmy left his room, and snuck downstairs. The sight that greeted his eyes, was of his parents eating all of the candy, while also making love. Something within Timmy snapped at that very moment, and he kills his parents, afterward, he proceeds to eat every last bit of candy.

A scared Mikey pockets a piece of candy, which he take to his room. After Lizzie leaves to go back down stairs, Mikey creeps out of bed, and places an unwrapped candy bar on the floor. Lizzie gets on Austin for scaring Mikey, but it doesn’t last long, as the two proceed to eat all of the remaining candy. Feeling on the verge of being nauseous, Lizzie leaves the room to get some medicine. While she’s gone, Austin’s eyes are closed, and he hears the words ‘Trick-or-Treat.’ At first, he doesn’t think much of it, but he is in a for a rude awakening, because when he opens his eyes, he learns, that ‘Sweet Tooth’ is much more than the product of legend. Running back into the room, thinking Austin is sick, Lizzie discovers he’s been killed, and she begins to scream. ‘Sweet Tooth’ runs after her, and off camera, makes short work of her, before coming up the stairs to Mikey’s bedroom. Rather than show the full creature walk into the room, his razor sharp fingernails scoop up the candy bar Mikey has left for him, and the door closes without incident.

Shifting backward to the daylight hour, the second of the ten tales, directed by Darren Lynn Bousman (Saw II) and written by Clint Sears is called “The Night Billy Raised Hell.” Billy (Marcus Eckert) is dressed like the devil, with a rubber, red faced mask, replete with goatee and horns; red cape and tights complete his costume. He is being chaperoned by his older sister, Britney (Natalie Castillo), and her boyfriend, Todd (Ben Stillwell), even though he seems to be the only child who is out trick or treating so early in the day.

After Todd threatens Billy that he is going to tell everyone that he peed his pants if he doesn’t egg a house, the young child reluctantly agrees. Walking up to the door, just as he is about to throw the egg, it opens, and what can only be a seemingly costumed gentleman, steps outside and takes the egg from Billy. In the interim, seeing that the door was opening, Britney and Todd began running away. The man who took the egg from Billy, with perfect aim, throws it at Todd’s back, knocking him down onto the street. An apologetic Billy, doesn’t get to talk his way out of the situation, as he is dragged inside the man’s home.

Billy’s captor, who appears to be the devil incarnate, is portrayed by Golden Globe winner, Barry Bostwick (Spin City). Once inside the house, he informs Billy, that tonight, he is going to learn what a real Halloween prank is all about. Bostwick’s character isn’t kidding; the mayhem he and his new protégé get up to include, but is not limited to, setting things on fire, robbing a convenience store at gunpoint, stealing a car, and defacing property. At the end of the evening will Billy be able to return to his life as a normal child who must follow the rules? Was everything he had done that Halloween night the product of a dream? Is there another twist in store for the young protagonist? I won’t spoil it for those of you who would like to see the film.

The 92 minute, horror anthology movie, features ten tales directed by eleven people; the segment “This Means War” was co-directed. The film premiered in Canada on July 24, 2015 at the Fantasia International Film Festival. I am not going to do a segment breakdown of every tale because I have no desire to spoil the movie for those of you who want to watch it. Suffice it to say, that the tales run the gamut from the cleverly done, “Trick,” in which a group of adults, become the target of children who are determined to do them in, to the silly and gory “Friday the 31st.”

Throughout the movie, the viewer is treated to stories involving: a vengeful ghost – a supernatural revenge tale; a modern day twist on the fairy tale of “Hansel and Gretel” – a pair of kidnappers that get way more than they bargained for; dueling neighbors, one who appreciates an old school approach to horror, while the other likes to be more overt; as well as a killer pumpkin, which brings everything to a close. There are notable cameos throughout, including amongst others: Lin Shaye (Insidious); Emmy winner, John Landis (An American Werewolf in London); Greg Grunberg (Heroes); Joe Dante (The Howling); and Golden Globe nominee, Adrienne Barbeau (Maude), who does voice over narration as a DJ.

“Tales of Halloween” as a whole is an entertaining way to pass an hour and a half, especially for those of you who like horror anthology films. Like most anthology movies, not every tale delivers to its full potential, and some segments are much better than others in terms of story and entertainment value. The good thing for those segments a viewer dislikes, is that each one has a short runtime, so if one doesn’t work for you, it doesn’t take long before a new tale is being presented. While gory imagery and terrible scenarios play out throughout different parts of the film’s duration, the overall tone comes off as a more dark comedic offering than horrific. Viewers who are looking for a scare a minute thrill ride might want to keep that in mind.

I was born in Smithtown, New York, and grew up, worked, and lived in various areas of Long Island before moving to Boca Raton, Florida where I now make my home. In addition to being an aspiring writer, I am also an English teacher. I have a Bachelor of Arts in English and a Master’s Degree in Education, both from Adelphi University in Garden City, New York. In my spare time you will find me engrossed in books, watching movies, socializing with friends, or just staying active.
View all posts by robbinsrealm →
This entry was posted in Movies and tagged Adrienne Barbeau, Austin Falk, Barry Bostwick, Ben Stillwell, Cameron Easton, Clint Sears, Daniel DiMaggio, Darren Lynn Bousman, David Parker, Fantasia International Film Festival, Greg Grunberg, Joe Dante, John Landis, Lin Shaye, Madison Iseman, Marcus Eckert, Natalie Castillo, Tales of Halloween, The Night Billy Raised Hell. Bookmark the permalink.

8 Responses to “Tales of Halloween – Goofy, Gory, and Gruesome Entertainment”