Posted on February 5, 2016 by robbinsrealm

“Star Wars: Episode VII – The Force Awakens” begins in the same manner as the six films that have preceded it in the series, with the opening line, “A long time ago in a galaxy far, far away….” followed by a written narrative bringing viewers up to the present state of the Star Wars universe. Luke Skywalker (Mark Hamill) has gone into hiding, and although the rebels who fought so hard to establish the Republic by wresting power from the Galactic Empire did achieve those ends, thirty years hence, evil has been re-born with the emergence of the First Order. Led by Supreme Leader Snoke – a character voiced by BAFTA nominee, Andy Serkis (Dawn of the Planet of the Apes) – whose ultimate desire is to crush the resistance fighters of the Republic, and once again establish galactic tyranny in the form of a new Empire. Aiding Snoke in his efforts are: General Hux, played by Domhnall Gleeson (Brooklyn); “Game of Thrones” Gwendoline Christie who portrays Captain Phasma; and most importantly, the main antagonist of the film, three time Emmy nominee, Adam Driver’s (Girls) character, Kylo Ren. The masked, darkly attired warrior, Ren, in whom the force is exceptionally strong, carries a red, crossguard lightsaber, and like his predecessor, Darth Vader, speaks in a foreboding voice. Kylo Ren is consumed with inner confliction, which leads to manifestations of intense rage when he loses his temper. While carrying out the mission of the First Order, he is equally driven to hunt down Luke Skywalker, the last of the Jedi, and his former master. Backing up the aforementioned is an army of subordinates, and a seemingly countless number of stormtroopers, one of whom, BAFTA nominee, John Boyega (Attack the Block) has suffered a crisis of conscience and wants to flee the First Order.

At the start of the film, resistance fighter, and skilled pilot, Poe Dameron, played by Golden Globe winner, Oscar Isaac (Show Me a Hero), is meeting on the planet of Jakku with Lor San Tekka, who is portrayed by two time Oscar nominee, Max von Sydow (Dreamscape). The purpose of their meeting is for Dameron to get a map showing the location of Luke Skywalker. Lor San Tekka expresses his feelings to Dameron, that without the Jedi in the universe there can be no balance. Their conversation is cut short, with the arrival of the First Order. Poe attempts to flee Jakku, but his X-wing ship is destroyed; knowing that he is in imminent danger, and the dire consequences that could arise if the First Order gets the map, he gives it to his droid BB-8. Poe instructs the orange and white, spherical shaped droid, to get as far away from their location as possible. A short time later, while attempting to save Lor San Tekka’s life, Poe is taken into custody. During the melee, while the stormtroppers are killing the villagers of Jakku, Boyega’s character, known at the start as FN-2187, later to be re-named Finn, decides he can’t pull the trigger of his blaster, and kill innocent people. (As an aside: Not only is Boyega’s character arc, that of a stormtrooper who has rebelled against what he has been trained to do since he was a little boy, one of the most interesting of the new film, but Finn in general, is a very likable addition to the franchise, and someone who offers some well-timed comic relief). 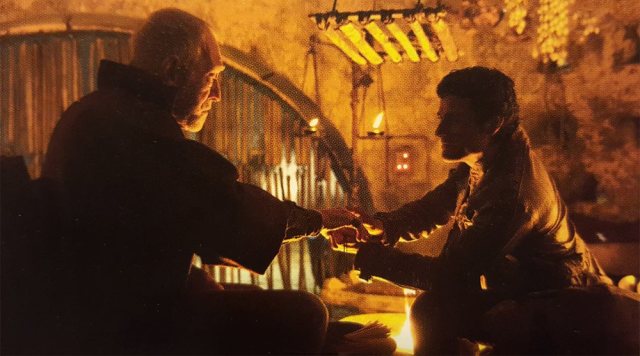 The Force Awakens’ main female protagonist Rey, played by Daisy Ridley (Scrawl), is a compelling new character to the Star Wars universe. She is a scrap-metal scavenger who lives a lonely existence on Jakku, as she waits for the return of her family who left her there when she was a young child. Rey is a confident and resilient person, who is quick thinking, a capable fighter, and as will be demonstrated to the viewer, while flying the iconic Millennium Falcon, an excellent pilot. Additionally, she is shown to the viewer to be powerful with the force. For those of you who have not yet seen the film, I will let you learn for yourself why I make that statement. Through a chance encounter, Rey rescues BB-8 from a fellow desert scavenger, Teedo (Kiran Shah), who has ensnared the droid in a net. While almost trading him to Unkar Platt, an alien character voiced by Simon Pegg (Shaun of the Dead), for a heaping amount of food, she changes her mind, and keeps the droid.

Not long after Rey decides she won’t part with BB-8, Finn enters her life. After helping Poe to escape the First Order, in a stolen TIE Fighter, their ship is hit by gunfire and hurtles back down to the planet of Jakku. While Finn survives the crash, miraculously unharmed, all he finds of Poe Dameron is his jacket. Trudging his way on foot through the brutally hot, barren desert, he eventually spots a village. Desperately needing water, which no kind hearted citizen wants to give him, he resorts to sticking his face in a trough that a large creature is drinking from. After being knocked away by the being, Finn is spotted by BB-8, whose series of beeps alerts Rey to the fact that Finn is wearing his former owner’s jacket. Not pausing to ask questions, with her staff weapon in hand, she goes into attack mode, and chases Finn through the village, eventually knocking him down, but decides to give him a chance to tell her, and BB-8, who he is, and what he is all about. It doesn’t take long for the First Order to arrive back on Jakku, in pursuit of their rogue stormtrooper, and that is where things for both Finn and Rey begin to become life changing.

One of the most welcomed aspects of the film was the return of familiar characters. Oscar nominee, Harrison Ford (Witness) reprises his role as Han Solo, who is considerably older, but no less captivating. The mighty Wookie, Chewbacca (Peter Mayhew), as always, is by his side. BAFTA nominee, Carrie Fisher (Soapdish) – who I couldn’t recall seeing in anything other than a “Sex and the City” episode from 2000 – is back as Princess Leia Organa, who prefers to be referred to as General Organa. She is once again determined to do what she must in order to thwart evil. Also in the movie is Mark Hamill, reprising his role as Luke Skywalker, the last of the Jedi, who, well, I can’t really say why he’s in the movie. I don’t want to ruin it for those of you who haven’t watched the film yet. Additionally, Anthony Daniels returns as C-3PO. The usually, all gold-plated robot, has been given a bit of color to his exterior this time round. C-3PO’s wisecracking sidekick, R2-D2 does appear in the film, but is given minimal screentime. The same goes for Admiral Ackbar (Tim Rose / Erik Bauersfeld) and Nien Nunb (Mike Quinn / Kipsang Rotich). Oscar winner, Lupita Nyong’o (12 Years a Slave), voices the character of kind-hearted, alien, Maz Kanata, who can look into the eyes of people and see what they are truly made of. Her presence helps to advance the narrative when Rey discovers she has been holding on to an important object. Furthermore, Greg Grunberg (Heroes), Warwick Davis (Willow), and Ken Leung (Lost), also appear briefly.

The film was directed by Emmy winner J.J. Abrams (Star Trek Into Darkness), who co-wrote the screenplay with BAFTA winner and four time Oscar nominee, Lawrence Kasdan (Raiders of the Lost Ark), and Oscar winner, Michael Arndt (Little Miss Sunshine). The film premiered on December 14, 2015 in Los Angeles, California. The movie which has a runtime of 135 minutes, is comprised of the action, adventure, fantasy, and Sci-Fi genres. Returning to compose a new score, while also incorporating music that has grown to iconic status over the years, since the original trilogy, is five time Oscar winner, John Williams (Schindler’s List). Overall, “Star Wars: Episode VII – The Force Awakens” is a visually dazzling film that brings a new energy to the franchise that was never fully present in the prequels. While J.J. Abrams respects and pays homage by including aspects of Star Wars mythos that worked well in the past, he delivers on rebooting the franchise in a positive way, and gives the fan base the film they’ve been craving since 1999.