“You want to read about somebody exceptional. You want to get the reader’s attention. You want to tell a story that’s never been told, and to do that, you have to jazz it up a bit. Baseball is a game of endless statistics, and it was great fun messing around with some of those numbers.”

The engaging, and at times moving, novel “Calico Joe” written by best-selling author, John Grisham (A Time to Kill), was published by Doubleday on April 10, 2012.  America’s pastime of baseball, while an integral part of the novel, is not Grisham’s sole focus. Instead, he uses the sport to craft a story about the relationship, or lack thereof, between a father and son. Additionally, Grisham writes about the restorative power of forgiveness, and the redemption that can accompany forgiveness, if an individual is willing to make amends to the person they have wronged. 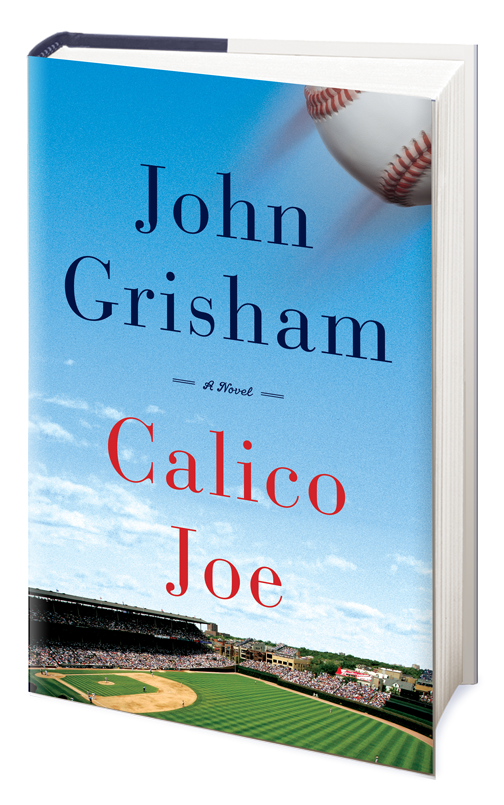 In the summer of 1973, The Chicago Cubs baseball team has been hit with two consecutive injuries to players, which necessitates them calling up one of their promising minor leaguers. Playing on Chicago’s AA ball club in Midland, Texas, is Joe Castle, a twenty-one year old from Calico Rock, Arkansas. His life is about to be altered by getting an opportunity to play professional baseball in the big  leagues. When Joe starts playing, he excels at a pace never before been seen by fans, fellow players, and the media, and in the process begins to imprint his name into the record books. During his meteoric rise, Joe becomes a hero not only to Chicago Cub fans in the windy city, but to children and adults alike, throughout America, who have an unyielding passion for the game.

Eleven year old Paul Tracey, not only loves to play baseball, but constructs scrap books of his favorite players, and rookie sensation Castle is the subject of one of those books. Paul’s father is fictional New York Mets pitcher, Warren Tracey; a journeyman, who has not achieved the greatness he has strived for throughout his career. When not on the mound, Warren drinks heavily, and is never one to turn down a party. At the start of the book, a now forty-one year old Paul, receives a phone call from his father’s wife, that the man is dying of pancreatic cancer, and only has a few months to live. The news about Warren – who in addition to his other vices, was a verbally, and sometimes physically, abusive husband and father, to Paul, and to his mother and sister – doesn’t illicit much sympathy. Warren’s impending passing, however, causes Paul to begin to formulate a plan of action in his mind.

The story, which is narrated from Paul’s perspective alternates between 2003 and the summer of 1973. During a summer showdown at Shea Stadium (the former home of the New York Mets), the National League is still very much up for grabs. Paul and his mother attend the game to watch Warren pitch. Paul has great confliction, wanting Joe Castle to hit a homerun, but at the same time, wanting his poor excuse for a father to strike him out. Part of Paul’s wish comes true, when during his first at bat of the evening, Joe Castle takes Warren Tracey deep for a homerun. However, the next at bat against Tracey, and the pitch that he throws to Castle, will have a resounding impact on the lives of all three men. While a hit batsman is not an unusual occurrence in baseball, intentionally throwing a pitch with accuracy and power at a player’s head most certainly is. The event is foreshadowed earlier in the novel, when Warren berates Paul for not hitting a batter who had hit a homerun against him in his previous at bat during a little league game.

Suffice it to say, Castle’s brilliant, albeit short career comes to an end the evening he is hit by the pitch. When Paul learns of his father’s terminal health condition, his idea is to ask Warren to apologize to Joe. Warren Tracey has maintained, from that fateful evening in 1973, all the way up to current time, that he didn’t intentionally hit Joe Castle with a bean ball; that the pitch simply got away.

Will Paul’s plan work? Does Warren Tracey have it in him to swallow his pride and do the decent thing? If he does apologize will Joe Castle accept the apology? After all, if Castle had continued to hit at even a fraction of the pace he was on, he would have wound up being one of the all time greats. What does Paul Tracey hope to achieve by getting his father to apologize? Will he be able to quell the mental demons that have plagued him since that evening, and throughout his childhood in general? All of those questions will be answered by the conclusion of the under two hundred page novel.

Grisham incorporates several other characters throughout the narrative. One of them is the colorful Calico, Arkansas newspaper, editor, Clarence Rook, who may be the key to facilitating a meeting between Warren and Joe.

“Calico Joe,“ like the vast majority of John Grisham’s work, is entertaining to read. Before becoming a best-selling author, Grisham worked as a criminal defense and personal injury attorney. Furthermore, he was a politician, elected to the Mississippi State House of Representatives, where he served from 1983 until 1990. Grisham’s first love, however, and what he dreamed of becoming when he grew up in Jonesboro Arkansas, and later Southaven, Mississippi, was a major league baseball player.

I was born in Smithtown, New York, and grew up, worked, and lived in various areas of Long Island before moving to Boca Raton, Florida where I now make my home. In addition to being an aspiring writer, I am also an English teacher. I have a Bachelor of Arts in English and a Master’s Degree in Education, both from Adelphi University in Garden City, New York. In my spare time you will find me engrossed in books, watching movies, socializing with friends, or just staying active.
View all posts by robbinsrealm →
This entry was posted in Literature and tagged Calico Joe, John Grisham. Bookmark the permalink.