At the center of writer and director Diane Bell’s (Obselidia) film “Bleeding Heart” is the story of two sisters – one who takes on the role of savior, to the other, who states she does not need saving. Jessica Biel (7th Heaven) portrays May, a yoga instructor, who having been adopted as a child, yearns to know if she has any siblings by her biological mother. As it turns out, thanks to the efforts of a private investigator, May learns she has a younger sister. May’s sister, Shiva, is played by Zosia Mamet, who is best known for her role as Shoshanna Shapiro on the HBO series “Girls.”  In contrast to May’s centered life, one that she shares with her boyfriend and yoga studio business partner, Dex (Edi Gathegi), Shiva is a prostitute, who is in a volatile relationship with her abusive pimp, Cody (Joe Anderson). Rounding out the cast is Emmy winner, Kate Burton (Grey’s Anatomy), who plays May’s adoptive mother, Martha; and four time Golden Globe nominee, Harry Hamlin (L.A. Law), who makes a cameo appearance. 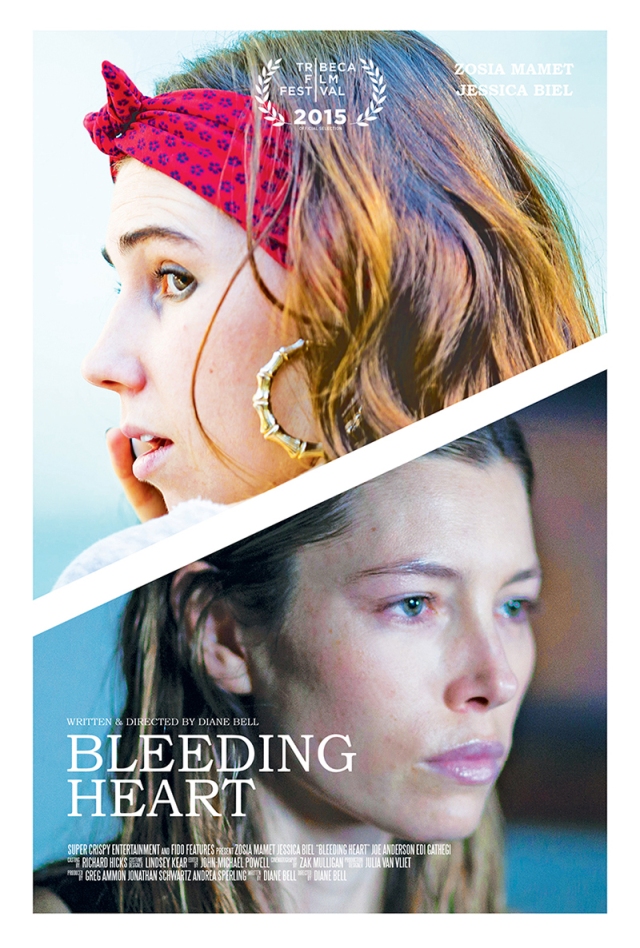 Bell’s film is atmospheric, and is also well intentioned. The movie attempts to shine a vigilant light on the very real scourge of domestic violence that exists in society, and how often the women trapped in those toxic relationships have trouble breaking free. Upon learning what Shiva does for a living, May takes it upon herself to save her, and in the process begins to neglect other aspects of her life in order to protect her half-sister. The first part of the film did draw me in as a viewer, and made me wonder as to how the relationship between May and Shiva would progress; it is the rest of the film that had me looking at my cell phone to check the time. The thriller aspect that was introduced fizzled out before it even had a chance to reach a narrative stride.

The independent drama premiered on April 16, 2015 at the Tribeca Film Festival, and has a runtime of 80 minutes. The film might have benefited from having had someone else write it, so Bell could concentrate solely on directing, which is where she demonstrates true talent. “Bleeding Heart” does feature competent performances from Biel and especially Mamet, but they were not enough to save the production from feeling like a movie that would have been better suited as something for the Lifetime Channel. The film plods along at a slow pace, on its way to a predictable climax. The plot for the most part is not believable, and the characters, outside of the credible chemistry between Biel and Mamet as the half- sisters, leaves a great deal to be desired. Gathegi, when he is on screen, is given very little to do, except to bemoan the fact that May wants to keep her classic car, which costs a great deal for upkeep, and to lambast her for giving Shiva a thousand dollars from their business fund, so she can pay her rent. Anderson’s Cody is the typical, foul mouthed, hot tempered abusive guy that has been seen in countless films.

Questions I had while watching the film: What are Shiva’s motivations? Does she have an interest in having a relationship with May? Is she merely spending time with her in hopes of getting more money? Will May’s lifestyle have a positive impact on Shiva and help her to move her life in a new direction? What lengths will Cody go to in order to keep May from taking his seemingly only source of income away from him?  All of those questions and more will be answered by film’s end. I can’t give this movie a solid recommendation because I was bored off and on while watching it. For those of you who are fans of Biel and Mamet, I would say watch the movie once, but other than their performances don’t expect much.

I was born in Smithtown, New York, and grew up, worked, and lived in various areas of Long Island before moving to Boca Raton, Florida where I now make my home. In addition to being an aspiring writer, I am also an English teacher. I have a Bachelor of Arts in English and a Master’s Degree in Education, both from Adelphi University in Garden City, New York. In my spare time you will find me engrossed in books, watching movies, socializing with friends, or just staying active.
View all posts by robbinsrealm →
This entry was posted in Movies and tagged Bleeding Heart, Diane Bell, Edi Gathegi, Harry Hamlin, Jessica Biel, Joe Anderson, Kate Burton, Zosia Mamet. Bookmark the permalink.