“Sing Street – A Gem From Ireland”

Set in Dublin, Ireland in 1985, “Sing Street” is a coming of age film which comprises the genres of comedy, drama, music and romance. At the start of the movie, the life of the main protagonist of the film, fifteen year old Conor (Ferdia Walsh-Peelo), seemingly changes overnight. Conor’s parents Robert and Penny, who are played by BAFTA nominee Aidan Gillen (Game of Thrones) and Maria Doyle Kennedy (Orphan Black), are struggling financially, and are on the cusp of separating. In order to help alleviate their burden, Conor’s parents make the decision to take him out of private school. He will now be attending the Synge Street Boys School run by the Christian Brothers. Conor soon learns that his new classmates are a bit more of the rough and tumble variety, and the oppressive headmaster, Brother Baxter (Don Wycherley), doesn’t have a high tolerance for much of anything. For example, the school has a policy, in which students are only permitted to wear black dress shoes. Conor, not knowing the rule in advance, purchased a different color, and doesn’t have the money to buy a new pair of shoes. Baxter instructs Connor to remove his shoes before leaving his office, and proceeds to have him walk around in his socks for the entire school day, including outside, where puddles have formed from the rain. Adding insult to injury, Connor is almost immediately harassed and assaulted by the school bully, Barry (Ian Kenny). 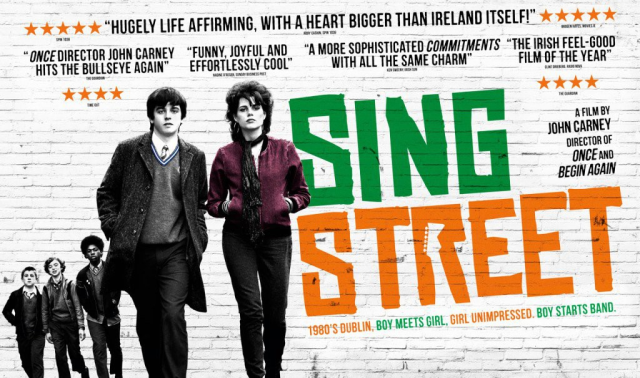 All, as it turns out, is not somber for Conor. While standing outside the entrance to the school, across the street, he spots a teenage girl smoking a cigarette. He feels an instant attraction to the mysterious girl with the hoop earrings and teased up hair. Her name is Raphina (Lucy Boynton). The viewer will learn that she has aspirations of moving to London to become a model. At the start of the film, the sixteen year old is living at a home for girls because her father has been killed in an accident, and her mother is frequently in-and-out of mental institutions. Not knowing a thing about her, Conor is determined to win Raphina over. He crosses the street, and musters up the courage to ask her if she will be in his band’s music video, in which he is the singer. After a bit of back and forth banter, during which Raphina makes Conor sing a small portion of the song “Take On Me” by the band A-ha, she writes down her phone number in his book. It would seem that things are improving for Conor. The main problem he has after his conversation with Raphina, is, that in actuality, he’s not part of a band.

Conor sets out with his new school friend, the diminutive, Darren (Ben Carolan), who appoints himself manager of the non-existent band, to get the needed members. The first person they go to, to inquire if he is interested, is the rabbit loving, Eamon (Mark McKenna), who turns out to be the perfect choice. Eamon, whose father is in a cover band, has learned to play a variety of musical instruments, which he has easy access to in his house. Furthermore, he likes to write songs, so it doesn’t take much convincing to get him to join. Provided he doesn’t give up his Saturday job stocking shelves, a non-negotiable as far as his mother (Marcella Plunkett) is concerned, the band can practice at his house. Rounding out the rest of the members of the band is the keyboard player Ngig (Percy Chamburuka), the bass player Larry (Conor Hamilton) and the drummer Garry (Karl Rice). At first, the group which names themselves “Sing Street,“ mimic the sounds of bands they collectively admire, for instance Duran Duran and The Cure. As the film progresses, however, and Conor and Eamon work on original songs, the sound of the band changes to become more their own distinct style. Conor manages to follow through on his plans to have Raphina star in his band’s music video. The day of the video shoot, the five band members are dressed in an eclectic assortment of garb, which includes the bassist Larry, outfitted as a cowboy replete with a pair of prop vampire fangs. After Raphina applies makeup to their faces, the video for the band’s original song “The Riddle of the Model” is shot by Darren on a large VHS camera.

While Connor’s sister Ann (Kelly Thornton), who the viewer learns is studying to be an architect, doesn’t get much screen time; his older brother Brendan (Jack Reynor) does. Brendan is a college dropout, who for the most part stays home, smokes hash, listens to music, and contemplates what might have been if he hadn’t given up on his dreams. He is a music aficionado, who has a large LP collection, certain records of which, he has Conor listen to, in order to help his younger brother expand his musical horizons. He also critiques the  band’s first music video, and while he thinks it’s pretty bad, he sees the potential for them to get better. Additionally, he advises that Raphina remain the model for all future videos they shoot. Brendan sees in Conor someone who has raw talent, that molded in the right way, could take his younger brother to heights he could never reach; not the least of which means leaving Ireland for London, and beyond.

How far will Conor and his band be able to pursue their musical ambitions? Will Raphina leave for London to achieve her dream of becoming a model? Will she stay because she has wound up falling in love with Conor? What will happen to Brendon? Does he wind up joining Conor, and chasing his own musical dreams? All of those questions and more will be answered by the conclusion of the film’s 106 minute runtime.

“Sing Street” was written and directed by John Carney (Begin Again).  The film premiered on January 24, 2016 at the Sundance Film Festival. I had read a number of wonderful reviews of the film, so when I learned that it had recently been made available for streaming on Netflix, I sat down to watch it a few nights ago. In addition to the cast members, who were all spot on, the soundtrack drives the movie forward at a brisk pace. The character of Conor makes for an identifiable protagonist, especially for anyone who can remember what it was like to be a teenager, and have dreams that never seemed unobtainable, no matter how grandiose. In general, at its center, “Sing Street” is a movie with a great deal of heart, that should appeal to a diverse group of film viewers.

I was born in Smithtown, New York, and grew up, worked, and lived in various areas of Long Island before moving to Boca Raton, Florida where I now make my home. In addition to being an aspiring writer, I am also an English teacher. I have a Bachelor of Arts in English and a Master’s Degree in Education, both from Adelphi University in Garden City, New York. In my spare time you will find me engrossed in books, watching movies, socializing with friends, or just staying active.
View all posts by robbinsrealm →
This entry was posted in Movies and tagged Aidan Gillen, Ben Carolan, Conor Hamilton, Don Wycherley, Ferdia Walsh-Peelo, Ian Kenny, Jack Reynor, John Carney, Karl Rice, Kelly Thornton, Lucy Boynton, Marcella Plunkett, Maria Doyle Kennedy, Mark McKenna, Percy Chamburuka, Sing Street. Bookmark the permalink.

8 Responses to “Sing Street – A Gem From Ireland”