The main protagonist of Joyce Carol Oates’, taut, thought-provoking, and suspenseful novella, “Black Water,” is Kelly Kelleher. The intelligent, twenty-six year old, political journalist works for a magazine called the ‘Citizen Inquiry.’ During a festive Fourth of July celebration, located on Grayling Island, off of the coast of Maine, at her friend and former roommate at Brown University, Buffy St. John’s house, she meets a much older gentleman. The older man is a heavyweight in the world of politics, who is referred to throughout the novella, as simply ‘The Senator.’ Kelly is immediately drawn to the man’s magnetism and disarming charm. The Senator is a politician, who Kelly has been fascinated with for a number of years; she even wrote her senior thesis on him for college.

During the party, Kelly and the Senator become inseparable, as they talk, flirt, drink, and go for a long walk, which leads to some intimate contact. The Senator, sensing an opportunity for more than just a kiss, asks Kelly if she will join him for the evening at his hotel room. The only problem is, in order to arrive at that destination, they have to take a ferry from the island, back to Boothbay Harbor on the mainland. The Senator, has had more than a few libations throughout the day, and should not be driving a car, but Kelly’s euphoria at his choosing her to be by his side, even if for just one evening, keeps her from dissuading him from driving. She even holds an extra drink in her hand for him, while he is navigating the roads, while already knocking another drink back. Oates conveys to the reader, that Kelly is willing to overlook the Senator’s risk taking behavior, because, she has an inferiority complex that makes her feel she is not worthy of the Senator’s time and devotion. Kelly not only greatly admirers his progressive political views, but has become even more taken with the Senator since spending time with him at the party – What price in the end, will she have to pay for her infatuation? 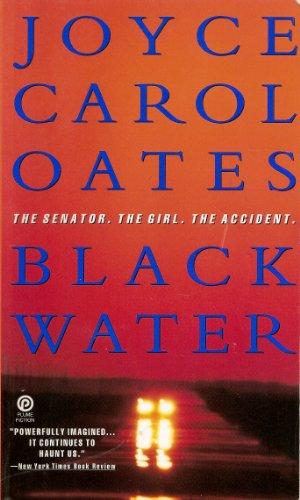 While in route to the ferry, the Senator gets lost, and in a moment ripped from a real life historical incident, drives the car off of a bridge and into the murky waters. While the Senator manages to escape to dry land, Kelly is stuck inside the car. As times passes, her life flashes before her eyes, as she waits for this man, this political icon, to return and rescue her from what may wind up being her watery tomb. (As an aside: The incident in the book, for those of you, who might not be aware, was inspired by the car accident that took place on Chappaquiddick Island, Massachusetts on July 18, 1969 involving U.S. Senator Ted Kennedy, which resulted in the death of Mary Jo Kopechne. Oates not only withheld the names, ages, and location from the real life incident, but also sets the time period of her novella in the late 1980s).

Oates invites the reader in to learn Kelly’s back story, and writes the novella from her point-of-view, as she waits for her hero to return to save the day. The intricately woven narrative utilizes flashbacks –  moving effortlessly from Kelly’s childhood, to her time attending college, to the most recent incidents that took place at the Fourth of July party. The reader takes on the role of a reluctant witness, as we learn Kelly’s thoughts and emotions, the longer she is submerged in the water, while struggling for breath, as she drifts in and out of consciousness. Oates alludes to repeating Kelly’s death scene inside of the car, only to have the prose switch to another moment in time, purposely allowing ambiguity as to Kelly’s fate to linger until the final page.

Will fiction mirror history? Does Oates once again allow an innocent woman, who although highly intelligent, to get seduced by power, by the object of her desire, which in turn cuts her life short? Does the Senator return to save Kelly? Can Oates offer her protagonist a plausible way out of her deadly situation? The book is a fast paced read at approximately 154 pages, and, through Oates’ adroit storytelling, will provide the answers to the questions posed.

I was born in Smithtown, New York, and grew up, worked, and lived in various areas of Long Island before moving to Boca Raton, Florida where I now make my home. In addition to being an aspiring writer, I am also an English teacher. I have a Bachelor of Arts in English and a Master’s Degree in Education, both from Adelphi University in Garden City, New York. In my spare time you will find me engrossed in books, watching movies, socializing with friends, or just staying active.
View all posts by robbinsrealm →
This entry was posted in Literature and tagged Black Water, Joyce Carol Oates. Bookmark the permalink.