“Fast Times at Ridgemont High” doesn’t begin in a classroom, or on the first day of school for that matter, but instead at the Ridgemont Shopping Mall. The song “We Got The Beat” by the “The Go-Go’s” plays as the background for a montage that centers on things of interest to teenagers in the mall, such as video games, designer jeans and pizza. A good majority of the featured cast works at the mall. Stacy Hamilton portrayed by Oscar nominee, Jennifer Jason Leigh (The Hateful Eight), works at Perry’s Pizza with her best friend, Linda, a role acted by Phoebe Cates (Drop Dead Fred). Linda fancies herself an expert on all things having to do with sex and older men. Stacy’s good natured brother, Brad, played by Emmy nominee, Judge Reinhold (Beverly Hills Cop), is striving for success, as well as some affection from his girlfriend; he works at a fast food establishment. The shy and well-meaning, Mark (Brian Backer), takes tickets at the movie theater. He really likes Stacy, and bemoans, to his ticket-scalping, best friend, the semi-sleazy Mike Damone (Robert Romanus), that all the action is on the other side of the mall away from the theater; especially the food court where Stacy works. (As an aside: Emmy and Golden Globe nominee Justine Bateman was offered the part of Linda, but turned the role down; it wound up being the right career move. The same year Fast Times at Ridgemont High came out, she began playing the character of  Mallory Keaton on the sitcom, Family Ties, which lasted until 1989). 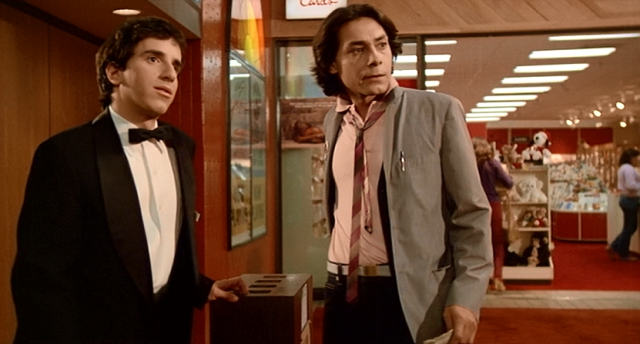 Additional members of the cast, who don’t work or hustle at the mall, are there just for fun, like Jeff Spicoli, who according to rumor has been high since the third grade. He is the standout character of the film, and is portrayed by two time Oscar winner, Sean Penn (Mystic River). Besides almost always smoking pot, he is perpetually late to class, and dreams of being a surfboarding champion. He is usually accompanied by his two stoner friends, played by Golden Globe nominee, Eric Stoltz (Mask) and Emmy and Golden Globe winner, Anthony Edwards (ER). Rounding out the cast is two time Emmy winner Ray Waltson’s (Picket Fences) character of the truancy conscious, history teacher, Mr. Hand, as well as biology teacher, Mr. Vargas, played by versatile, character actor, Vincent Schiavelli. Furthermore, Oscar winner, Forest Whitaker (The Last King of Scotland) has a small role as Ridgemont High’s star football player, Charles Jefferson. Additionally, there are two scenes featuring – blink and you’ll miss him appearances by – Nicholas Cage, billed at the time as Nicholas Coppola, in his second acting job after the television movie “Best of Times.”  (As an aside: According to people on the set, Sean Penn got so immersed in his character, that he would only answer to the name Spicoli, so much so, that the director wound up having a crew member put that name on his dressing room door). 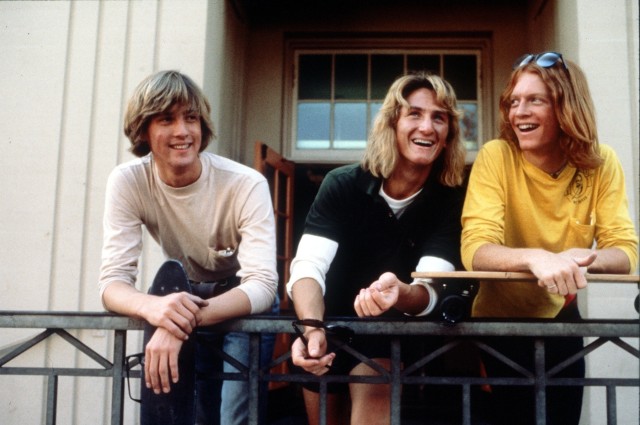 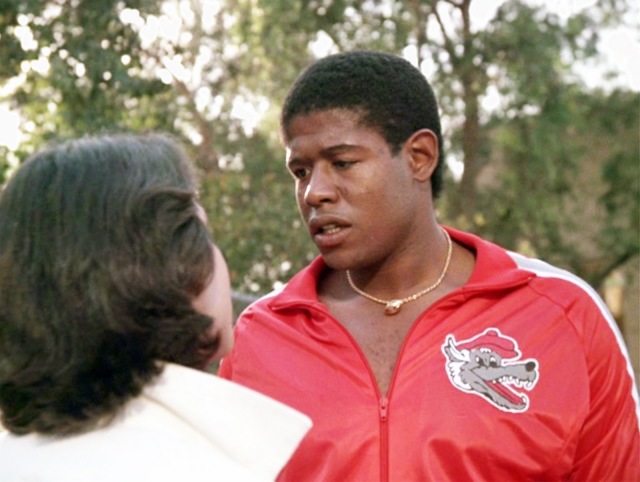 The plot of the film, which is parts comedy and drama, is straightforward. I am not going to single out particular scenes because it would serve only to lessen the enjoyment for those of you who are first time viewers, or like myself, haven’t seen the movie in a number of years. Suffice it to say, that it follows the aforementioned students through a year of their high school lives. The film premiered on August 13, 1982, and unlike other offerings of its genre, that had preceded it, the movie focused on current time, instead of a nostalgic look at the 1950s through the 1970s. The teens working dead end jobs and dealing with relationship flux, as well as their antics at school, provided the comedic tones of the movie. Conversely, subjects such as a friend’s betrayal, teenage pregnancy and abortion were at the heart of its dramatic moments. Credit, in my opinion, must be given for the film’s authenticity; it didn’t sugar coat anything for the sake of a PG rating, or to deflect controversy. The filmmakers present an honest representation of what it is like at an age where everything is magnified; from falling in love for the first time, to making impulsive choices, to dealing with rejection, and moving forward.

The film marked the directorial debut of Amy Heckerling (Clueless), thanks to four time Oscar nominee, David Lynch (Mulholland Drive) turning the job down. BAFTA and Oscar winner, Cameron Crowe (Almost Famous) wrote the screenplay, adapted from his book of the same name, which was published on September 15, 1981 by Touchstone / Fireside, a division of Simon & Schuster. For authenticity in his work, Crowe, at twenty-two years of age, posed as a high school senior, and attended classes for one year at Clairemont High School in San Diego. Although regarded as a modest hit at the time of its initial theatrical run, Crowe’s efforts were not in vain. The film would go on to achieve a generation of fans, with its release on VHS in the mid 1980s. In 2006 “Fast Times at Ridgemont High” was picked by Entertainment Weekly, on the magazine’s list of the top 50, as the second best high school movie of all time, bested only by “The Breakfast Club,” but still beating an impressive array of films. 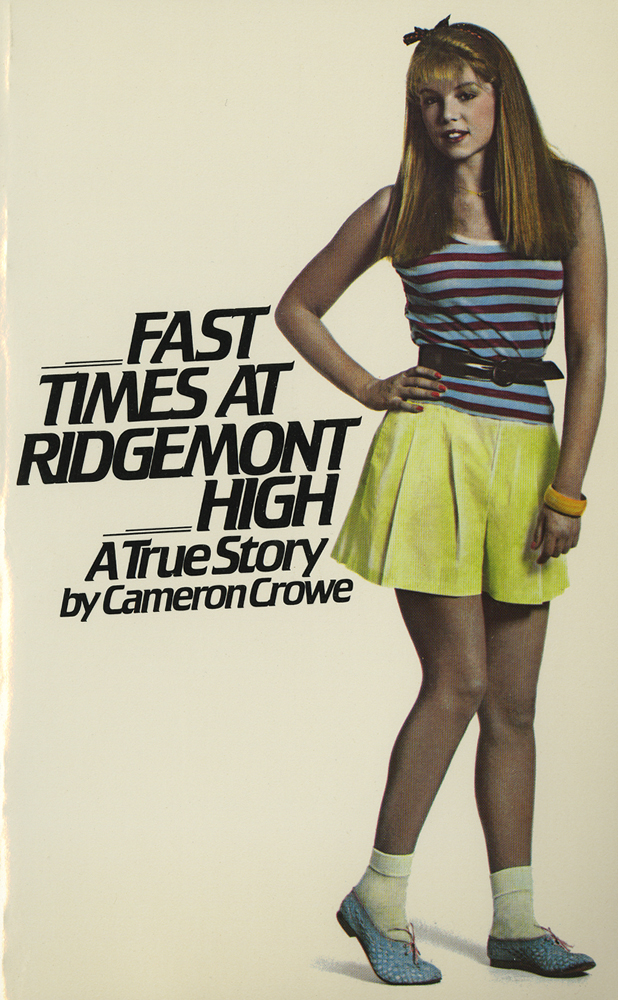 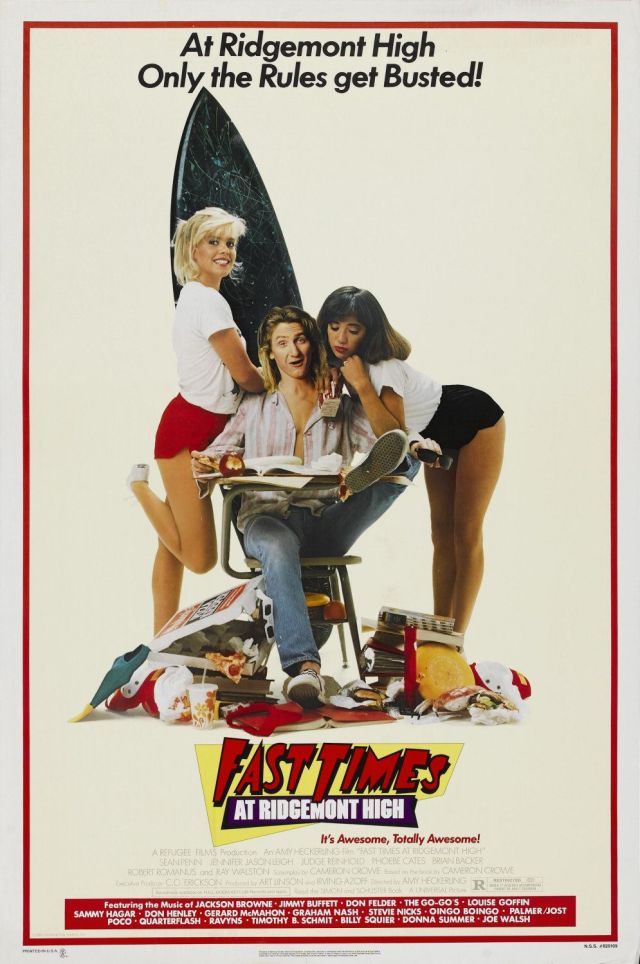 I was born in Smithtown, New York, and grew up, worked, and lived in various areas of Long Island before moving to Boca Raton, Florida where I now make my home. In addition to being an aspiring writer, I am also an English teacher. I have a Bachelor of Arts in English and a Master’s Degree in Education, both from Adelphi University in Garden City, New York. In my spare time you will find me engrossed in books, watching movies, socializing with friends, or just staying active.
View all posts by robbinsrealm →
This entry was posted in Movies and tagged Amy Heckerling, Anthony Edwards, Brian Backer, Cameron Crowe, David Lynch, Eric Stoltz, Fast Times at Ridgemont High, Forest Whitaker, Jennifer Jason Leigh, Judge Reinhold, Justine Bateman, Nicholas Cage, Phoebe Cates, Ray Waltson, Robert Romanus, Sean Penn, The Go-Go's, Vincent Schiavelli. Bookmark the permalink.