The Netflix series, “GLOW,” takes place in Los Angeles, California, in the mid 1980s. At the start, Alison Brie, (Community) who portrays Ruth Wilder, a determined and serious minded actress, is auditioning for yet another mediocre role; a part she winds up not getting. Frustrated, Ruth confronts Mallory, (Amy Farrington) the casting director, in, of all places, the ladies room, to find out why she has been called in to read on multiple occasions, but never gets a role in anything. Mallory informs Ruth, that she is the type of actress that directors say they have in mind when they’re seeking someone real, but after seeing her, they always change their minds. When Ruth returns home later that evening, there is a message from Mallory on her answering machine. The only information Ruth receives is that there is a casting call, one that Mallory herself is not running, that is seeking unconventional women; needless to say, Ruth is intrigued. The next day, when Ruth arrives at the audition, it is the opposite of what she expected. Instead of taking place at an office, Ruth finds herself in a rundown gym, sitting on bleachers, opposite a wrestling ring. As it turns out, the opportunity she is trying out for, is to be cast as a female wrestler on a show called GLOW, an acronym for the Gorgeous Ladies of Wrestling. (As an aside: The inspiration and the characters for Netflix’s GLOW, were taken from the women’s professional wrestling promotion, of the same name, which was founded in 1986 by David McLane. The wrestling show was filmed in Las Vegas, Nevada, and although it would survive in other incarnations, finished its television run in 1989.)

Marc Maron (Harvey Beaks) plays the character of washed-up, B-movie, writer and director, Sam Sylvia. It’s his job to cast the right ensemble, as well as script and direct the pilot episode of GLOW, in the hopes that it will get picked up by a network. His interest in the job extends beyond just monetary gain for himself. What he desires most of all, is to have Bash, (Chris Lowell) the executive producer, finance his next film. Firstly, however, he has to pick the ladies to make up the show’s cast. Ironically, it appears, at least at the outset, that Ruth might not be one of the ladies that makes the cast.

Despite her acting experience and strong work ethic, try as she may, Ruth has a difficult time impressing on Sam that she is the right fit for the show. Sam’s mindset doesn’t change until Betty Gilpin’s, (Nurse Jackie) character, former soap-opera actress, Debbie Eagan, who left her television career to raise her child, enters the gym. Debbie is incensed when she learns that Ruth, whom she considered a close friend, slept with her husband, Mark (Rich Sommer). Debbie gets into a confrontation with Ruth, and in front of everyone, slaps Ruth across the face, and proceeds to drag her around the ring. Sam witnesses the event, and his imagination goes into overdrive. He pictures Debbie as his production’s hero squaring off against Ruth, her evil nemesis, as the two women compete in a main event match, in front of a sold out audience that is soaking up every moment of the mayhem. While it takes some convincing on Sam’s part, he doesn’t give up until Debbie agrees to join the cast. Rules that apply to the other ladies, for example, all of them having to live together at the same motel, doesn’t apply to her. 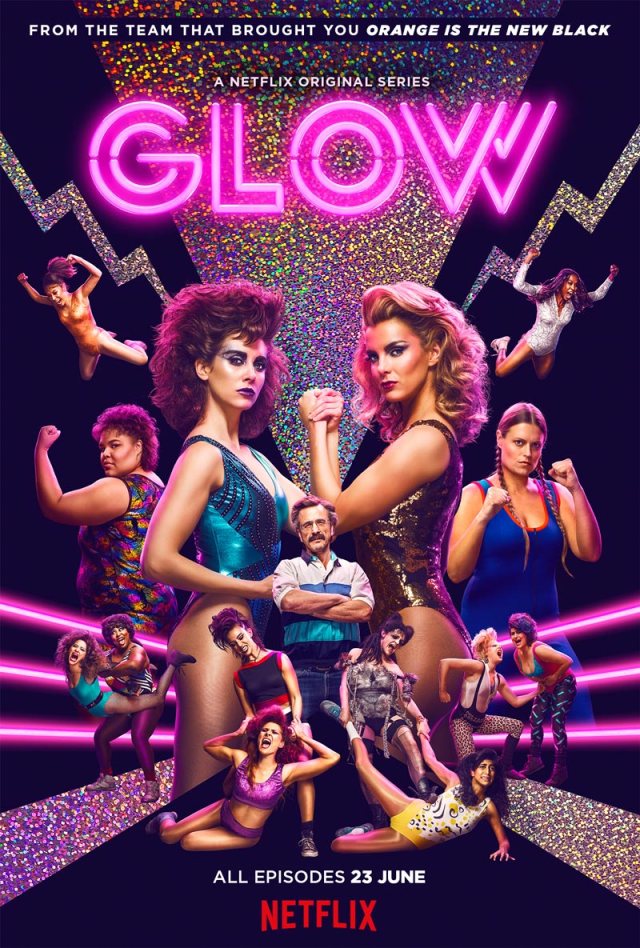 The success of “GLOW,“ in addition to being credited to Brie, Gilpin, and Maron, is due in large part to its overall ensemble cast. The numerous characters they portray come from all different walks of life. For the sake of brevity, I will only mention some of them. There is the no-nonsense, professional stunt-woman, Cherry (Sydelle Noel), who Sam leans on to help get the ladies into wrestling shape. Carmen (Britney Young), wants to follow in the footsteps of her professional wrestling family members, her father, (Winston James Francis), and her brothers, who are played by real life wrestlers, Carlos Colón Jr. and George Murdoch. In addition, there is British singer-song writer Kate Nash, who plays Rhonda Richardson, as well as “American Idol” contestant Jackie Tohn, in the role of party-girl, Melanie. Lastly, playing Tameé, is Kia Stevens. She is a real life professional wrestler, known to fans as ‘Awesome Kong,’ ‘Amazing Kong,’ and ‘Kharma.’ There are other wrestlers who have cameos and small parts throughout season one that wrestling fans should recognize.

“GLOW” was created by Liz Flahive and Carly Mensch. Premiering on Netflix on June 23, 2017, the series is an often times humorous and heartfelt show. In the interest of full disclosure, the show does, at times, delve into offensive stereotypes, that wouldn’t be welcomed or well-received on a current television show, but should be viewed in the context of the time period in which the series takes place. The ten episodes of the first season, were, overall, well written, and the members of the ensemble cast nailed their respective roles. The chemistry between Wilder and Eagan’s characters is enjoyable to watch, as they journey to become in-ring foes. Ruth playing the character of the villain, the American hating Russian, ‘Zoya the Destroyer,’ while Debbie, is her polar opposite, the all American good girl, dubbed ‘Liberty Belle.’ I don’t think a viewer has to be a fan of professional wrestling to enjoy the series, and I, for one, am interested to see where the creators will take season two.

I was born in Smithtown, New York, and grew up, worked, and lived in various areas of Long Island before moving to Boca Raton, Florida where I now make my home. In addition to being an aspiring writer, I am also an English teacher. I have a Bachelor of Arts in English and a Master’s Degree in Education, both from Adelphi University in Garden City, New York. In my spare time you will find me engrossed in books, watching movies, socializing with friends, or just staying active.
View all posts by robbinsrealm →
This entry was posted in TV Series and tagged Alison Brie, Amy Farrington, Betty Gilpin, Britney Young, Carlos Colón Jr, Carly Mensch, Chris Lowell, George Murdoch, GLOW, Jackie Tohn, Kate Nash, Kia Stevens, Liz Flahive, Marc Maron, Rich Sommer, Sydelle Noel, Winston James Francis. Bookmark the permalink.