“In Search of The Angel of Death”

The movie “The Boys from Brazil” was directed by Oscar winner Franklin J. Schaffner (Patton). The compelling and riveting film premiered on October 5, 1978, in New York City, New York. Parts drama, sci-fi, and thriller, it has a runtime of 125 minutes. The movie was based on the novel of the same name, written by best-selling author, Ira Levin, who had his work adapted for the screen by Heywood Gould (Trial by Jury).  The film centers on a Machiavellian plan organized and implemented by Dr. Josef Mengele, who was a German SS officer and physician, stationed at Auschwitz concentration camp, who was dubbed the “The Angel of Death; ” a title that was appropriate, due to the atrocious experiments Mengele performed on innocent prisoners. He was particularly interested in operating on twins. To his warped way of thinking, he thought by doing so, he would be able to discover a way of tracing the origins of a wide array of genetic diseases.

The role of Mengele in the film is completely embodied by Oscar and Golden Globe winner, Gregory Peck (To Kill a Mockingbird). The project Mengele wants to see come to fruition, has taken millions of dollars, and two decades of work, and it involves the following scenario: Over a period of two years, ninety-four men, that worked as minor civil servants, have reached the age of sixty-five, and are married to women considerably younger, are to be assassinated. Mengele wants to replicate the conditions of Adolf Hitler’s life, in hopes that one of the children of the ninety-four, will grow up to become the next Hitler, and bring about the Fourth Reich. Attempting to prevent Mengele from realizing his dream, is Nazi hunter, Ezra Lieberman, portrayed by Oscar winner, Sir Laurence Olivier (Rebecca). The Lieberman character was based on Holocaust survivor and Nazi hunter, Simon Wiesenthal; a man, who at the conclusion of World War II, forgoes his formal training as an architect, and dedicates his life to bringing perpetrators of the Nazi genocide to justice. Wiesenthal founded and ran the Jewish Documentation Center in Vienna, Austria, and over the course of his lifetime, helped to aid in the capture and conviction, of approximately 1100 Nazi war criminals, chief among them, Adolf Eichmann, who was one of the major organizers of the Holocaust. While the “Boys From Brazil” is a work of fiction, the ‘In Search’ of episode “The Angel of Death,” presents the true story of Simon Wiesenthal’s three decade pursuit to apprehend, and have Mengele stand trial for the crimes he committed.

“World War II is not just a memory in the coastal mountains of Brazil. The date is April 22, 1978. The place a small hotel outside Rio de Janeiro. A noisy party at the ‘Hotel Tyll’ is broken up by police, who discover the people are celebrating something odd, the 89th anniversary of the birthday of Adolph Hitler. The raid resulted in the capture of a wanted Nazi named Gustav Wagner. The capture was made possible by Simon Wiesenthal, who is known as ‘the hunter,‘ for he has brought more than 1100 Nazi criminals to justice.”

While the voice over narration that begins the episode is spoken, viewers are shown images of the hotel, party, and the wanted Nazi that was captured, as well as, video footage of Simon Wiesenthal. The episode premiered on February 1, 1979, and was one of the 144 episodes in the series, which ran from September of 1976 through March of 1982. Each of the series’ eclectic episodes, examined, among other subjects, the historical, mythical and supernatural. The episodes were hosted by Leonard Nimoy, (Star Trek), who also added the voice over narration to what was being shown on screen. The episode pertaining to the hunt for Mengele left me, as so many of the offerings of the show did, with questions that I was curious enough to look up on the internet after it concluded. In addition, I watched other shows that dealt with the subject of the hunt for Mengele, for example, an episode of “Nazi Fugitives,” that aired this past June, on the AHC channel. 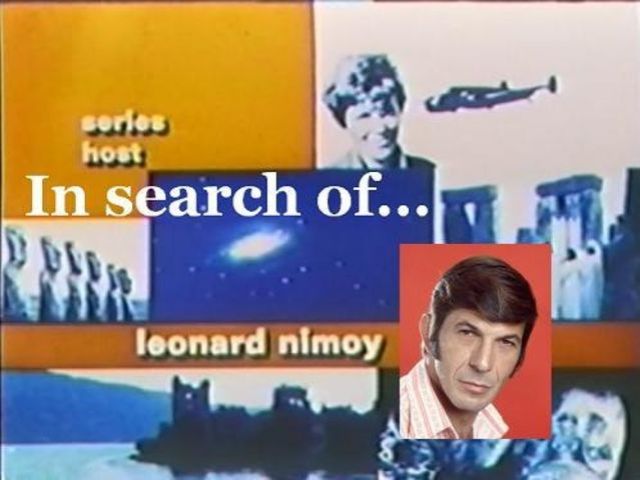 During the episode, while Mengele’s crimes are addressed, it primarily concerns itself with his life post, World War II, which began, ten days, before the Russian Red Army liberated Auschwitz. Mengele, knowing that the Germans were on the verge of defeat, left the camp by way of his chauffeured car, which took him back to his hometown of Günzburg in Bavaria. The Mengele family, and the factory they owned, which produced farm equipment, was the largest employer in the town. As the camera shows footage of the town, Nimoy mentions that the ‘In Search’ of crew experienced outright hostility from its residents while trying to film, and no one from Günzburg speaks on camera. Afterward, the episode deals with Mengele’s life on the run outside of Germany.

Simon Wiesenthal, The National Intelligence Agency of Israel (The Mossad), and other governments, as well as freelance Nazi hunters, pursued Mengele across the continents of Africa, Europe, and South America. Time and again, the infamous war criminal proved to be, not only illusive, but lucky. In one instance, in 1964, at the Hotel Tirol, in Paraguay, he avoided capture by a group of Holocaust survivors by a mere ten minutes. According to sources, Mengele was tipped off, and fled in such a hurry, that all he had with him were the pajamas he was wearing. After the capture and execution of Adolf Eichmann, Mengele’s paranoia and desperation to avoid being brought to justice forced him to live in remote parts of the South American jungle. The areas, according to Nimoy, are places where few outsiders ever venture, and those that did go to try and hunt down Mengele, did so at great risk to themselves.

Speaking on camera during the episode are: Simon Wiesenthal; Dr. Ella Lingens, an Austrian woman, who because she saved Jews from the Nazi’s, was sent to Auschwitz, and forced to work in the hospital as one of Dr. Mengele’s assistants; Berndt von Staden, who was the West German Ambassador to the United States from 1973 until 1979, as well as a former minister of the embassy of Israel to the United States. Furthermore, the episode contains archival footage and reenactments that are shown to the viewer. The informative episode held my interest throughout its runtime. As of the writing of this post, it is available, in its entirety, on youtube.com. For those of you interested in World War II history, especially its aftermath, and the efforts made by those who sought to bring war criminals to justice, this is an episode which should hold your interest.

I was born in Smithtown, New York, and grew up, worked, and lived in various areas of Long Island before moving to Boca Raton, Florida where I now make my home. In addition to being an aspiring writer, I am also an English teacher. I have a Bachelor of Arts in English and a Master’s Degree in Education, both from Adelphi University in Garden City, New York. In my spare time you will find me engrossed in books, watching movies, socializing with friends, or just staying active.
View all posts by robbinsrealm →
This entry was posted in TV Series and tagged Adolf Eichmann, Berndt von Staden, Dr. Ella Lingens, Dr. Josef Mengele, Franklin J. Schaffner, Gregory Peck, Heywood Gould, In Search of The Angel of Death, Ira Levin, Laurence Olivier, Leonard Nimoy, Simon Wiesenthal, The Boys from Brazil. Bookmark the permalink.

2 Responses to “In Search of The Angel of Death”