“Horror at the Cecil Hotel”

The Cecil Hotel, located at 640 S. Main Street in central Los Angeles, first opened its doors in 1924. The hotel, at the time, primarily catered to business people, and it is generally regarded by historians as having been a fine establishment that served the needs of the business community. These days, the Cecil Hotel is the last place a respectable business person would want to stay, and is about as far removed as an individual can get from the glitz and glamour of Hollywood. The 700 room hotel has approximately 100 permanent residents. The remainder of the rooms are rented out by the week, day, and often by the hour. The denizens that populate the hotel, or make use of its rooms, for the most part, consist of prostitutes, drug users and sellers, and the downtrodden. The Cecil Hotel is a place where questions are not asked, as people go about their business. In addition, it has also been described by some as a magnet for evil; a topic which ID (Investigative Discovery) television examines during its three part special on the Cecil Hotel, and several of its guests and mysterious deaths.

The first episode deals with two occupants that lived for a period of time in room 1402 of the hotel. The first was notorious serial killer, Richard Ramirez, A.K.A. “The Night Stalker.” Ramirez was a remorseless murderer, rapist, and avowed Satanist, who would, through his series of brutal crimes, cause widespread panic and fear in the greater Los Angeles and San Francisco areas from April 10, 1984 until his capture on August 31, 1985. After a lengthy trial, that concluded in 1989, Ramirez was convicted of 13 murders, 5 counts of attempted murder, 11 counts of sexual assault and 14 counts of burglary. He was sentenced to death, and sent to San Quentin Prison, but due to his legal appeals, lived for years on death row, before dying of B-cell lymphoma on June 7, 2013.

Austrian writer and journalist, Jack Unterweger became obsessed with Richard Ramirez and the extremely repugnant life he had lived. He convinced a magazine that he did work for, to send him to California, to write a freelance piece on crime and Ramirez, and the magazine agreed to the assignment. Unterweger reserved room 1402, a month in advance of his trip. In fact, he wouldn’t agree to stay in any other room in the hotel; he needed to feel that he was in the presence of Ramirez.

While in Los Angeles, Unterweger arranges to ride along with LAPD Detective Leary, who shows him the seedier side of Los Angeles, as well as introduces him to some members of its criminal element; he’s even taken to the crime scene of a murdered prostitute. Furthermore, Unterweger talks to whoever will give him the time of day, that was living at the Cecil during the time Ramirez rented a room there. During a conversation with long-time resident Billy Flynn, the man tells Unterweger about how very strange things happened at the hotel. For example, Flynn talks about the mysterious and sudden murder of a sweet woman, which took place in 1982.  According to Flynn, everyone liked the woman; she was the type of person who wouldn’t harm anyone. Unterweger follows up on Flynn’s statement, by asking him what year he (Flynn) moved into the hotel – Flynn’s answer – 1982.

During his time in Los Angeles, Unterweger reads every article that was published about Ramirez during his reign of terror; everything he is doing, he claims, is under the guise of writing an article that will be as authentic as can be. Does Unterweger, however, have a more sinister agenda in mind? How far is he willing to take things in order to feel as close to his subject as possible?

The second episode, “The Girl in the Water Tank,” in my opinion, was the most interesting of the three episodes, because it presents a mystery that has still not been solved – perhaps never will be – and has ignited a number of conspiracy theories as to what actually took place. The episode centers on first generation, Canadian, Elisa Lam, the daughter of immigrants from Hong Kong. The twenty-one year old, Lam, arrived in Los Angeles on January 28, 2013 – it was her first ever trip alone. As soon as she checked into the Cecil Hotel, she realized she had made a mistake. Low on funds, and wanting to make the best of her time in California, where she didn’t know anyone, she decided to grin and bear it. When her parents, whom she spoke to everyday on the phone, asked her about her accommodations, in order to assuage their concerns, she lied and told them that where she was staying was safe. The fact that Lam talked to her parents everyday was one of the ways they knew something was wrong, after not hearing from her for a several days. She also wrote a daily travel blog, that also hadn’t been worked on, which was not the norm for Lam. The last time Lam was known to be alive was on January 31, 2013.

Upon entering Lam’s room, investigating detectives, Brooks and Ryan, discovered no signs of foul play. Additionally, Lam’s computer, purse, and watch were all in the room; the only thing of note that was missing was her cell phone. In an attempt to find her, the detectives began to search all fifteen floors of the hotel, and questioned everyone they could; no one was able to provide answers. On February 19, 2013, the search for Lam came to an end, when her naked body was discovered floating in one of the hotel’s water tanks. The fact that she was on the roof of the hotel, dead in one of the water tanks, immediately landed suspicion on hotel employees. Access to the door to the roof was alarmed, and a key card was needed to open it. Detectives asked for, and received, all of the surveillance video from the hotel cameras, from the time of Lam’s stay at the hotel. The detectives were informed, however, by a member of staff, that a number of the cameras didn’t work, and were merely kept in place as a deterrent to crime. The footage detectives were able to view, that captured Lam on what was possibly the last evening of her life, only served to help deepen the mystery as to how she died.

The third and final episode, “Intertwined,” revolves around an event that occurred outside of the hotel on October 12, 1962. A delivery driver, on his regular route, discovers two dead bodies: The body of married, twenty-seven year old, Pauline Otten, who was on top of the body of sixty-five year old, widower, George Gianinni; a great deal of blood was present near the bodies. The coroner would state in his report that Pauline died from broken bones, internal injuries and a skull fracture, while George died from a broken neck.

At first, it appears to veteran Detective Salazar, and his rookie partner, Detective Duffy, as if both individuals had fallen or had been pushed out of a ninth floor window, but by who? Naturally, the focus of the detectives’ investigation begins with Pauline’s husband, Dewey. He admits that he had gone to her room at the hotel to confront Pauline about their marital difficulties, but insists that when he left her, she was fine, and that he had nothing to do with her or George’s death.

During their investigation, detectives can’t find any evidence linking Pauline and George, as having had anything to do with one another prior to their deaths. In the end, the most unlikely piece of evidence solves the crime, and it had to have been a major relief to Detective Salazar. As it turns out, when Salazar was a rookie detective, the first case he was ever assigned to took place on January 15, 1947. On that date, the murdered and mutilated body of Elizabeth Short, who is more commonly referred to as ‘The Black Dahlia,’ was discovered. Though numerous leads as to the identity of her killer were brought to the attention of investigators, no one was ever arrested or charged with the crime. The decades old mystery, as to who killed and dismembered her, remains unsolved. In an eerie turn of events, historical research has confirmed that Elizabeth Short was a frequent visitor to the bar at the Cecil Hotel, and in fact, it was the last place she was ever seen alive. 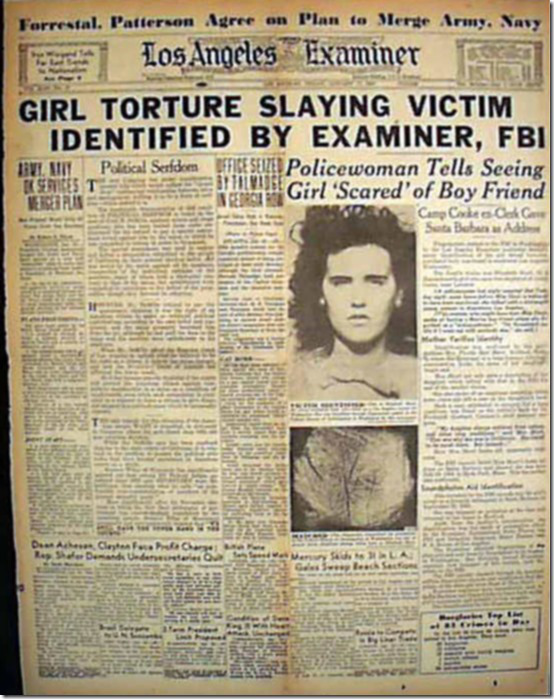 For those of you who are fans of the FX show “American Horror Story,” you most likely know that the Hotel Cortez, the main location used in season five of the series, took its inspiration from the Cecil Hotel. Commenting, amongst others, throughout the three episodes, are: true crime author and journalist, Frank C. Girardot Jr; author and former LA Times editor, Larry Harnisch; LAPD Detective Supervisor, Sal LaBarbera; LA Weekly writer and crime historian, Hadley Meares; FBI special agent and profiler, Gregg McCrary; and author and crime historian, Joan Renner. The three episodes held my interest throughout, and prompted me to go on-line, to look further into certain pieces of information that were mentioned during the series. For those of you who are interested in true crime, as well as the implausibility of how crimes are sometimes solved, you will more than likely find watching the three episodes to be interesting viewing.

I was born in Smithtown, New York, and grew up, worked, and lived in various areas of Long Island before moving to Boca Raton, Florida where I now make my home. In addition to being an aspiring writer, I am also an English teacher. I have a Bachelor of Arts in English and a Master’s Degree in Education, both from Adelphi University in Garden City, New York. In my spare time you will find me engrossed in books, watching movies, socializing with friends, or just staying active.
View all posts by robbinsrealm →
This entry was posted in TV Series and tagged Elisa Lam, Elizabeth Short, Frank C. Girardot Jr, George Gianinni, Gregg McCrary, Hadley Meares, Horror at the Cecil Hotel, Intertwined, Jack Unterweger, Joan Renner, Larry Harnisch, Pauline Otten, Richard Ramirez, Room 1402, Sal LaBarbera, The Black Dahlia, The Cecil Hotel, The Girl in the Water Tank. Bookmark the permalink.

7 Responses to “Horror at the Cecil Hotel”