“You Were Never Really Here”

The bulky and grizzled protagonist, Joe, in the atmospheric, disquieting, and well acted film, “You Were Never Really Here,” is a hammer wielding, mercenary. When he is not caring for his elderly mother, (Judith Roberts), with whom he lives in a rundown, New York apartment, he searches for kidnapped girls.

Joe is a former military combat veteran, and FBI agent, whose character is completely embodied by three time Oscar nominee, and Golden Globe winner, Joaquin Phoenix (Walk the Line). He is not afraid to use violence but, at the same time, he is a broken man who suffers from PTSD (posttraumatic stress disorder) and has suicidal tendencies. For example, on a number of occasions Joe appears to be asphyxiating himself, only to rip the bag off of his head before he loses consciousness. The disturbed feelings appear to be brought on from a combination of his years of military service, and the abuse he and his mother suffered at the hands of his violent father. The film, as a whole, features little in the way of exposition, and is not heavy on dialogue, so Joe’s past is revealed to the viewer through a series of tangential flashbacks, which are interspersed with what is taking place during the present. (As an aside: The majority of the violence that does take place in the film, is for the most part, implied; the viewer getting to the see the aftermath of the violence that has taken place, or quick snippets, for example, through the use of security camera footage). 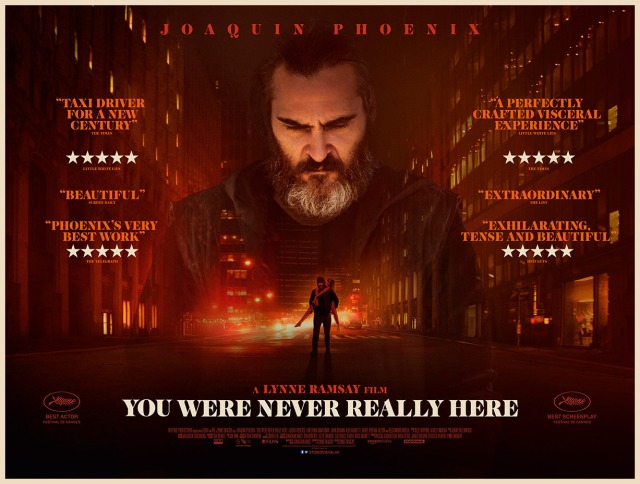 The plot of the film, such as it is, which is a complaint a number of people have had with the movie, is primarily straightforward. Joe is given a mission by his handler, John McCleary (John Doman), to save Nina Votto (Ekaterina Samsonov). She is the thirteen year old daughter, of corrupt politician, New York State Senator, Albert Votto (Alex Manette). Nina has been abducted by a sex trafficking ring. Her abductors are holding her at a secret Manhattan brothel, where she and other young girls are forced to perform sexual acts for the sick minded, wealthy clientele. While tracking Nina down, Joe learns that the job he has taken, is more intricate than merely the safe return of a politician’s daughter, as his mission becomes entangled with conspiracy and murder. Joe must find and rescue Nina from her depraved captors before she meets a horrifying end. In order to do so, Joe does whatever it takes to make sure he completes his mission.

Will Joe be able to fight his demons long enough so he can successfully rescue Nina? What will happen if he can’t? Is she sold to the highest bidder, and shipped off to another part of the world never to be seen again? Will she be murdered in order to protect the secrets of those in power?

Written and directed by two time BAFTA winner, Scottish filmmaker, Lynne Ramsay (Swimmer), the film was based on the novella of the same name, written by Jonathan Ames. Parts drama, mystery and thriller, “You Were Never Really Here” premiered at the Cannes Film Festival on May 27, 2017. In addition to being nominated for the prestigious Palme d’Or, Phoenix won Best Actor, and Ramsay shared the award for Best Screenplay with Yorgos Lanthimos (The Killing of A Sacred Deer). The film’s 89 minute runtime moves along at a brisk pace, which is helped in great part thanks to the evocative score composed by Oscar nominee, Jonny Greenwood (Phantom Thread).

I found “You Were Never Here” to be a captivating film. I am of the opinion, that most viewers, whether they like the film or not, will not soon forget what they have watched. In closing, this is the kind of movie where there is no clear cut resolution to what has just been shown, leaving it up to the individual viewer to determine the reality of what has taken place. This was certainly a film, which left me with more questions than answers.

I was born in Smithtown, New York, and grew up, worked, and lived in various areas of Long Island before moving to Boca Raton, Florida where I now make my home. In addition to being an aspiring writer, I am also an English teacher. I have a Bachelor of Arts in English and a Master’s Degree in Education, both from Adelphi University in Garden City, New York. In my spare time you will find me engrossed in books, watching movies, socializing with friends, or just staying active.
View all posts by robbinsrealm →
This entry was posted in Movies and tagged Alex Manette, Ekaterina Samsonov, Joaquin Phoenix, John Doman, Jonathan Ames, Jonny Greenwood, Judith Roberts, Lynne Ramsay, Yorgos Lanthimos, You Were Never Really Here. Bookmark the permalink.

15 Responses to “You Were Never Really Here”