On October 25, 1978, John Carpenter’s “Halloween” premiered in Kansas City, Missouri. The movie has gone on to achieve iconic status within the annals of horror films. From what I’ve read, and from interviews that I’ve seen with cast members and crew involved with the original production, not one person thought the film would launch a franchise, but, that it did. Since the release of the original, and prior to “Halloween” (2018), there have been nine films produced for the franchise, eight of which feature the seemingly, indestructible killing machine known as Michael Myers. The filmmakers of “Halloween” (2018) ask viewers to forget all of the films that have been produced since the first, because their film is a direct sequel to what took place in the original. 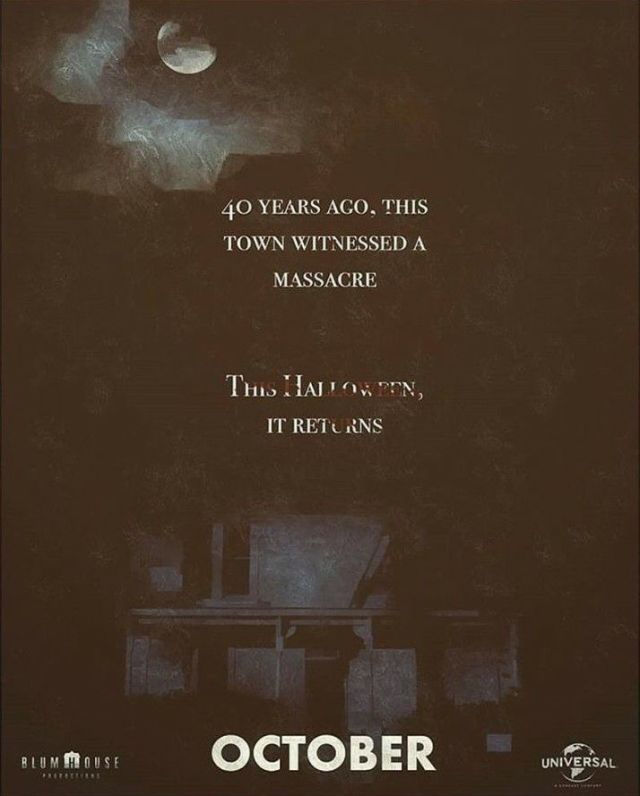 The opening of “Halloween” (2018) centers on two podcasters, Aaron (Jefferson Hall), and Dana (Rhian Rees), as they wait to enter the mental health hospital that has been Michael Myers’ home for the past forty years. He has been under psychiatric care, not uttering, a single syllable, since he was arrested for the murders of his sister Judith, as well as a handful of teenagers. Michael is under the care of Dr. Sartain (Haluk Bilginer). Prior to Dr. Sartain, Michael had been studied and diagnosed as, nothing more than, evil incarnate by Dr. Sam Loomis. The character of Dr. Loomis, was brought to cinematic life, in Carpenter’s original film, by BAFTA award winner Donald Pleasence (The Great Escape). The pair of podcasters, whose show focuses on true crime, are hoping to get Michael to break his silence. In an attempt to get him to do just that, Aaron has been given, from his friend in the attorney general’s office, the mask that Michael was wearing when he killed. As you might have guessed, Michael has nothing to say. (As an aside: Two different actors, James Jude Courtney, and Nick Castle (The Last Starfighter), play ‘The Shape’ as Michael Myers is referred to in the credits. Castle was one of five actors to play Myers in the original “Halloween”).

After the opening scene, the film rolls the credits, and like the first two films in the franchise, as the credits play, the camera zooms in on a jack-o-lantern. This time, however, the jack-o-lantern has been destroyed, but, as the music continues to grow, the jack-o-lantern, begins to inflate, until it once again is fully formed. John Carpenter, along with his son Cody (Masters of Horror), and godson Daniel Davies (Condemned), composed the music for the film, which helps to heighten what is shown during its 106 minute runtime.

BAFTA and two time Golden Globe winner Jamie Lee Curtis (Trading Places), returns to portray Laurie Strode, her role from the original movie, and she completely embodies the character. Since the fateful night forty years earlier, when she did battle with Michael Myers and survived, Laurie’s life has been plagued by trauma. She still lives in the town of Haddonfield, Illinois, but has had two failed marriages, and lives, for the most part, as a recluse, at her home in the woods, which is more like a fortress. The house is situated behind an electronic gate, has a secret room, and there are security cameras everywhere, as well as spotlights that can light up the property in an instant. Furthermore, she has numerous weapons at her disposal. Laurie has been preparing for what she feels is Michael Myers’ inevitable return to finish what he started forty years earlier. 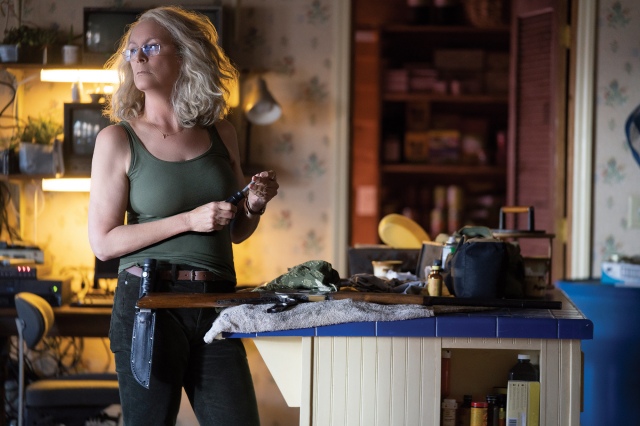 The way Laurie lives has put a strain on her relationship with her daughter Karen, played by Judy Greer  (13 going on 30).  While Karen was growing up, Laurie trained her daughter in self-defense, and how to use weapons; to Laurie’s way of thinking, if Karen likes her less because of it, she is willing to live with that price. The film, at its core, is about the long term effects trauma has, not only on the victim who has lived through a horrific ordeal, but those who are part of the victim’s life.

The way Laurie continues to live, despite Karen pleading with her to get help, has also impacted Laurie’s relationship with her granddaughter Allyson (Andi Matichak). Allyson, like Laurie’s character in the original, is a member of the National Honor Society, in school. Karen has not raised Allyson, at all, in the same manner, as she was brought up, therefore, Allyson is a normal well-adjusted teenager. She enjoys going out, and spending time with her boyfriend Cameron (Dylan Arnold), as well as her friends, Vicky (Virginia Gardner), Dave (Miles Robbins), and Oscar (Drew Scheid).

Laurie, as it turns out, has every reason to fear Michael Myers’ return. While he is being transported with a number of other patients, from one facility to another, he causes the bus he is on to crash. The incident is not shown on screen, but the aftermath of his actions are. The only person he leaves alive, at the sight of the bus crash, besides his fellow patients, is Dr. Sartain. The crash takes place the night before Halloween. Of course, once securing his freedom, he heads home to Haddonfield, to try and finish what he started decades earlier.

Once Michael arrives in Haddonfield, leaving dead bodies and chaos in his wake while in route there, he seeks out Laurie. As he searches for her, he is shown dispatching innocent victims with ease, while walking the streets that are full of trick-or-treaters and their parents, seemingly unnoticed by all; but that won’t last long. The police have been alerted to his escape from custody, as has Laurie, who hears about the bus crash on the news. From that moment forward, the film becomes a race against time, for both law enforcement, led by Will Patton’s character Officer Hawkins, and more importantly, the combined forces of the women of the Strode family, to put an end to Michael Myers, once and for all. 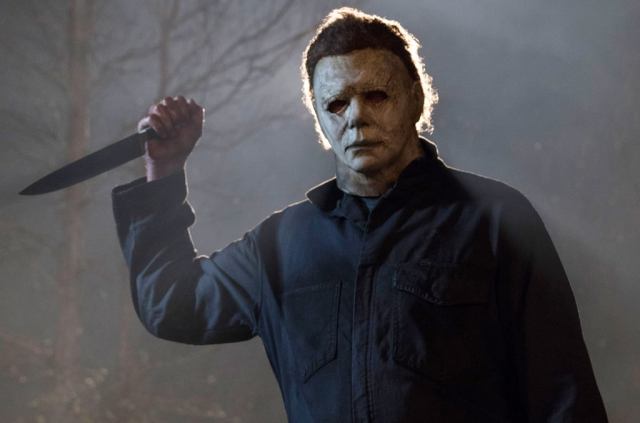 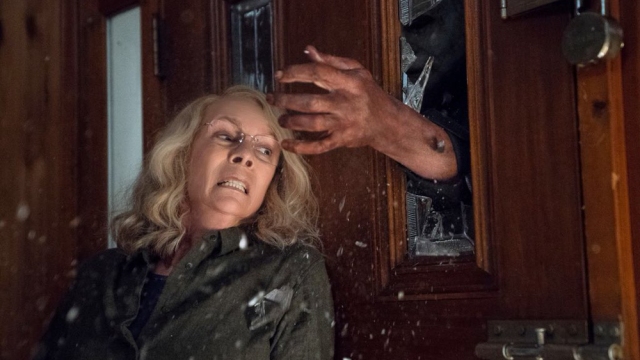 “Halloween” (2018) premiered at the Toronto International Film Festival on September 8, 2018. David Gorden Green (Joe) directed, and co-wrote the screenplay for the film with Danny McBride (Eastbound & Down) and Jeff Fradley (Vice Principals) based on characters, from the original movie, that were created by John Carpenter and Debra Hill (The Fog). In addition to Jamie Lee Curtis and Nick Castle, P.J. Soles (Carrie) is the only other cast member from the original to appear in the 2018 film. Soles plays a small role as a teacher. “Halloween” (2018), has become not only the biggest movie opening for the entire franchise, but the second biggest horror movie opening ever, as well as the biggest horror movie opening featuring a female lead.

“Halloween” (2018) respects the original, but deviates in a number of ways. The tension in both films is palpable, but the gore, and the brutality with which Michael Myers disposes of his victims, has been ratcheted up a great deal in the current film. The original was not bloody; this is not only bloody, but gory. There is humor in the film, which helps to alleviate the tension, but the Michael Myers shown in this film, is like none other that has come before him. Does Michael Myers live? Will he once again return to inflict death and mayhem on the residents of Haddonfield? Only time will tell, but as of the writing of this post, a sequel is rumored to be in the works. 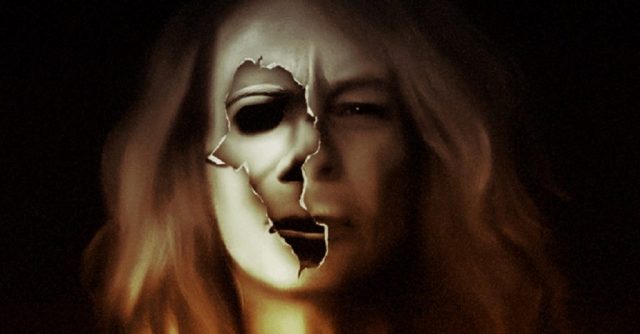