In Detroit, Michigan, on the afternoon of February 25, 2005, Kerri Rawson placed a call to her husband Darian’s office. The couple were recently married, as well as new residents of the state of Michigan, having moved to Detroit, after Darian was offered a job as a graphic designer. Rawson, twenty-six, at the time, was working as a substitute teacher, and had decided to not take a job for that day. The reason for her call wasn’t to check in on Darian to see how his day was going; no she was starting to get worried. As she spoke to Darian, she told him every time she looked out their bedroom window, a man, who was sitting in a beat up looking car, was focusing his undivided attention on their apartment. Unbeknownst to either Kerri or Darian, at the time, the man, that perhaps both of them thought was a creepy, peeping tom, was actually an FBI agent. He was there to swab Rawson’s cheek to collect DNA evidence from her, or so she would learn, once he knocked on the door and showed her his badge.

Rawson hadn’t done anything wrong, but her father, Dennis Rader, soon to be unmasked to the world as the infamous BTK killer (Bind, Torture, Kill), had been arrested earlier that afternoon; he would later be charged with 10 counts of first degree murder. Rader committed his first murders on January 15, 1974, when he strangled to death four members of the Otero family: husband and wife Joseph and Julie, and two of their five children, daughter Josephine, and son Joseph Jr. BTK’s last victim, at least as far as law enforcement was concerned, was Dolores Davis who was killed on January 19, 1991. Rader strangled Davis in her home, placed her body in the trunk of his car, and then drove her body to nearby Sedgwick County, where he dumped it under a bridge.  (As an aside: The FBI already had a sample of Kerri Rawson’s DNA. While attending Kansas State University, Rawson had a procedure done at the university’s health clinic. The FBI matched her DNA from her procedure to DNA Rader had left at the Otero crime scene, and it was a near perfect match; the second taking of DNA was to make absolutely sure they had BTK in custody, and could link him to at least four of the murders). 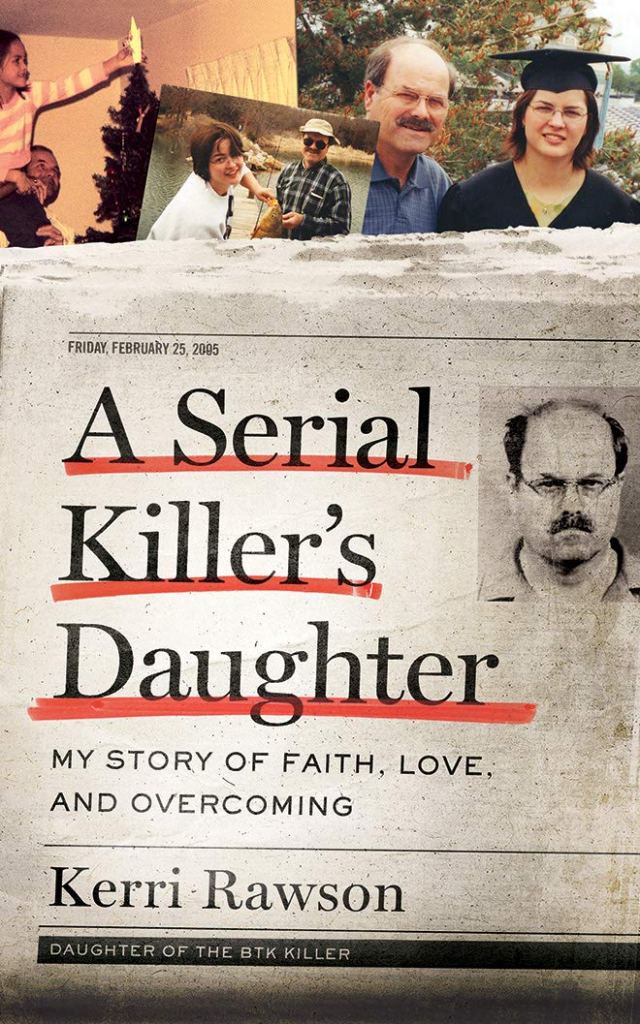 Rawson, her brother Brian, who was in the Navy at the time, and Rader’s wife Paula, who he had been married to for thirty-four years, couldn’t fathom that their, seemingly attentive and loving, father and husband, had committed the acts of depravity, he was being accused of.  The same crimes that had struck fear in the hearts and minds of the residents of Wichita Kansas, especially during the 1970s and 1980s. In addition to Rader’s immediate family, his extended family and friends were unwilling, at first, to accept the fact that the man they knew, who worked as a compliance officer for the Wichita suburb of Park City, was a Boy Scout Troop leader, and an active member in the Christ Lutheran Church, where he served as president of the church council, could be responsible for any of the crimes he was being charged with.

According to Rawson, she remembered thinking at the time, that this was the Dennis Rader who had openly wept over his father’s body, after the man passed away, as Rader had been sitting vigil by his hospital bed. An example of the type of questions Rawson would ask herself, which are presented throughout the book is as follows: How could her father cry over the death of his loved one, but think nothing of the pain and heartache he inflicted on the family members of his victims? For all the good Rader might have done for his family, and for his community – and who knows how much of that was for the sake of appearance – in a short time, his family and friend’s collective defense of him came to an end. Faced with DNA evidence, as well as other incriminating evidence that Rader himself had mailed to the police, in a game of cat and mouse, which he thought he was too clever to get caught in, he began confessing to his crimes, which included the murder of eight adults and two children.

I’ve read a number of true crime books, and what I admired about Rawson’s writing, is that it is presented almost like she’s having a conversation with a friend or family member. She didn’t sensationalize any aspect of the book to help sales, or make her father look like an even more despicable human being than he already is. She reported on her time with her father as accurately as she could remember. In fact, those who were hoping to read a book full of stories of Rader being an abusive husband or father are going to be sorely disappointed. For example, she writes about his love of camping, and one of the adventurous trips they took together when she was younger, however, like with everything else, she immediately follows her reminiscences of pleasant memories with questions pertaining to how her father could be two such diverse people – one loving and caring – the other vile and depraved.

Throughout the book, Rawson describes not only the media throng that followed her and her family members, everywhere they went, and the lengths they would have to go to get rid of the press, but the intense, inner turmoil, her father’s crimes had inflicted on her mental and physical well-being. Rawson describes suffering through anxiety, extreme bouts of depression, as well as post traumatic stress disorder, all while trying to reach a place, where she could find it in her heart, to forgive her father for his crimes. Rawson credits her family members for helping to see her through the darkness. She also sought out the help of a professional therapist, and took, and continues to take, comfort from active participation in her church.

The book “A Serial Killer’s Daughter,” was published on January 29, 2019 by Thomas Nelson. In addition to photographs that were taken prior to Rader’s imprisonment, included in the book are letters written between Rawson and Rader, since his incarceration. Rader is currently serving life in prison, without the possibility of parole, at the El Dorado Correctional Facility in Prospect Township in Butler County, Kansas. The only reason Rader is not on death row is because his last known murder was committed prior to 1994, when Kansas reinstated the death penalty as state law. Rawson and Rader still communicate however, she doesn’t want him, or anyone else he is housed with at the prison getting a hold of her address or phone number, so all mail from Rader is filtered through a third party. As of the writing of this post, Rawson has never visited her father in prison, and has no plans to do so in the future.

“A Serial Killer’s Daughter” was an interesting book. The reason I wanted to read it, was that it didn’t deal specifically with the crimes Dennis Rader committed as BTK. I  probably would not have  read it if that had been the subject matter, because there are already numerous books, magazine articles, TV specials and films, about him and his crimes. Instead, what makes the book unique, is that it is written from the perspective of his daughter, who loved and cherished her father, a man she thought she knew prior to February of 2005, but because of his lifetime of deception, never knew at all.

I was born in Smithtown, New York, and grew up, worked, and lived in various areas of Long Island before moving to Boca Raton, Florida where I now make my home. In addition to being an aspiring writer, I am also an English teacher. I have a Bachelor of Arts in English and a Master’s Degree in Education, both from Adelphi University in Garden City, New York. In my spare time you will find me engrossed in books, watching movies, socializing with friends, or just staying active.
View all posts by robbinsrealm →
This entry was posted in Literature and tagged A Serial Killer's Daughter, BTK, Dennis Rader, Kerri Rawson. Bookmark the permalink.

9 Responses to “A Serial Killer’s Daughter by Kerri Rawson”