“Crawl – An Homage to Creature Features of Old”

Posted on August 7, 2019 by robbinsrealm

The plot for the film “Crawl” is rather straightforward. At its core, it is an entertaining, tension filled, creature feature, that is the perfect summer movie for those seeking some good jump scares. There are no life lessons embedded in its 87 minute runtime. The filmmakers aren’t trying to advance an agenda, or foster a point-of-view on any current political or social issue, and that was more than fine with me; I was merely watching the movie for its entertainment value. Instead, the film concerns itself with the age old story of survival against seemingly insurmountable odds.

Haley (Kaya Scodelario) is a college student, attending Florida State University, on an athletic scholarship for swimming. After practice concludes for the day, she receives a phone call from her sister, Beth (Morfydd Clark). Beth is worried because the entire state of Florida has been placed under a hurricane evacuation warning. Speculation is, that the state could be hit with a Category 5 hurricane, which would have the most impact, because 5 is the deadliest category, and if it did hit Florida, it would cause unimaginable devastation. The reason for Beth’s concern, is that she has not been able to get in touch with their father, Dave, played by Emmy winner Barry Pepper (The Kennedys). Haley assures Beth that she’ll check up on their father. In addition to being her dad, he is also her former swim coach, but he is also someone she’s been estranged from for quite some time.

Haley drives to his apartment, but Dave is not there. Haley figures that the only other place he could be is her childhood home, which has recently been put up for sale on the real estate market. Haley, determined to get her father to safety, despite their less than stellar relationship, ignores the oncoming warnings on the news of the destructive weather, and continues onward. She even circumvents a police roadblock, as she heads in the opposite direction of where everyone else is fleeing in terror.

When Haley arrives, she finds her father, in the crawl space, underneath the house. He had gone down into the crawl space to fix something, and in the process, got a lot more than he bargained for. Dave is not only unconscious, but has been badly bitten by an alligator. Haley’s discovery of Dave, in that condition, is merely the beginning of their problems. Dragging Dave behind a set of pipes, that the gator can’t navigate through, is the only thing, that momentarily, will keep them safe. Additionally, Haley soon learns, after she attempts to get help, that there is more than one gator already present in the crawl space. The flood waters steadily rise, and the overflow pipe, which Dave had opened and had been working on, which runs directly into the crawlspace, makes an easy entry point for more gators to gain access to the house. 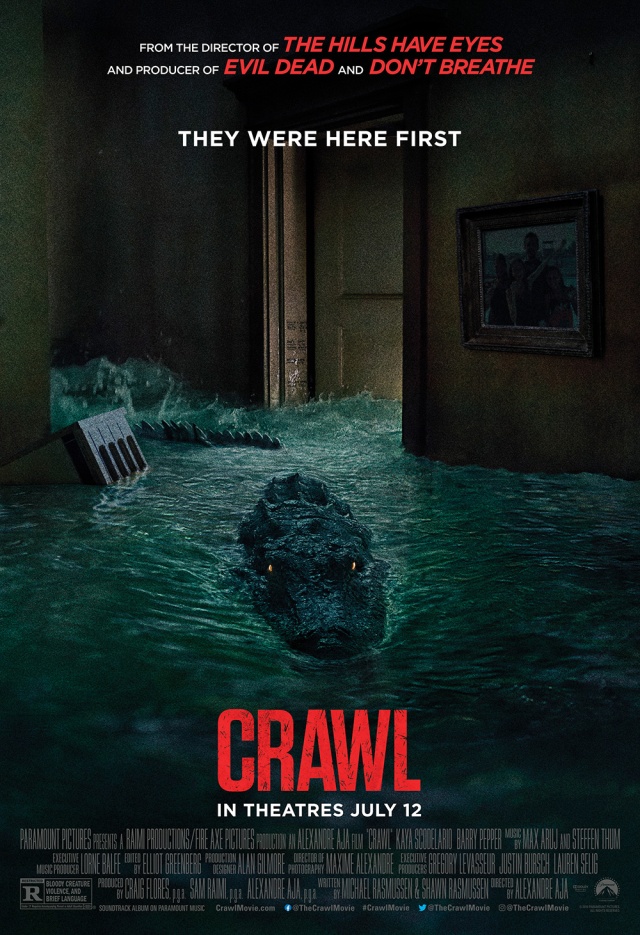 In order to survive, Haley will have to use all her wits, put aside her differences with her father, and use her athleticism, if she’s to have any sort of chance of saving herself, Dave, and the poor family dog, Sugar. Conversely, even if Haley is successful in getting the three of them to safety, out of harm’s way of the snapping grasps of the hungry reptiles, mother nature’s fury is still bearing down on Florida at an alarming rate.

What lengths will Haley go to in order to get herself, Dave, and Sugar to safety? Can Haley and Dave put their differences aside, and work together to figure a way out of the nightmarish predicament? Who, if anyone, will live? Who, if anyone, will die? Can help reach the stranded family in enough time to save them? Is the arrival of help even possible under the circumstances?

“Crawl” premiered on July 10, 2019 in Indonesia. Co-written for the screen by brothers Michael and Shawn Rasmussen, the film is parts action – drama – horror and thriller. The movie was directed by Alexandre Aja (High Tension). Fans of the director’s other films, might be let down if they were craving to see a good deal of gore on the screen. Aja is more restrained and audience friendly with this film than he has been in his previous work. In “Crawl,” he opts to keep the focus on the story of survival, while simultaneously building the suspense and ratcheting up the tension. 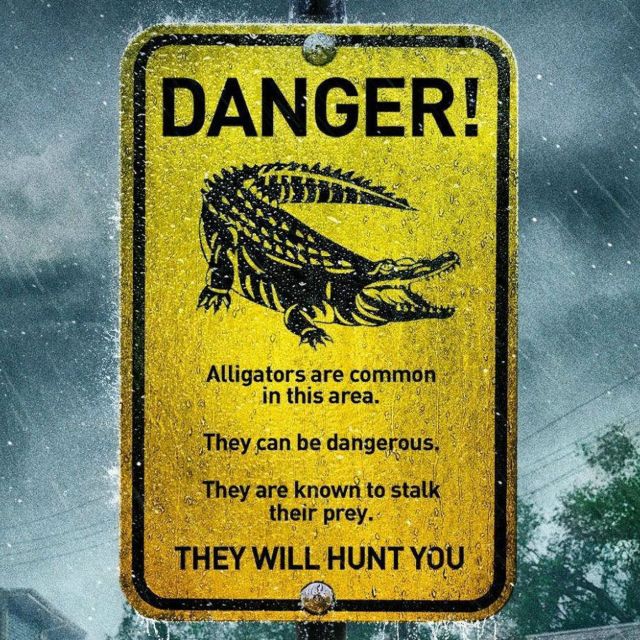 I enjoyed “Crawl” because it was exactly what I expected it to be based upon its trailers and the few things I had read about it prior to its release. I wanted a well paced, efficient film, that packed a number of thrills, and it didn’t disappoint. Furthermore, it kept me guessing as to not only where the next gator attack would come from, but if the humans, whom I of course wanted to see survive the impending doom, would actually be able to do so.

I was born in Smithtown, New York, and grew up, worked, and lived in various areas of Long Island before moving to Boca Raton, Florida where I now make my home. In addition to being an aspiring writer, I am also an English teacher. I have a Bachelor of Arts in English and a Master’s Degree in Education, both from Adelphi University in Garden City, New York. In my spare time you will find me engrossed in books, watching movies, socializing with friends, or just staying active.
View all posts by robbinsrealm →
This entry was posted in Movies and tagged Alexandre Aja, Barry Pepper, Crawl, Kaya Scodelario, Michael Rasmussen, Morfydd Clark, Shawn Rasmussen. Bookmark the permalink.

5 Responses to “Crawl – An Homage to Creature Features of Old”