A child having an imaginary friend is one thing, but for it to be the supreme leader of Nazi Germany’s Third Reich, Adolf Hitler, that is something else entirely. Of course, as with most anything, the context, in which this is taking place, plays an important role as to the why. Jojo Betzler portrayed by Golden Globe nominee Roman Griffin Davis, in his feature film debut, is a ten year old boy residing in Nazi Germany. When it gets right down to it, he’s a good child, but, like all children of German ethnicity of the time period, he’s been programmed since birth to despise everything that isn’t approved by the Reich. His bedroom walls are covered with Nazi propaganda posters; the way a child of today might cover their walls with posters of athletes and bands they love. In Jojo’s mind, the Nazis are the good guys in the world, and Hitler isn’t viewed as a murderous dictator, but instead as a hero, as Jojo has been taught since birth. When times are tough for Jojo, and his real best friend Yorki (Archie Yates) isn’t around, he turns to his imaginary friend the Führer.

“Jojo Rabbit”  was written and directed by Oscar nominee Taika Waititi (Two Cars, One Night) based off of the 2004 novel “Caging Skies” by Christine Leunens. The film is heartfelt in places to be sure, as it emphasizes that compassion, love and a positive mindset are useful when combating those who have a slavish devotion to prejudice – in this instance, anti-Semitism. Waititi does a masterful job of balancing the comedic and dramatic aspects of the film. While the film is not about the Holocaust, the knowledge of what is happening to the Jews of Europe at the time, is not forgotten, thanks to several scenes that reinforce the utter hatred directed by the Nazis and their loyal followers at the Jews, however, as with most things in life, not all is bad. Jojo’s caring mother, Rosie, played by BAFTA winner Scarlett Johansson  (Lost in Translation), is a member of an anti-Nazi organization. Furthermore, she’s risking her life by hiding Elsa, portrayed by Thomasin McKenzie (Leave No Trace), in one of the walls, in a second floor bedroom of her house. Elsa’s an intelligent and tough minded, Jewish teenage girl, who still has the ability, despite all of the horrors she’s been through since the Nazi’s took over, to show compassion, even toward someone who is supposed to be her hated enemy. 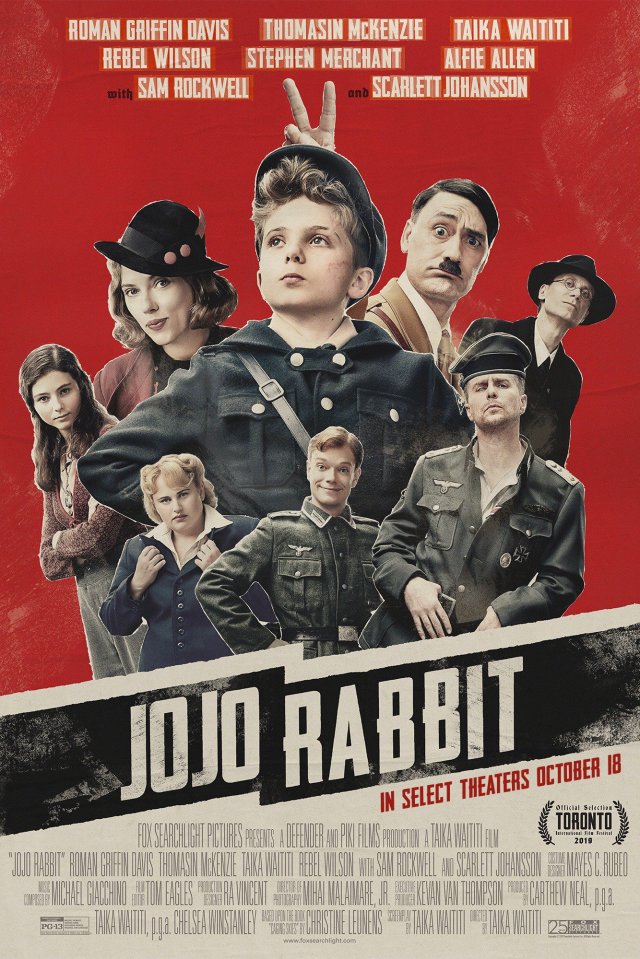 Jojo, comes to learn of Elsa’s presence in the house, and he has a serious decision to make. If he turns her over to the Gestapo, led by Deertz, played by three time BAFTA winner Stephen Merchant (Fighting with My Family), he’d be risking his mother being imprisoned, or worse, hung in the town square, as other perceived traitors have been. Another possibility, is letting Elsa’s whereabouts be known to his former Hitler Youth leader, Captain Klenzendorf, a role acted by Oscar winner Sam Rockwell (Three Billboards Outside Ebbing, Missouri). Jojo’s love for his mother wins out over his devotion to Germany. Instead of exposing Elsa to the authorities, he opts to study her instead. He wants to be involved in the fight, but thanks to a mishap with a grenade at the Hitler Youth training camp, he’s relegated to non-combat status. Jojo, begins to compile a book on Elsa, learning everything he can about her, in order to, at first, get information on the enemy, which he eventually plans to share with Captain Klenzendorf.

Problems being to arise for the young Jojo. The more he talks to Elsa, the more he realizes that they’re not that different. With the passing of each day, and the more they get to know one another, Jojo begins to question all of the horrid things he’s been taught since birth about the Jews. In addition, he begins to become more actively aware of the horrors that are taking place around him, and that the so called ‘master race’ he belongs to, doesn’t seem like such a utopian existence.

Waititi has been called out, in certain circles, for portraying Hitler, in the manner in which he did, but I think its unjust criticism. Firstly, taking a step away from the film for a moment, Waititi is Jewish. Secondly, while his portrayal of Hitler is one of the oddest, in a good way, that I’ve ever seen, he never forgets that he’s portraying someone who is the embodiment of evil. While his version of Hitler starts off as a comedic caricature of one of the most despised people who ever lived, as the film moves forward, Waititi’s portryal of Hitler becomes more hate filled, especially when it comes to Hitler’s vile filled anti-Jewish rhetoric.

Is Elsa able to hide in Rosie’s house undetected until the end of the war? Is she discovered by the Gestapo and shipped off to a concentration camp? What will the punishment be for Rosie if Elsa is discovered hiding inside her house? What would become of Jojo? All of those questions and more will be answered by the conclusion of the 108 minute film.

“Jojo Rabbit” premiered on September 8, 2019 at the Toronto International Film Festival, and since its premiere has garnered strong critical praise, including six Oscar nominations. In the hands of a less capable filmmaker, “Jojo Rabbit” could’ve wound up being a disaster, but Waititi was able to create just the right balance, so the film was neither too comedic for such a dark subject nor too dark for a film that needed moments of comic relief to break up the tension. There are just the right number of jokes, some wonderful one-liners, sight gags, and as I stated earlier in this post, the film’s heart is the right place. I didn’t think for one moment that the Nazis or Hitler were being glorified, instead, the viewer is taken on a funny, at times, but no less emotionally impactful journey by its two young leads, who play very well off of one another. The film attempts to show the horror of war from a child’s point of view, and succeeds.

I was born in Smithtown, New York, and grew up, worked, and lived in various areas of Long Island before moving to Boca Raton, Florida where I now make my home. In addition to being an aspiring writer, I am also an English teacher. I have a Bachelor of Arts in English and a Master’s Degree in Education, both from Adelphi University in Garden City, New York. In my spare time you will find me engrossed in books, watching movies, socializing with friends, or just staying active.
View all posts by robbinsrealm →
This entry was posted in Movies and tagged Archie Yates, Caging Skies, Christine Leunens, Jojo Rabbit, Roman Griffin Davis, Sam Rockwell, Scarlett Johansson, Stephen Merchant, Taika Waititi, Thomasin McKenzie. Bookmark the permalink.