Netflix’s four-part miniseries, “Unorthodox,” is partially based on the 2012, New York Times bestselling memoir “Unorthodox: The Scandalous Rejection of My Hasidic Roots,” written by Deborah Feldman. The compelling story, which was filmed in Yiddish and English, centers on Esther Shapiro (Shira Hass), nicknamed Esty, who at the start of the series, resides in Williamsburg, Brooklyn. Esty feels trapped. She’s a nineteen year old girl, who is in a seemingly loveless marriage, that was arranged for her and she is also pregnant. In the opening scene, Esty exits her apartment building, where she lives, leaving everything she owns behind, except for what she can hide in her skirt. The religious reasons for this are imparted to the viewer.

Esty, at first, hoped her marriage to Yanky (Amit Rahav) would bring a positive change to her life, but that hasn’t happened. She is desperate to get away from the restrictive Satmar Hasidic community where she comes from, where women, by and large, are treated like second class citizens. The majority of them, however, willingly go along with the inordinate amount of rules that they must follow, and happily do so, but not Esty. She needs to break free from her metaphorical constraints and the one place she can run to is Berlin, Germany. The reason for the location, is that her mother, Leah (Alex Reid), who also separated herself from the religious community years earlier, lets Esty know that she is entitled to German citizenship. Prior to the Nazis taking power, and implementing oppressive laws against the Jews, Esther’s grandparents had been German citizens. Esty’s piano teacher, Vivian (Laura Becker) helps facilitate her escape, by getting her a passport. The events that helped shape Esty’s decision to flee to Berlin, are revealed to the viewer via flashbacks throughout the series.

Once in Berlin, Esty meets, and makes friends with, a group of students who attend a prestigious musical conservatory. Esty, who has always had a love of music, makes the decision to audition to become a member of the conservatory. Yanky and his cousin Moishe (Jeff Wilbusch), however, have different plans for her, as they have been tasked by the rabbi (Eli Rosen) to find Esty and bring her back home. Yanky and Moishe, arrive in Berlin, and hour by hour, are closing in on Esty. As the tension builds, and as the two get closer to possibly confronting her, the story effortlessly shifts back and forth between past and present. Shira Hass is able to convey a wide range of emotions that let a viewer know exactly how Esty’s feeling at any given moment. 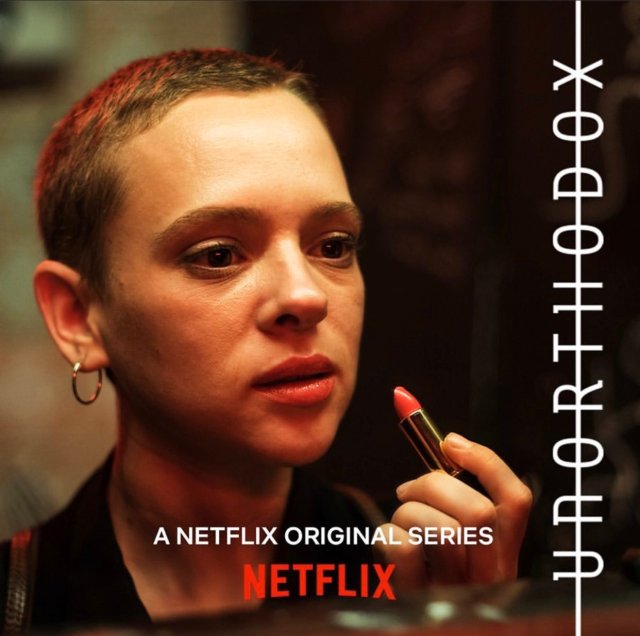 “Unorthodox” is a glimpse into a world, that for the most part, is not seen by outsiders, not even non-orthodox members of the Jewish faith. The viewer gets to see the closed off community through Esty’s perspective. For example, the sheer liberating power, Esty experiences, when in the first episode, she takes off her sheitel, which is a wig worn by female members of her orthodox community. She doesn’t care, that her real hair, which has been shaved down, is exposed, Esty, in that action, is taking one more step toward the life she wants to live, one where she determines the decisions that will shape her future.

I watched “Unorthodox” in two sittings. I knew, next to nothing, about the world that was showcased to the viewer. Since I am originally from New York, I have seen members of the Hasidic community walking around, both men and women, but with the exception of one girl I met, when I was a teenager, who like Esty, had a rebellious steak in her, I had little to no interaction with them. For those interested in learning about religion, especially one, in regard to the ultra orthodox Jewish faith, that doesn’t have a habit of letting the outside world in, “Unorthodox” offers the viewer a fascinating insight, and, for a short duration of time, became for me, at least, binge worthy television.

I was born in Smithtown, New York, and grew up, worked, and lived in various areas of Long Island before moving to Boca Raton, Florida where I now make my home. In addition to being an aspiring writer, I am also an English teacher. I have a Bachelor of Arts in English and a Master’s Degree in Education, both from Adelphi University in Garden City, New York. In my spare time you will find me engrossed in books, watching movies, socializing with friends, or just staying active.
View all posts by robbinsrealm →
This entry was posted in TV Series and tagged ", Alex Reid, Alexa Karolinski, Amit Rahav, Anna Winger, Antonio Gambale, Daniel Hendler, Deborah Feldman, Eli Rosen, Jeff Wilbusch, Laura Becker, Maria Schrader, Shira Hass, Unorthodox, Unorthodox: The Scandalous Rejection of My Hasidic Roots. Bookmark the permalink.