“Death Ride To Osaka” centers on Carol Heath, who is portrayed by Golden Globe winner and Oscar nominee Jennifer Jason Leigh (The Hateful Eight). She’s a waitress who lives in Los Angeles with her cat. Carol is lonely. Her boyfriend Don (Thomas Byrd) has opted to go into the Air Force and leave her; a decision he will wind up regretting. In addition to her love of Don, Carol is an aspiring singer and songwriter who is waiting for her big break.

Every day after her shift at the diner, Carol checks the newspapers for opportunities to audition to sing. One day, she reads an advertisement seeking singers to come and perform in Japan. Carol meets with Cavanaugh (Phillip Charles MacKenzie), who placed the add on behalf of the White Orchid club in Japan. Carol meets with both Cavanaugh and the club’s representative Shiro (Richard Narita). The two are impressed by Carol’s vocal talents, as well as her attractive looks, and agree to hire her. She will be paid $400 a week for an eight week job, as well as be provided airfare. Carol eagerly signs the contract, but she also naively signs a contract written in Japanese, which Cavanaugh assures her says the same thing as the contract written in English.

Carol arrives in Japan and meets with the Orchid’s owners, Mori, played by Oscar nominee Mako (The Sand Pebbles) and Madame Mori (Carolyn Seymour). At first everything goes according to plan. Carol sings and is overjoyed at the positive reception she receives from her performance. A short time later, however, she finds out, that performing on stage is only one of her job responsibilities. Carol is expected to please the wealthy male clientele that populate the club and want to pay her for more than to hear her voice. Making matters worse, the club is owned by Hatanaka (Soon-Tek Oh). He is the head of a Yakuza crime family. Further complicating matters is that Carol’s passport has been taken from her and the money she is earning doesn’t add up to what she thought it would be.

Carol refuses to prostitute herself, which is dangerous. There have been other women who have also, understandably so, felt like Carol, who only wanted to perform on stage for the customers. Those women who have refused  have disappeared. The only glimmer of hope Carol has, is that Don, realizing he doesn’t want to be without her, is on his way to Japan to let her know how he feels. Will he make it there in time before something terrible happens to Carol?

When “Death Ride To Osaka” originally premiered on NBC television, it was titled “Girls of the White Orchid.” The television movie was directed by five time Emmy nominee Jonathan Kaplan (ER) and written by Carole and Michael Raschella (Emergency!). Tom Allard (The Hardy Boys/Nancy Drew Mysteries), contributed to the writing of the teleplay, but was uncredited. The parts crime and drama movie, which is based on a true story, premiered on November 28, 1983. 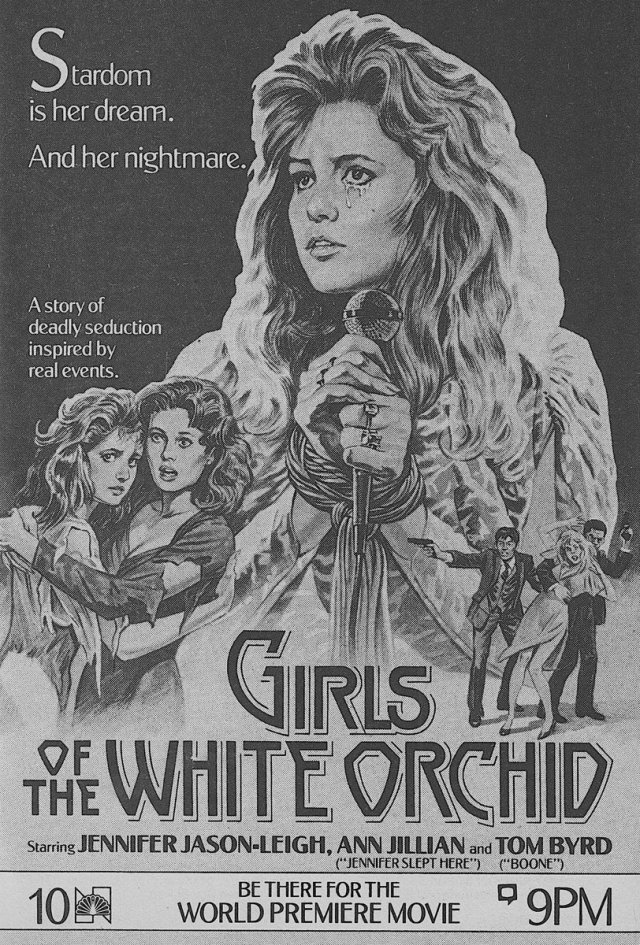 Jennifer Jason Leigh is an actress I’ve always liked. She gives her all with what she had to work with. The cast as a whole, for that matter, all did their best with the material. The problem is that the television movie is just okay. The plot of the movie, especially with the inclusion of a Yakuza crime family, could’ve led to some excitement, but never really did. Jennifer Jason Leigh sings three times during the film, and while one of the songs is a fun 80s kind of dance song, the other song she sings twice is ear grating; not because she can’t sing, but because the song, in my opinion, is awful. For Jennifer Jason Leigh fans, like myself, who’ve seen the actress in almost everything she’s done and want to check this movie off their list, I say give it a watch. For the rest of you, I’d say skip this one, but if you’re curious, it’s available to watch on Amazon Prime.

I was born in Smithtown, New York, and grew up, worked, and lived in various areas of Long Island before moving to Boca Raton, Florida where I now make my home. In addition to being an aspiring writer, I am also an English teacher. I have a Bachelor of Arts in English and a Master’s Degree in Education, both from Adelphi University in Garden City, New York. In my spare time you will find me engrossed in books, watching movies, socializing with friends, or just staying active.
View all posts by robbinsrealm →
This entry was posted in Movies and tagged Carole and Michael Raschella, Carolyn Seymour, Death Ride To Osaka (1983), Girls of the White Orchid, Jennifer Jason Leigh, Jonathan Kaplan, Mako, Phillip Charles MacKenzie, Richard Narita, Soon-Tek Oh, Thomas Byrd, Tom Allard. Bookmark the permalink.