“Smoke and Mirrors: The Story of Tom Savini”

Posted on October 1, 2020 by robbinsrealm

He’s never won a BAFTA, Golden Globe or Oscar, but Tom Savini’s contributions to the entertainment world, especially the horror genre are unparalleled. Savini has been an actor, director, stunt coordinator, make up artist and he is a special effects master.” “Smoke and Mirrors: The Story of Tom Savini” is a comprehensive documentary that chronicles not only Savini’s legendary career, but his entire life.

The documentary begins with his childhood in Pittsburgh, Pennsylvania. He was the youngest of five children. The film delves into his life with his parents and siblings. When Savini saw the 1957 Lon Chaney biography “Man of a Thousand Faces,” which starred Oscar winners James Cagney (Yankee Doodle Dandy) and Dorothy Malone (Written on the Wind), he was in awe. Savini credits the film with being the catalyst for his wanting to have a career as a makeup and special effects artist. His plans would be put on hold because, amongst other things that are discussed during the film, he was drafted to serve in the Vietnam war as a combat photographer, but that didn’t spare him from his turn on guard duty. (As an aside: “Man of a Thousand Faces” was directed by Joseph Pervney who, as more than casual fans of the original Star Trek series know, directed the episode “The City on the Edge of Forever,“ which aired on April 6, 1967.  The episode is considered among the best, and often times hailed as the best episode of the original series. Pervney won a Hugo Award for his direction of the episode.  The Hugo Award is an annual award presented at the World Science Fiction Convention and is given for the best science fiction or fantasy works and achievements of the previous year).

Shown throughout the documentary’s 91 minute duration are clips from the various films Savini has worked on. For example, his special effects  work on the George Romero zombie films and his creation of the  look of the original Friday the 13th’s Jason Voorhees. He also discusses the challenges, as well as the things that prevented him from making his directorial remake of the 1968 horror classic “Night of the Living Dead,” the film he wanted it to be. Savini’s remake was released in October of 1990 and starred Tony Todd (Candyman), Patricia Tallman (Babylon 5), and Tom Towles (The Borrower). The specifics of what happened, I don’t want to get into, so as not to ruin it for those of you who want to watch the documentary. 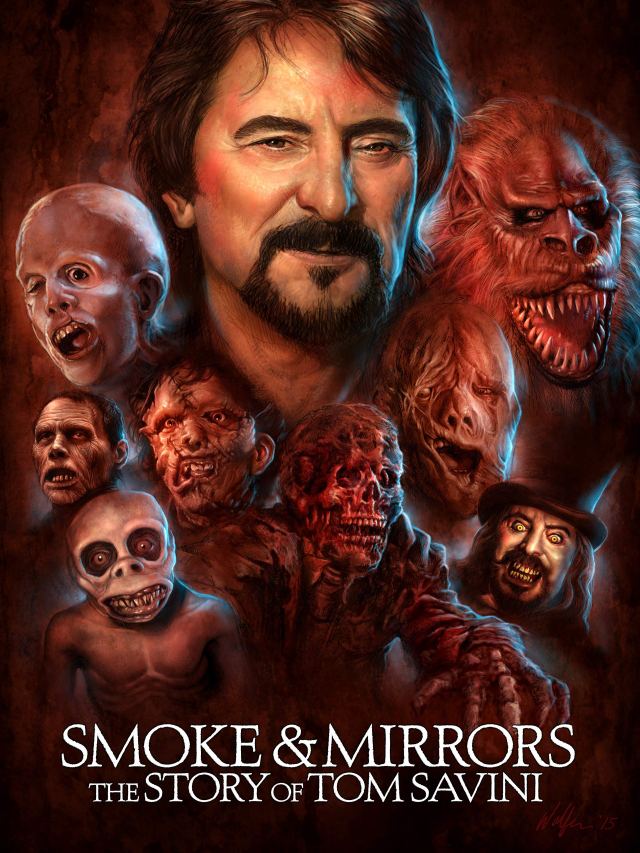 Interviewed during the film are friends and colleagues that include, but are not limited to: BAFTA and four time Emmy winner Greg Nicotero (The Walking Dead); two time Grammy nominee and Rock and Roll Hall of Fame inductee Alice Cooper; George Romero (Dawn of the Dead); and Robert Rodriguez (From Dusk Till Dawn). Furthermore, there is archival footage, as well as stills of personal photographs that are shown throughout the film.

“Smoke and Mirrors: The Story of Tom Savini” was directed by Jason Baker (Nightmare City). The film premiered at the Sitges Film Festival on October 16, 2015. The film shows a different side of Savini, that as he states, people either don’t know, or wouldn’t expect from someone who does the kind of work that he’s done during his career. As revealed to the viewer, Savini is a caring and considerate person. This is the sort of film that horror fans worldwide should love, but can also, in my opinion, be appreciated by film lovers in general.

I was born in Smithtown, New York, and grew up, worked, and lived in various areas of Long Island before moving to Boca Raton, Florida where I now make my home. In addition to being an aspiring writer, I am also an English teacher. I have a Bachelor of Arts in English and a Master’s Degree in Education, both from Adelphi University in Garden City, New York. In my spare time you will find me engrossed in books, watching movies, socializing with friends, or just staying active.
View all posts by robbinsrealm →
This entry was posted in Movies and tagged Alice Cooper, George Romero, Greg Nicotero, Jason Baker, Robert Rodriguez, Smoke and Mirrors: The Story of Tom Savini, Tom Savini. Bookmark the permalink.

2 Responses to “Smoke and Mirrors: The Story of Tom Savini”