“Lemora: A Child’s Tale of the Supernatural” takes place in the American south, during the prohibition era, (1920-1933). At the outset of the film the protagonist, virtuous teenager, Lila Lee, portrayed by Cheryl “Rainbeaux” Smith (Melvin and Howard), is for all intents and purposes, orphaned. Her gangster father, Alvin Lee (William Whitton), having caught Lila’s mother in bed with another man, shoots both of them, and flees the scene before law enforcement arrives. Having no other family to live with, Lila is taken in by Reverend Mueller, who preaches to an all female congregation. The reason for there being no male membership in the church is never explained. The reverend is played by the film’s director, Richard Blackburn (Eating Raoul), who co-wrote the screenplay for the movie with Robert Fern. 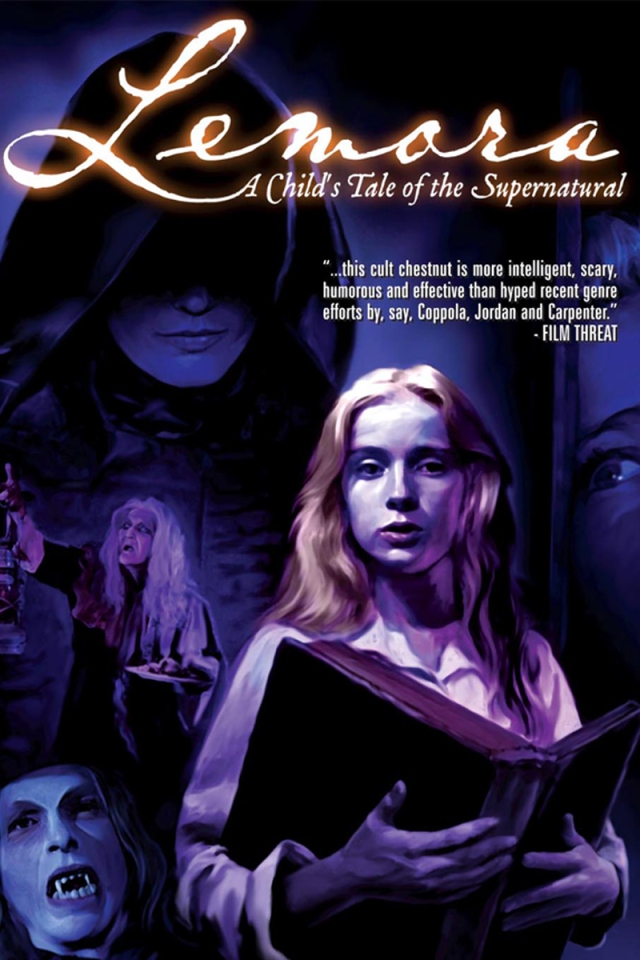 Reverend Mueller is complementary toward Lila, allowing her to use her talents as a singer for the church, referring to her as the ‘singing angel,’ but at the same time, he is fending off his lustful urges to be more than just a father figure to the girl. Lila’s living situation with the reverend doesn’t last long. She receives a letter from an enigmatic woman, a vampire, named Lemora (Lesley Gilb), who writes that she knows where Lila’s father is, and she can reunite them. According to the letter, her father is dying, and he wants to see her to ask for her forgiveness for any wrong he has done to her. Lila must journey to the town of Astaroth, but if she speaks of the letter to anyone, or brings anyone with her, she will never see her father again. Lemora encloses traveling instructions with the letter. (As an aside: Cheryl “Rainbeaux” Smith, starred in Oscar winner, Jonathan Demme’s (Silence of the Lambs) directorial debut film “Caged Heat”).

Lila sneaks away from the reverend’s house one evening, although she does leave him a goodbye note. When the reverend discovers Lila has left, he doesn’t wait long before he goes in search of her, attempting to re-trace her steps in order to locate her. In the instructions sent by Lemora, Lila is told to board a bus that will take her to the town in which she resides. While in route, to take the bus, Lila passes through a part of her town, populated by unsavory individuals; even the ticket seller, (Steve Johnson) gives her inappropriate looks, while at the same time offering her chocolates, before Lila boards the bus. The driver (Hy Pyke), who acts agitated, and a bit off, navigates the vehicle through back country roads that border salt marshes and swamp land. Living in those areas are creatures with ghoulish appearances, that make guttural and beastly sounds. A short time afterward, the bus stalls, and the driver gets out, carrying a shotgun, to see if he can fix the problem.

While outside, the driver is attacked, and he can’t make it back inside the bus to safety. He implores Lila to pull the brake, which she does; as the bus descends down the hill, Lila is trying to turn the wheel and steer it in the proper direction, but the bus soon crashes. Once more, Lila is confronted by the creatures, while using an open window to climb out of the bus. This time, however, she is saved by another monster of the dark, one sporting fangs, who stakes the creature that is trying to kill Lila. After Lila screams, she faints, but the viewer knows Lila is being carried back to safety. Lemora, who throughout the film is always dressed in black satin, can be heard saying “burn those things after you carry her to the stone house.”  The viewer will come to learn that there are two types of vampires that populate Blackburn’s cinematic landscape – those who are more human in appearance, who serve Lemora – and those that have become like feral animals, who live out in the swamps feeding on whatever comes their way. The two sides are at war with one another.

Later that same evening, Lila wakes up on a bed inside the stone house which contains one barred window that she can see out of. An old, cackling woman (Maxine Ballantyne), brings her food, and circles around Lila singing an eerie sounding song. In addition, while stuck inside the stone house, Lila is taunted by a group of children who are part of Lemora’s brood.  The next time the woman returns to bring Lila food, she makes her escape from the building. Once the woman informs Lemora that Lila has escaped, Lila doesn’t get far before she encounters the head vampire.

Will Lila discover in time what Lemora is? If she does, can she escape her grasp? Does Reverend Mueller rescue Lila? What is Lemora’s purpose for bringing Lila into her life? Will Lila get an opportunity to see her father one last time? Is Alvin Lee under Leomora’s care? What purpose do the children in Lemora’s brood serve? Has the entire experience been the product of a fevered dream, had by a teenager, who can’t cope with the fact that both her parents are no longer with her? This is one of those films, where not every question will be answered during its 80 minute runtime. Blackburn leaves it up to the viewer to decide if what they’ve just watched is real or Lila’s fantasy. (As an aside: There are two other versions of the film, one was released in 2004 on DVD, and contains five additional minutes of footage, as well as commentary provided by Richard Blackburn and Lesley Gilb. The other one was an uncut version which had a runtime of 113 minutes, but was never shown theatrically, and is not available on DVD).

In 1997, at The Quentin Tarantino Film Festival, that was held at the Alamo Drafthouse Cinema, in Austin, Texas, before a screening of the film “Revenge of the Cheerleaders,” a movie that Cheryl “Rainbeaux” Smith had starred in, Tarantino said the following about the actress:

“She is a very unique presence in movies. She truly has, without trying whatsoever, a Marilyn Monroe quality. She doesn’t look like Marilyn Monroe at all, she just has that kind of vacantness. She’s not so much acting as she is existing. Imagine Marilyn Monroe as kind of a ’70s hippie junky then you kind of have Rainbeaux Smith.”

In addition to being an actress, Smith was also, for a time, a member of the all female rock band “The Runaways,” which featured musicians, Joan Jett and Lita Ford, as members of its lineup. Unfortunately, Smith got caught up in a hard partying lifestyle, and became addicted to heroin; she would serve two terms in prison. On October 25, 2002, Smith died at the age of 47, from complications after she contracted hepatitis. Smith is survived by her son, Justin, who she gave birth to on October 2, 1974.

The atmospheric and interesting film, had a limited release in theaters on April 30, 1973. The film was shot in one month, and made on a low budget. Richard Blackburn has stated in interviews, that there are a number of things he would have done differently, if he had been able to get better financing for the film, and additional time to make it. The genre of the film is listed as horror, but more often than not, things are implied in the film, as opposed to shown. There is little in the way of gore, and while there is subtle eroticism, again it is suggested more than displayed.  The movie will not be for everyone, I can state that with certainty. Those of you interested in watching a dreamlike film, that is more adult fairy tale than horror movie, as of the writing of this post, can view the film on youtube.com or purchase the DVD on amazon.com.

I was born in Smithtown, New York, and grew up, worked, and lived in various areas of Long Island before moving to Boca Raton, Florida where I now make my home. In addition to being an aspiring writer, I am also an English teacher. I have a Bachelor of Arts in English and a Master’s Degree in Education, both from Adelphi University in Garden City, New York. In my spare time you will find me engrossed in books, watching movies, socializing with friends, or just staying active.
View all posts by robbinsrealm →
This entry was posted in Movies and tagged Cheryl "Rainbeaux" Smith, Hy Pyke, Jonathan Demme, Lemora: A Child's Tale of the Supernatural, Lesley Gilb, Maxine Ballantyne, Quentin Tarantino, Richard Blackburn, Robert Fern, Steve Johnson, The Runaways, William Whitton. Bookmark the permalink.