Posted on October 4, 2015 by robbinsrealm

“When we were making these movies, the general feeling was they would play the theaters and then they would go into syndication and then they’d end up as the midnight movie and that would be the end of it.”
Joe Dante

Karen White, portrayed by Dee Wallace (Cujo), is a television news, anchorwoman, for KDHB television. At the beginning of the film, she is out on an assignment, in a seedy part of Los Angeles, working as a part of a sting operation, in conjunction with law enforcement. Karen is headed to meet serial killer, Eddie Quist, acted by Robert Picardo (Star Trek: Voyager). He has been communicating with Karen, and will only give his story, and his reasons for killing, to her. Quist, the viewer will learn, is more than your average psycho. He has arranged to meet Karen in a peep show booth of an adult video store. Once inside the booth, Eddie, who is already there, lets Karen know that she is the only one who can understand him; additionally, he has something he wants to show her. While the obvious jokes can be made, given the location, what he wishes to share is neither sexual nor comedic; turning around to face Eddie, Karen screams. A rookie police officer, after hearing she is in distress, fires a series of bullets into the booth, and fortunately, only Quist is killed.

After the attack, Karen is haunted by nightmares, but can’t remember particular details of what exactly took place when she was inside the booth. Returning to work, too soon after the attack, when it is her turn to talk during a live broadcast, she freezes and remains mute. Her actions prompt the ire of the station manager, Fred Francis, played by Golden Globe winner, Kevin McCarthy (Invasion of the Body Snatchers). Francis will not have her return to live television, until she works out her issues from the traumatic experience she suffered interacting with Quist. In addition, Karen has no desire to be touched by her husband, Bill (Christopher Stone). Her friends and fellow colleagues, Terry (Belinda Balaski) and Chris (Dennis Dugan) want her to get away for a while. 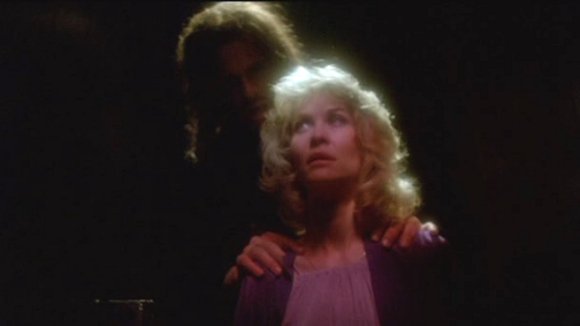 Karen and Bill, head off to a place known as ‘The Colony’ for some rest, as well as for her to get therapy. ‘The Colony,’ is a densely wooded retreat, that also has its own private beach, and is run by Patrick Macnee’s (The Avengers) character, Dr. George Waggner, who is a psychologist. At the start of the film, while Karen was on her way to meet Quist, the news station was interviewing Dr. Waggner. He was discussing the self-help book he wrote, which deals with human beings repressing the more feral side of their nature, and the stresses that can be caused by it.

The well executed film, “The Howling,” was directed by Joe Dante (Gremlins). The movie was written for the screen by two time, Academy Award nominee, John Sayles (Passion Fish). The source material was taken, although altered quite a bit, from the novel of the same name, written by Gary Brandner, which was published by Fawcett Publications in 1977. The movie, which has a runtime of 91 minutes, premiered at the Avoriaz Fantastic Film Festival in France, in January of 1981, where it won the Critics Award. Pino Donaggio (Carrie) provides a fantastic score for the film, which captures just the right balance of eeriness to compliment what is transpiring on the screen. Oscar winner, Rob Bottin (Total Recall), did an excellent job, within limited budgetary constraints, of producing high quality and imaginative special effects, especially for the time period. (As an aside: Jack Conrad (Country Blue) was originally hired to direct the film, but had trouble with the studio and left the project, also Terence H. Winkless (Mighty Morphin Power Rangers) was working on early versions of the script, but what he envisioned wasn’t what the studio had in mind, so he too, exited the production).

After arriving at ‘The Colony,’ Karen and Bill meet an assortment of people: one couple is married and seem to possess cheerful dispositions; others, like Emmy award winner, John Carradine’s (The Grapes of Wrath) character, Erle, wants to commit suicide; another of the group’s members, the sultry looking, Marsha (Elisabeth Brooks), who lives at ‘The Colony’ with her brother T.C. (Don McLeod), takes an immediate interest in Bill and the feeling is mutual. Karen receives therapy, while Bill does his best to occupy his time with activities such as going on a hunting trip with the other men of ‘The Colony,’ which include among their number, Slim Picken’s (Dr. Strangelove) character, Sheriff Sam Newfield. Instead of helping to ease Karen’s dark thoughts, the place is having the opposite effect. Cows are being mutilated, and during the evenings, while trying to sleep, she is kept awake by the howling of wolves. One night, Bill takes it upon himself to investigate, and for his trouble, he is attacked by something. Afterward, Bill, who was a vegetarian prior to his encounter in the woods, not only takes to eating meat, but he can’t resist his urges to cheat on his wife, with Marsha.

Karen calls Terry and asks her to come out to ‘The Colony’ to keep her company. She and Chris have been investigating the life of Eddie Quist, and have made some startling discoveries; not the least of which, is that his body has disappeared from the morgue. While at ‘The Colony’ Terry figures out, based on a drawing she and Chris found while searching Eddie’s apartment, that he spent time there. Rather than letting Karen know what she has learned and making the case that they should leave, Terry, instead, places a phone call to Chris, and while talking to him, she gets to meet the real Eddie Quist. Chris, who is very concerned, and rightfully so, heads off to ‘The Colony,’ but not before purchasing silver bullets, at an occult-bookstore he and Terry had been to during their investigation. The store is owned and operated by Dick Miller’s (Piranha) character, Walter Paisley.

What was at first meant to be a relaxing and therapeutic escape, turns into a nightmare, when it is discovered, that the other guests at the secluded location, are anything but human. Instead, they are werewolves, and ‘The Colony,’ acts as a place for them to be their true selves. Will Chris make it in time to save not only Terry, but Karen and Bill as well? Is it too late for Bill? Has whatever attacked him, and the fact that he is under Marsha’s spell, made him lost to the outside world? What is Eddie Quist’s connection to ‘The Colony?’ What are Dr. Waggner’s motivations for setting up such a place? Is it just to have a hunting ground for the werewolves, or does he have another agenda?

Trivia buffs take note: The special effects for the film were originally worked on by Rick Baker, but he left to work for director, John Landis on “American Werewolf in London.” Ten character names, (for example, George Waggner and Freddie Francis), used in the film, were taken from the names of directors of movies about werewolves. One of the sequels to the film, “Howling IV: The Original Nightmare,” was also based on Gary Brandner’s novel. Forest J. Ackerman, the editor of “Famous Monsters of Filmland” has a cameo in the movie as a book store patron; he can be seen carrying copies of the magazine. In addition, B-film producer, Roger Corman, also makes an appearance, toward the beginning of the movie, as a man waiting for Dee Wallace’s Karen to get off a pay phone. Screenwriter John Sayles play the morgue attendant in the film, who relates a story to Terry and Chris, about a man named Stu Walker. Walker was the first person to direct a werewolf film, “Werewolf of London,” after films began to have sound. For fans of 80s horror, and werewolf films in general, who have never seen the movie, this is a must watch.

I was born in Smithtown, New York, and grew up, worked, and lived in various areas of Long Island before moving to Boca Raton, Florida where I now make my home. In addition to being an aspiring writer, I am also an English teacher. I have a Bachelor of Arts in English and a Master’s Degree in Education, both from Adelphi University in Garden City, New York. In my spare time you will find me engrossed in books, watching movies, socializing with friends, or just staying active.
View all posts by robbinsrealm →
This entry was posted in Movies and tagged Belinda Balaski, Christopher Stone, Dee Wallace, Dennis Dugan, Dick Miller, Don McLeod, Elisabeth Brooks, Forest J. Ackerman, Gary Brandner, Joe Dante, John Carradine, John Landis, John Sayles, Kevin McCarthy, Patrick Macnee, Pino Donaggio, Rob Bottin, Robert Picardo, Roger Corman, Stuart Walker, The Howling. Bookmark the permalink.