Daniel Radcliffe (Swiss Army Man) is known the world over for bringing to life the iconic boy wizard, Harry Potter, from the pages of author J.K. Rowling’s best selling series. In the film “Imperium” he trades in his good guy persona, for that of a vile, white supremacist – sort of. Radcliffe’s character, Nate Foster, is an idealistic and intelligent F.B.I. agent, who, at the start of the film, has worked primarily as an analyst. Foster expresses an interest in proving himself in the field. After demonstrating some good interrogation skills, he is tasked by his immediate superior, Angela Zamparo, played by Golden Globe winner Toni Collette (United States of Tara), to go undercover. The mission Foster is given is to infiltrate the workings of a dangerous white power organization. The objective is not to merely capture the bigots who follow the verbal venom spewed by their leadership, but to ingratiate himself to those in charge, in order to find out if large scale acts of domestic terrorism are being planned. One of the people, Zamparo wants Foster to get close to is Dallas Wolf (Tracy Letts), a radical, hatemonger who has his own radio show that caters to the ultra fringe elements of society. (As an aside: Imperium was inspired by the real life undercover work of F.B.I. agent, Michael German). 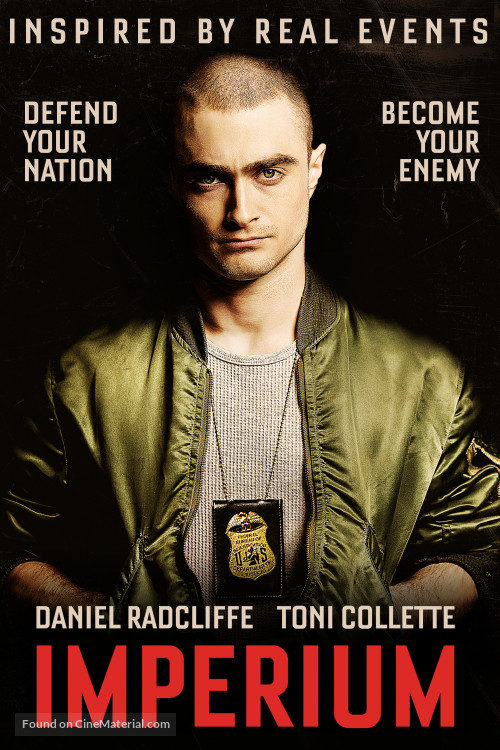 The work is perilous; any slip up on Foster’s part can cost him his life, with people who won’t think twice about executing a traitor. After shaving his head, and committing a plausible back-story to memory, Foster sets out to make contact. Radcliffe’s character soon learns that his presence makes certain members of the movement suspicious as to his true intentions, especially Roy (Seth Numrich). When he first meets Foster, he notices that he is wearing blue jeans. Roy proceeds to ask Nate the idiotic question as to why he would wear a pair of Jew jeans – Levi’s Jeans. Furthermore, from the start, Foster learns that while all members of white power organizations are united by hate, there are different levels of outward or behind the scenes activism and militancy amongst the different factions. For instance, while the stereotypical skinhead characters are present throughout the duration of the movie, so too, are people who would never, based upon outward appearances, be thought of as belonging to such a movement. For example, Sam Trammell’s (True Blood) character, Gerry Conway, has a full head of hair, dresses normally, and is devoid of swastika tattoos. He is the sort of person you might see sitting with his family having dinner in a restaurant, or pass on the street while out walking, and not think twice about him.

Throughout the film Foster has to navigate the fine line between maintaining his cover, while not immersing himself so deep in Neo-Nazi ideology that he forgets his own moral compass. That, in and of itself, is not an easy task, and is brought into play several times throughout the film. Several examples include, Foster being seen by his African-American friend while marching in a parade during a white-power rally, or attempting to defuse a situation where an interracial couple is put in deadly peril.

Will Foster be able to fool the different factions of the white supremacists into believing he is one of them until his task is complete? What major act of domestic terrorism if any is being planned?  If Radcliffe’s character is exposed for being an undercover agent, will he be tortured, or killed outright?  Does Foster have to cross the line in order to preserve his cover? The answers to those questions and more will be learned by the end of the film’s 109 minute runtime.

“Imperium,“ based on Mark German’s story, marks the feature debut for writer and director Daniel Ragussis (Haber). The film was released on the internet, followed by limited release in August of 2016 before premiering on the festival circuit on September 9, 2016 at the Deauville Film Festival in France. The film boasts a solid performance by Radcliffe, and a few well placed moments of tension. “Imperium,“ which comprises the genres of crime, drama, and thriller, will most likely appeal to Radcliffe’s fan base, who have seen him continue to evolve in a positive way as an actor since Harry Potter. Additionally, it should appeal to  those of you who enjoy stories of individuals who risk it all to make the world a safer place.

I was born in Smithtown, New York, and grew up, worked, and lived in various areas of Long Island before moving to Boca Raton, Florida where I now make my home. In addition to being an aspiring writer, I am also an English teacher. I have a Bachelor of Arts in English and a Master’s Degree in Education, both from Adelphi University in Garden City, New York. In my spare time you will find me engrossed in books, watching movies, socializing with friends, or just staying active.
View all posts by robbinsrealm →
This entry was posted in Movies and tagged Daniel Radcliffe, Daniel Ragussis, Imperium, Michael German, Sam Trammell, Seth Numrich, Toni Collette, Tracy Letts. Bookmark the permalink.