Created by Jeff Rice, and starring Darren McGavin, (A Christmas Story) “Kolchak: The Night Stalker” aired on ABC Television from September 13, 1974 through March 28, 1975. Unfortunately, the momentum generated from two popular and successful television movies, The Night Stalker in 1972 and The Night Strangler in 1973, which preceded the series, wasn’t enough to maintain the show beyond one season. Sadly, all that fans of the series, and of veteran character actor McGavin who passed away in 2006, are left with is the two television movies and twenty episodes of a show, which I could imagine, might be a ratings success today if tweaked properly for modern viewers on networks such as the CW. 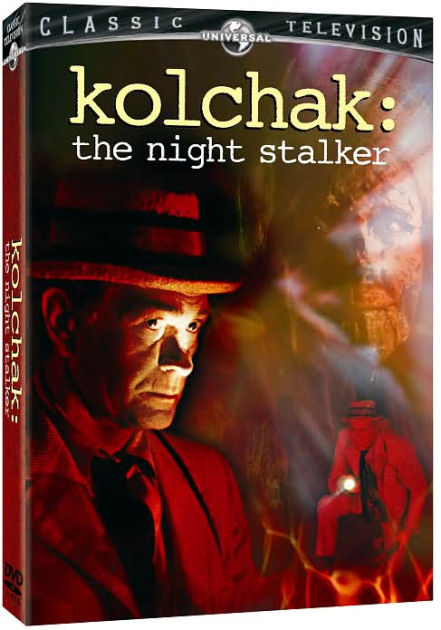 The introduction to the show always began with Chicago newspaper reporter Carl Kolchak walking into the offices of the INS (Independent News Service) accompanied by composer, Gil Melle’s  (Embryo) theme music, which was written a mere twenty minutes prior to the opening being filmed. Kolchak would toss his straw hat, sit down at his desk and begin pounding the keys of his typewriter, diligently working on his latest article. He was always armed with his camera and tape recorder, while driving around the windy city in his Ford Mustang convertible, investigating a crime that was, inevitably, the antithesis of run-of-the mill. No store robberies, muggings, or auto-thefts for Kolchak; no, his reports always contained aspects of the macabre, supernatural, and science-fiction. Sadly for the seersucker suit wearing Carl, the evidence he gathered to support his claims that creatures from the beyond, exist, was usually destroyed, which in turn would lead to him catching the ire of his argumentative editor, Tony Vincenzo, played by former concert violinist turned character actor Simon Oakland (Psycho). Trivia buffs take note: The episode “Chopper” was the first script that writer, director and producer Robert Zemeckis (Back to the Future) and his co-writing collaborator Bob Gale (Used Cars) ever sold in Hollywood.

Loosely based on real-life journalist Charles Fort, the series while short in length was long on impact, most notably, is the praise given to it by two individuals: The first is X-Files creator Chris Carter, who strongly credits it as being a major inspiration in developing the concept for his own X-Files series. Carter didn’t just pay verbal praise to the show. Author and screenwriter Richard Matheson, who wrote the teleplay for The Night Stalker movie and was the writer of The Night Strangler television film, is the name of a character who appears in several episodes of the series. In addition, Carter wanted McGavin to appear on the X-Files as the character of Kolchak. That exact scenario didn’t transpire, but McGavin did appear in several episodes as the character of Arthur Dales, who is a retired FBI agent who was known as the “father of the X-Files.”

In addition to Chris Carter, six-time Emmy winner, David Chase, the creator of the iconic “The Sopranos,” originally came up with the idea for his fictionalized crime family, as a writer on the Kolchak series. In the episode, “The Zombie” directed by three time Oscar nominee Alexander Grasshoff (Journey to the Outer Limits), Chase, who would contribute to writing seven additional episodes of the series, first began to incorporate, into his writing, characters inspired by people in the syndicate. The teleplay for “The Zombie” was co-written by David Chase and Zekial Marko (The Rockford Files) based on a story idea by Marko, but it was Chase that would hold onto the idea, and eventually parlay it into a mega-hit HBO series. Interestingly enough, Chase didn’t want Tony Soprano and his associates to be part of a series, but instead the subject of a film. The episode, the second in the series, originally aired on September 20, 1974. The following opening voice-over by Kolchak sets the episode, which has a runtime of approximately 51 minutes, into motion:

“Popular folklore would have us believe that there exist in the underworld ruthless men who fear nothing. This story should debunk that myth. August 14th, 2:00am. While the upper strata of the syndicate were accustomed to dealing in millions, the foundation of their fortunes was here in their counting houses, in the small change of the numbers racket. Mr. Albert Berg, head collections man; a graduate of an Ivy League business school, he was an incompetent even by syndicate standards. About the only smart thing he’d ever done was marry the boss’s sister. Willie Pike – he’d never been convicted of anything, by anybody, except by the boxing commission. Willie took a dive into the canvass, and on through into the bulletproof car set. Willie was making a bundle; a bundle he would never get to spend.”

The episode places at odds, members of the Mafia versus a Chicago street gang. Former professional football player, and the Rookie of the Year for 1961, defensive lineman Earl Faison, plays Francois Edmonds, a numbers runner, who is murdered. As retaliation for his death, his mother, Marie Juliette Edmonds known as Mamalois Edmonds (Paulene Myers), who practices voodoo, resurrects Faison as a zombie. She sets the zombie out to kill everyone that had anything to do with his murder. Captain Leo Winwood, a corrupt cop, portrayed by Emmy nominee Charles Aidman, is working with the Mafia. He is having a hard time protecting the interests of the crime family run by  Benjamin Sposato (Joseph Sirola), and underboss, Victor Friese (Val Bisoglio). Their men are being killed, and he is worried that his ties to organized crime will be detected. Kolchak’s investigation, thanks to the paid help of morgue attendant Gordon ‘Gordy the Ghoul’ Spangler, a role acted by John Fiedler (12 Angry Men), and a mysterious character, known as ‘The Monk’ (Ben Frommer), finds that criminals are dying from more than just gunshots and cut throats. In addition to the aforementioned, the episode also features Grammy nominee, Scatman Crothers (The Shinning), and Antonio Fargas, who, among many other projects, would go on to achieve fame as the character of Huggy Bear on the television series “Starsky & Hutch.” 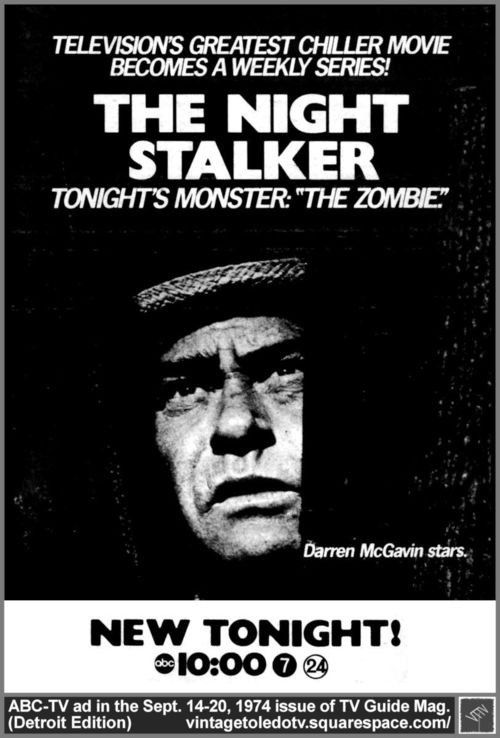 Acting on information given to him by ‘The Monk,’ Kolchak witnesses a meeting inside a garage between Sposato and Weldon. Threats and accusations are made from each of the warring sides; Sposato demanding retribution for the death of his men, Weldon dismissing it as bluster. Kolchak gets the meeting on tape, but he is discovered before he can get the evidence into the hands of the proper authorities. Sposato’s guys grab Kolchak and he is brought before the irate boss to learn his fate. In a last ditch effort to save himself, Kolchak informs Sposato, that he knows who is killing his crew. Sposato doesn’t believe it when he tells him that it is Francois Edmonds. He knows a hit was ordered and carried out on Edmonds. Kolchak begs Sposato for an opportunity to prove that what he’s saying is true;  at the cemetery, after Kolchak digs up Edmonds coffin, and they see, that as he said it would be, the body is gone.

Can the zombie be stopped? If it can, how? Does Kolchak prove its existence to the right people? What happens to the remaining members of the Sposato family? Will Captain Winwood’s association with organized crime be exposed? Everything will be answered by the end of the episode.

The distinct vintage aesthetic is what originally drew me to the series when I saw it while watching a marathon on television back in the early 2000’s. The special effects would be considered hokey by today’s standards, and perhaps a bit laughable even back in the early 1970s, but that is a small price to pay for a series that exuded such charm as it journeyed through mystery, noir, and urban legends and delivered, for the most part, entertaining stories. The show did, for its one and only season, use the ‘monster of the week’ formula to entertain the viewing audience, but I believe, like the first season of other shows of its genre, that would have changed had the series been allowed to continue. I sense that Kolchak eventually would have moved away from that type of storytelling and would have been geared towards more intricate scenarios, which in turn would have made the series vastly more interesting.

For those of you interested in watching the episode I covered, or the series, Netflix had the entire series available to stream instantly, but has since removed it. As of the writing of this blog, all of the episodes are available to watch on YouTube.com. While leaving much more to the imagination than is actually ever shown on the screen, Kolchak is vintage fun. 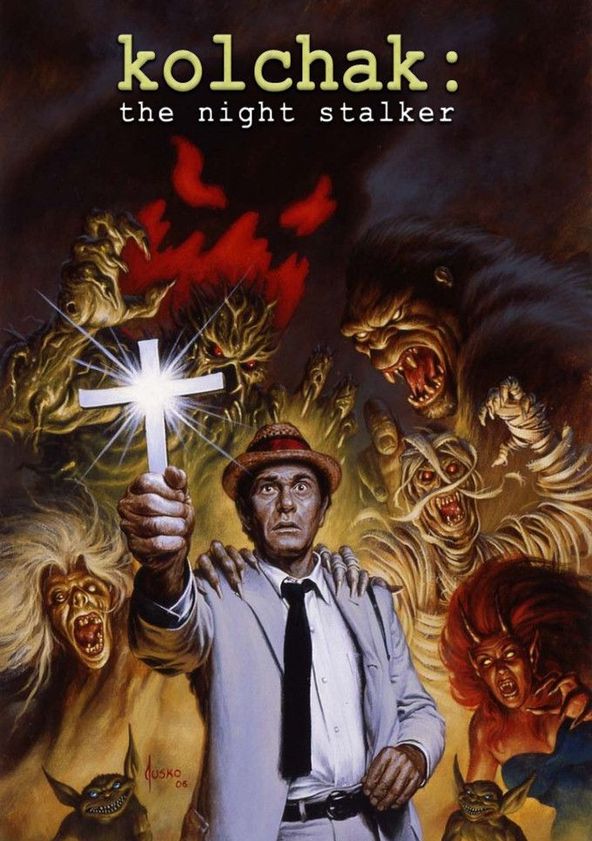 I was born in Smithtown, New York, and grew up, worked, and lived in various areas of Long Island before moving to Boca Raton, Florida where I now make my home. In addition to being an aspiring writer, I am also an English teacher. I have a Bachelor of Arts in English and a Master’s Degree in Education, both from Adelphi University in Garden City, New York. In my spare time you will find me engrossed in books, watching movies, socializing with friends, or just staying active.
View all posts by robbinsrealm →
This entry was posted in TV Series and tagged Alexander Grasshoff, Antonio Fargas, Ben Frommer, Bob Gale, Charles Aidman, Charles Fort, Chris Carter, Darren McGavin, David Chase, Earl Faison, Gil Melle, Jeff Rice, John Fiedler, Joseph Sirola, Kolchak: The Night Stalker, Paulene Myers, Richard Matheson, Robert Zemeckis, Scatman Crothers, Simon Oakland, Val Bisoglio, Zekial Marko. Bookmark the permalink.

6 Responses to “Kolchak Episode – The Inspiration for Chase’s Sopranos”